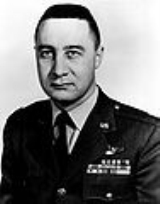 Overview
Virgil Ivan Grissom (Lt Col
Lieutenant Colonel (United States)
In the United States Army, United States Air Force, and United States Marine Corps, a lieutenant colonel is a field grade military officer rank just above the rank of major and just below the rank of colonel. It is equivalent to the naval rank of commander in the other uniformed services.The pay...
, USAF), better known as Gus Grissom, was one of the original NASA
NASA
The National Aeronautics and Space Administration is the agency of the United States government that is responsible for the nation's civilian space program and for aeronautics and aerospace research...
Project Mercury
Project Mercury
In January 1960 NASA awarded Western Electric Company a contract for the Mercury tracking network. The value of the contract was over $33 million. Also in January, McDonnell delivered the first production-type Mercury spacecraft, less than a year after award of the formal contract. On February 12,...
astronaut
Astronaut
An astronaut or cosmonaut is a person trained by a human spaceflight program to command, pilot, or serve as a crew member of a spacecraft....
s and a United States Air Force
United States Air Force
The United States Air Force is the aerial warfare service branch of the United States Armed Forces and one of the American uniformed services. Initially part of the United States Army, the USAF was formed as a separate branch of the military on September 18, 1947 under the National Security Act of...
pilot
Aviator
An aviator is a person who flies an aircraft. The first recorded use of the term was in 1887, as a variation of 'aviation', from the Latin avis , coined in 1863 by G. de la Landelle in Aviation Ou Navigation Aérienne...
. He was the second American
United States
The United States of America is a federal constitutional republic comprising fifty states and a federal district...
to fly in space and the first NASA astronaut
NASA Astronaut Corps
The NASA Astronaut Corps is a unit of the United States National Aeronautics and Space Administration that selects, trains, and provides astronauts as crew members for U.S. and international space missions.-History:...
to fly in space twice.

What bases did gus serve in during wwii. my dad believes he may have been in camp with him.
More
x