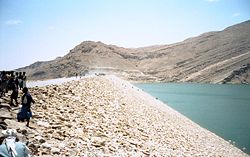 The Marib or Ma'rib or Ma'arib Dam blocks the Wadi Adhanah (also Dhana or Adhana) in the valley of Dhana in the Balaq Hills, Yemen
Yemen
The Republic of Yemen , commonly known as Yemen , is a country located in the Middle East, occupying the southwestern to southern end of the Arabian Peninsula. It is bordered by Saudi Arabia to the north, the Red Sea to the west, and Oman to the east....
. The current dam is close to the ruins
Ruins
Ruins are the remains of human-made architecture: structures that were once complete, as time went by, have fallen into a state of partial or complete disrepair, due to lack of maintenance or deliberate acts of destruction...
of the Great Dam of Marib, dating from around the eighth century BC. It was one of the engineering
Engineering
Engineering is the discipline, art, skill and profession of acquiring and applying scientific, mathematical, economic, social, and practical knowledge, in order to design and build structures, machines, devices, systems, materials and processes that safely realize improvements to the lives of...
wonders of the ancient world and a central part of the south Arabian
South Arabian
The Modern South Arabian languages are spoken mainly by minority populations in the Arabian Peninsula in Yemen and Oman, which, together with the Ethiopian Semitic languages, form the Western South Semitic branch. In his glottochronology-based classification, A...
civilization
Civilization
Civilization is a sometimes controversial term that has been used in several related ways. Primarily, the term has been used to refer to the material and instrumental side of human cultures that are complex in terms of technology, science, and division of labor. Such civilizations are generally...
around Marib.


The Great Dam of Marib

The site of the great Dam of Marib (Sudd Marib) is upstream
Source (river or stream)
The source or headwaters of a river or stream is the place from which the water in the river or stream originates.-Definition:There is no universally agreed upon definition for determining a stream's source...
(south-west) of the ancient city of Marib, once the capital of the Kingdom of Saba'a
Sheba
Sheba was a kingdom mentioned in the Jewish scriptures and the Qur'an...
, believed to be the kingdom
Monarchy
A monarchy is a form of government in which the office of head of state is usually held until death or abdication and is often hereditary and includes a royal house. In some cases, the monarch is elected...
of the legendary
Legend
A legend is a narrative of human actions that are perceived both by teller and listeners to take place within human history and to possess certain qualities that give the tale verisimilitude...
Queen of Sheba. The Kingdom of Saba'a was a prosperous trading nation, with control of the frankincense and spice routes in Arabia and Abyssinia
Ethiopia
Ethiopia , officially known as the Federal Democratic Republic of Ethiopia, is a country located in the Horn of Africa. It is the second-most populous nation in Africa, with over 82 million inhabitants, and the tenth-largest by area, occupying 1,100,000 km2...
. The Sabaens built the dam to capture the periodic monsoon
Monsoon
Monsoon is traditionally defined as a seasonal reversing wind accompanied by corresponding changes in precipitation, but is now used to describe seasonal changes in atmospheric circulation and precipitation associated with the asymmetric heating of land and sea...
rains which falls on the nearby mountains and so irrigate the land around the city.

Recent archaeological
Archaeology
Archaeology, or archeology , is the study of human society, primarily through the recovery and analysis of the material culture and environmental data that they have left behind, which includes artifacts, architecture, biofacts and cultural landscapes...
findings suggest that simple earth dams and a canal
Canal
Canals are man-made channels for water. There are two types of canal:#Waterways: navigable transportation canals used for carrying ships and boats shipping goods and conveying people, further subdivided into two kinds:...
network were constructed as far back as 2000 BC. The building of the first Marib dam began somewhere between 1750 BC and 1700 BC.

The Makrib Ali Yanouf Bin Dhamar Ali (c. 790 BC) had his name carved into parts of the dam to mark the completion\reparation of the dam. The dam was of packed earth, triangular in cross section
Cross section (geometry)
In geometry, a cross-section is the intersection of a figure in 2-dimensional space with a line, or of a body in 3-dimensional space with a plane, etc...
, 580 m in length and 4 metres high. It ran between two groups of rocks on either side of the river and was linked to the rock with substantial stonework. The dam's position allowed for a spillway
Spillway
A spillway is a structure used to provide the controlled release of flows from a dam or levee into a downstream area, typically being the river that was dammed. In the UK they may be known as overflow channels. Spillways release floods so that the water does not overtop and damage or even destroy...
and sluice
Sluice
A sluice is a water channel that is controlled at its head by a gate . For example, a millrace is a sluice that channels water toward a water mill...
s between the northern end of the dam and the cliff
Cliff
In geography and geology, a cliff is a significant vertical, or near vertical, rock exposure. Cliffs are formed as erosion landforms due to the processes of erosion and weathering that produce them. Cliffs are common on coasts, in mountainous areas, escarpments and along rivers. Cliffs are usually...
s to the west. Around 500 BC the dam height was increased to 7 metres, the upstream slope
Slope
In mathematics, the slope or gradient of a line describes its steepness, incline, or grade. A higher slope value indicates a steeper incline....
(the water face) was reinforced with a cover of stones, and irrigation was extended to include the southern side as well as the northern side.

After the end of the Kingdom of Sheba, possession of the dam came to the Himyarites in around 115 BC. They undertook a further reconstruction, creating a structure 14 metres high with extensive water works at both the northern and southern ends - with five spillway channels, two masonry
Masonry
Masonry is the building of structures from individual units laid in and bound together by mortar; the term masonry can also refer to the units themselves. The common materials of masonry construction are brick, stone, marble, granite, travertine, limestone; concrete block, glass block, stucco, and...
-reinforced sluices, a settling pond
Pond
A pond is a body of standing water, either natural or man-made, that is usually smaller than a lake. A wide variety of man-made bodies of water are classified as ponds, including water gardens, water features and koi ponds; all designed for aesthetic ornamentation as landscape or architectural...
, and a 1000 metre canal to a distribution tank
Water tank
A Water tank is a container for storing water. The need for a water tank is as old as civilized man, providing storage of water for drinking water, irrigation agriculture, fire suppression, agricultural farming, both for plants and livestock, chemical manufacturing, food preparation as well as many...
. These extensive works were not actually finalised until 325 AD and allowed the irrigation
Irrigation
Irrigation may be defined as the science of artificial application of water to the land or soil. It is used to assist in the growing of agricultural crops, maintenance of landscapes, and revegetation of disturbed soils in dry areas and during periods of inadequate rainfall...
of 25,000 acres (100 km²).

Despite the increases in height, the dam suffered numerous breaches (recorded major incidents occurred in 449, 450, 542 and 548) and the maintenance work became increasingly onerous; the last recorded repairs took place in 557. In 570 or 575, the dam was again overtopped, and this time left unrepaired. The final destruction of the dam is noted in the Qur'an
Qur'an
The Quran , also transliterated Qur'an, Koran, Alcoran, Qur’ān, Coran, Kuran, and al-Qur’ān, is the central religious text of Islam, which Muslims consider the verbatim word of God . It is regarded widely as the finest piece of literature in the Arabic language...
and the consequent failure of the irrigation system provoked the migration of up to 50,000 people.

In 1986 a new 38 m high, 763 m long, earth dam was completed across the Wadi Dhana, creating a storage capacity of 398 million cubic metres. The dam site is located 3 km upstream of the ruins of the old Marib dam. The new dam was designed to store water for irrigating the Marib plains.

The current dam was financed by UAE founder Sheikh Zayed, whose tribe resettled from Marib to current UAE in about 17th century.
The source of this article is wikipedia, the free encyclopedia.  The text of this article is licensed under the GFDL.