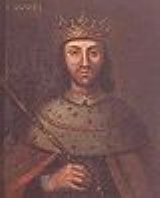 Encyclopedia
Manuel I the Fortunate (Port.
Portuguese language
Portuguese is a Romance language that arose in the medieval Kingdom of Galicia, nowadays Galicia and Northern Portugal. The southern part of the Kingdom of Galicia became independent as the County of Portugal in 1095...
o Venturoso), 14th king of Portugal and the Algarves (Alcochete, May 31, 1469 – December 13, 1521 in Lisbon
Lisbon
Lisbon is the capital city and largest city of Portugal with a population of 545,245 within its administrative limits on a land area of . The urban area of Lisbon extends beyond the administrative city limits with a population of 3 million on an area of , making it the 9th most populous urban...
) was the son of Infante Ferdinand, Duke of Viseu, (1433–1470), by his wife, Infanta Beatrice of Portugal
Beatriz of Portugal (1430-1506)
Infanta Beatriz of Portugal was a Portuguese infanta daughter of Infante João, Lord of Reguengos and Isabella of Braganza a daughter of Afonso, 1st Duke of Braganza.-Biography:Due to the Aviz dynasty marriage policy, Beatrice was 1st cousin and sister-in-law of king Afonso V of Portugal,...
. His name is associated with a period of Portuguese civilization distinguished by significant achievements both in political affairs and the arts. In spite of its small size and population in comparison to the great land powers of Europe, it was able to acquire an overseas empire of vast proportions during Manuel's reign. 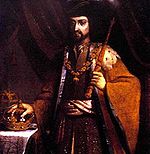 Manuel grew up amidst conspiracies of the Portuguese upper nobility against King John II. He was aware of many people being killed and exiled. His older brother Diogo, the duke of Viseu
Diogo, Duke of Viseu
Infante Diogo of Viseu was the second son of Infante Fernando, Duke of Viseu, and his wife Beatriz of Portugal.In 1472, when his older brother John, Duke of Viseu, died without issue, Diogo inherited his titles and estates as 4th Duke of Viseu and 3rd Duke of Beja.Diogo was a popular personality...
, was stabbed to death in 1484 by the king himself.

Manuel thus had every reason to worry when he received a royal order in 1493 to present himself to the king, but his fears were groundless: John II wanted to name him heir to the throne, after the death of his son, Prince Afonso, and the failed attempts to legitimise Jorge, Duke of Coimbra, his illegitimate son. As a result of this stroke of luck he was nicknamed the Fortunate.

Manuel would prove a worthy successor to his cousin John II, supporting the Portuguese exploration of the Atlantic Ocean
Atlantic Ocean
The Atlantic Ocean is the second-largest of the world's oceanic divisions. With a total area of about , it covers approximately 20% of the Earth's surface and about 26% of its water surface area...
and the development of Portuguese commerce. During his reign, the following was achieved:

All these events made Portugal
Portugal
Portugal , officially the Portuguese Republic is a country situated in southwestern Europe on the Iberian Peninsula. Portugal is the westernmost country of Europe, and is bordered by the Atlantic Ocean to the West and South and by Spain to the North and East. The Atlantic archipelagos of the...
rich on foreign trade while it formally established a vast overseas empire. Manuel used the wealth to build a number of royal buildings (in the Manueline style) and to attract scientists and artists to his court. Commercial treaties and diplomatic alliances were forged with China
China
Chinese civilization may refer to:* China for more general discussion of the country.* Chinese culture* Greater China, the transnational community of ethnic Chinese.* History of China* Sinosphere, the area historically affected by Chinese culture...
and the Persian Empire. The Pope received a monumental embassy from Portugal during his reign designed to draw attention to Portugal's newly-acquired riches to all of Europe.

In Manuel's reign, royal absolutism was the method of government. The Portuguese Cortes
Portuguese Cortes
In the Medieval Kingdom of Portugal, the Cortes was an assembly of representatives of the estates of the realm - the nobility, clergy and bourgeoisie. It was called and dismissed by the King of Portugal at will, at a place of his choosing...
(the assembly of the kingdom) only met three times during his reign, always in Lisbon
Lisbon
Lisbon is the capital city and largest city of Portugal with a population of 545,245 within its administrative limits on a land area of . The urban area of Lisbon extends beyond the administrative city limits with a population of 3 million on an area of , making it the 9th most populous urban...
, the king's seat. He reformed the courts of justice and the municipal charters with the crown, modernizing taxes and the concepts of tributes and rights. 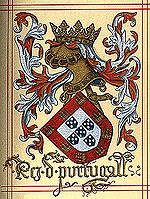 Manuel was a very religious man and invested a large amount of Portuguese income to sponsor missionaries to the new colonies, such as Francisco Álvares
Francisco Álvares
Francisco Álvares was a Portuguese missionary and explorer. In 1515 he traveled to Ethiopia as part of the Portuguese embassy to emperor Lebna Dengel accompanied by returning Ethiopian ambassador Matheus. The embassy arrived only in 1520 to Ethiopia where he joined long sought Portuguese envoy...
, and the construction of religious buildings, such as the Monastery of Jerónimos. Manuel also endeavoured to promote another crusade against the Turks.

His relationship with the Portuguese Jews started out well. At the outset of his reign, he released all the Jews who had been made captive during the reign of John II. Unfortunately for the Jews, he decided that he wanted to marry Infanta Isabella of Aragon, then heiress of the future united crown of Spain (widow of his nephew Prince Afonso). Ferdinand and Isabella had expelled the Jews
Alhambra decree
The Alhambra Decree was an edict issued on 31 March 1492 by the joint Catholic Monarchs of Spain ordering the expulsion of Jews from the Kingdom of Spain and its territories and possessions by 31 July of that year.The edict was formally revoked on 16 December 1968, following the Second...
in 1492, and would never marry their daughter to the king of a country that still tolerated their presence.
In December 1496, it was decreed that any Jew who did not convert to Christianity would be expelled from the country
History of the Jews in Portugal
The history of the Jews in Portugal reaches back over two thousand years and is directly related to Sephardi history, a Jewish ethnic division that represents communities who have originated in the Iberian Peninsula .-Before Portugal:...
. However, those expelled could only leave the country in ships specified by the king. When those who chose expulsion arrived at the port in Lisbon, they were met by clerics and soldiers who used force, coercion, and promises in order to baptize them and prevent them from leaving the country. This period of time technically ended the presence of Jews in Portugal. Afterwards, all converted Jews and their descendants would be referred to as "New Christians", and they were given a grace period of thirty years in which no inquiries into their faith would be allowed; this was later extended to end in 1534.

A popular riot in 1504 ended in the death of two thousand Jews; the leaders of the riot were executed by Manuel.

Isabella died in childbirth in 1498, putting a damper on Portuguese ambitions to rule in Spain, which various rulers had harbored since the reign of King Ferdinand I
Ferdinand I of Portugal
Ferdinand I , sometimes referred to as the Handsome or rarely as the Inconstant , was the ninth King of Portugal and the Algarve, the second son of Peter I and his wife, Constance of Castile...
(1367–1383). Manuel and Isabella's young son Miguel was for a period the heir apparent of Castile and Aragon, but his death in 1500 ended these ambitions. Manuel's next wife, Maria of Aragon
Maria of Aragon
Maria of Aragon may refer to:*Marie of Montpellier , wife of Peter II of Aragon*Maria of Aragon , daughter of James I of Aragon and Violant of Hungary, became a nun...
, was his first wife's sister, but not the oldest surviving one. That was rather Joanna of Castile
Joanna of Castile
Joanna , nicknamed Joanna the Mad , was the first queen regnant to reign over both the Crown of Castile and the Crown of Aragon , a union which evolved into modern Spain...
, who had issue.

In 1506 the Pope Julius II gave Manuel I a Golden Rose
Golden Rose
The Golden Rose is a gold ornament, which popes of the Catholic Church have traditionally blessed annually. It is occasionally conferred as a token of reverence or affection...
. Later in 1514 Pope Leo X also gave Manuel I a second Golden Rose. Manuel I became the first individual to receive more than one Golden Rose.

The Jerónimos Monastery in Lisbon houses Manuel's tomb. His son João succeeded him as king.

Negotiations for a marriage between Manuel and Elizabeth of York
Elizabeth of York
Elizabeth of York was Queen consort of England as spouse of King Henry VII from 1486 until 1503, and mother of King Henry VIII of England....
in 1485 were halted by the death of Richard III of England
Richard III of England
Richard III was King of England for two years, from 1483 until his death in 1485 during the Battle of Bosworth Field. He was the last king of the House of York and the last of the Plantagenet dynasty...
. He went on to marry three times. His first wife was Isabella of Aragon, princess of Spain and widow of the previous Prince of Portugal Afonso. Next he married another princess of Spain, Maria of Aragon
Maria of Aragon (1482-1517)
Maria of Aragon was a Spanish infanta and the second wife of Portuguese King Manuel I, thus queen consort of Portugal from her marriage on 30 October 1500 until her death.-Family:She was born at Córdoba on 29 June 1482 as the third surviving daughter of Isabella I of...
(his first wife's sister), then Eleanor of Austria, a niece of his first two wives who Francis I of France
Francis I of France
Francis I was King of France from 1515 until his death. During his reign, huge cultural changes took place in France and he has been called France's original Renaissance monarch...
after Manuel's death.