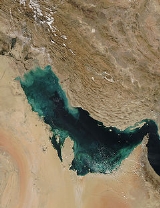 Overview
The Persian Gulf, in Southwest Asia
Southwest Asia
Western Asia, West Asia, Southwest Asia or Southwestern Asia are terms that describe the westernmost portion of Asia. The terms are partly coterminous with the Middle East, which describes a geographical position in relation to Western Europe rather than its location within Asia...
, is an extension of the Indian Ocean
Indian Ocean
The Indian Ocean is the third largest of the world's oceanic divisions, covering approximately 20% of the water on the Earth's surface. It is bounded on the north by the Indian Subcontinent and Arabian Peninsula ; on the west by eastern Africa; on the east by Indochina, the Sunda Islands, and...
located between Iran
Iran
Iran , officially the Islamic Republic of Iran , is a country in Southern and Western Asia. The name "Iran" has been in use natively since the Sassanian era and came into use internationally in 1935, before which the country was known to the Western world as Persia...
(Persia) and the Arabian Peninsula
Arabian Peninsula
The Arabian Peninsula is a land mass situated north-east of Africa. Also known as Arabia or the Arabian subcontinent, it is the world's largest peninsula and covers 3,237,500 km2...
.

The Persian Gulf was the focus of the 1980–1988 Iran-Iraq War
Iran-Iraq War
The Iran–Iraq War was an armed conflict between the armed forces of Iraq and Iran, lasting from September 1980 to August 1988, making it the longest conventional war of the twentieth century...
, in which each side attacked the other's oil tanker
Oil tanker
An oil tanker, also known as a petroleum tanker, is a merchant ship designed for the bulk transport of oil. There are two basic types of oil tankers: the crude tanker and the product tanker. Crude tankers move large quantities of unrefined crude oil from its point of extraction to refineries...
s. In 1991, the Persian Gulf again was the background for what was called the "Persian Gulf War" or the "Gulf War" when Iraq
Iraq
Iraq ; officially the Republic of Iraq is a country in Western Asia spanning most of the northwestern end of the Zagros mountain range, the eastern part of the Syrian Desert and the northern part of the Arabian Desert....
invaded Kuwait and was subsequently pushed back, despite the fact that this conflict was primarily a land conflict.

The Persian Gulf has many good fishing grounds, extensive coral reef
Coral reef
Coral reefs are underwater structures made from calcium carbonate secreted by corals. Coral reefs are colonies of tiny living animals found in marine waters that contain few nutrients. Most coral reefs are built from stony corals, which in turn consist of polyps that cluster in groups. The polyps...
s, and abundant pearl oyster
Pearl oyster
Pearl oysters are saltwater clams, marine bivalve molluscs of the genus Pinctada in the family Pteriidae. They have a strong inner shell layer composed of nacre, also known as "mother of pearl"....
s, but its ecology has come under pressure from industrialization, and in particular, oil
Oil
An oil is any substance that is liquid at ambient temperatures and does not mix with water but may mix with other oils and organic solvents. This general definition includes vegetable oils, volatile essential oils, petrochemical oils, and synthetic oils....
and petroleum
Petroleum
Petroleum or crude oil is a naturally occurring, flammable liquid consisting of a complex mixture of hydrocarbons of various molecular weights and other liquid organic compounds, that are found in geologic formations beneath the Earth's surface. Petroleum is recovered mostly through oil drilling...
spillages during wars in the region.

Historically and internationally known as the Persian Gulf, this body of water is sometimes controversially referred to as the Arabian Gulf or simply The Gulf by most Arab states, although neither of the latter two terms are recognized internationally.

Why is the persian gulf important to iran
More

Google and the Persian Gulf