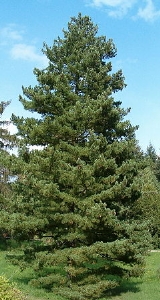 Encyclopedia
Pinus peuce (Macedonian
Macedonian language
Macedonian is a South Slavic language spoken as a first language by approximately 2–3 million people principally in the region of Macedonia but also in the Macedonian diaspora...
: Молика, Molika) is a species of pine
Pine
Pines are trees in the genus Pinus ,in the family Pinaceae. They make up the monotypic subfamily Pinoideae. There are about 115 species of pine, although different authorities accept between 105 and 125 species.-Etymology:...
native to the mountains of Macedonia, Bulgaria
Bulgaria
Bulgaria , officially the Republic of Bulgaria , is a parliamentary democracy within a unitary constitutional republic in Southeast Europe. The country borders Romania to the north, Serbia and Macedonia to the west, Greece and Turkey to the south, as well as the Black Sea to the east...
, Albania
Albania
Albania , officially known as the Republic of Albania , is a country in Southeastern Europe, in the Balkans region. It is bordered by Montenegro to the northwest, Kosovo to the northeast, the Republic of Macedonia to the east and Greece to the south and southeast. It has a coast on the Adriatic Sea...
, Montenegro
Montenegro
Montenegro Montenegrin: Crna Gora Црна Гора , meaning "Black Mountain") is a country located in Southeastern Europe. It has a coast on the Adriatic Sea to the south-west and is bordered by Croatia to the west, Bosnia and Herzegovina to the northwest, Serbia to the northeast and Albania to the...
, Kosovo
Kosovo
Kosovo is a region in southeastern Europe. Part of the Ottoman Empire for more than five centuries, later the Autonomous Province of Kosovo and Metohija within Serbia...
, the extreme southwest of Serbia
Serbia
Serbia , officially the Republic of Serbia , is a landlocked country located at the crossroads of Central and Southeast Europe, covering the southern part of the Carpathian basin and the central part of the Balkans...
, and the extreme north of Greece
Greece
Greece , officially the Hellenic Republic , and historically Hellas or the Republic of Greece in English, is a country in southeastern Europe....
, growing typically at (600-) 1,000-2,200 (-2,300) m altitude. It often reaches the alpine tree line in this area. The mature size is up to 35–40 m height, and 1.5 m trunk diameter.
It is a member of the white pine
Pinus classification
There are three main subgenera of Pinus, the subgenus Strobus , the subgenus Ducampopinus , and the subgenus Pinus...
group, Pinus subgenus Strobus, and like all members of that group, the leaves ('needles') are in fascicles (bundles) of five, with a deciduous sheath. They are 6–11 cm long. Macedonian Pine cones are mostly 8–16 cm long, occasionally up to 20 cm long, green at first, becoming yellow-brown when mature, with broad, flat to downcurved scales. The 6–7 mm long seed
Seed
A seed is a small embryonic plant enclosed in a covering called the seed coat, usually with some stored food. It is the product of the ripened ovule of gymnosperm and angiosperm plants which occurs after fertilization and some growth within the mother plant...
s have a 2 cm wing and can be wind-dispersed, but are also very often dispersed by Spotted Nutcracker
Spotted Nutcracker
The Spotted Nutcracker, Eurasian Nutcracker, or just Nutcracker, is a passerine bird slightly larger than the Eurasian Jay. It has a much larger bill and a slimmer looking head without any crest. The feathering over its body is predominantly a chocolate brown with distinct white spots and streaks...
s.

Like other European and Asia
Asia
Asia is the world's largest and most populous continent, located primarily in the eastern and northern hemispheres. It covers 8.7% of the Earth's total surface area and with approximately 3.879 billion people, it hosts 60% of the world's current human population...
n white pines, Macedonian Pine is very resistant to White Pine Blister Rust (Cronartium ribicola). This fungal disease was accidentally introduced from Europe
Europe
Europe is, by convention, one of the world's seven continents. Comprising the westernmost peninsula of Eurasia, Europe is generally 'divided' from Asia to its east by the watershed divides of the Ural and Caucasus Mountains, the Ural River, the Caspian and Black Seas, and the waterways connecting...
into North America
North America
North America is a continent wholly within the Northern Hemisphere and almost wholly within the Western Hemisphere. It is also considered a northern subcontinent of the Americas...
, where it has caused severe mortality in the American native white pines (e.g. Western White Pine
Western White Pine
Western White Pine, Pinus monticola in the family Pinaceae, is a species of pine that occurs in the mountains of the western United States and Canada, specifically the Sierra Nevada, the Cascade Range, the Coast Range, and the northern Rocky Mountains. The tree extends down to sea level in many...
, Sugar Pine
Sugar Pine
Pinus lambertiana, commonly known as the sugar pine or sugar cone pine, is the tallest and most massive pine, with the longest cones of any conifer...
, Whitebark Pine
Whitebark Pine
Pinus albicaulis, known commonly as Whitebark Pine, Pitch Pine, Scrub Pine, and Creeping Pine occurs in the mountains of the Western United States and Canada, specifically the subalpine areas of the Sierra Nevada, the Cascade Range, the Pacific Coast Ranges, and the northern Rocky Mountains –...
) in many areas. Macedonian Pine is of great value for research into hybridisation and genetic modification to develop rust resistance in these species; hybrids with Eastern White Pine
Eastern White Pine
Pinus strobus, commonly known as the eastern white pine, is a large pine native to eastern North America, occurring from Newfoundland west to Minnesota and southeastern Manitoba, and south along the Appalachian Mountains to the northern edge of Georgia.It is occasionally known as simply white pine,...
inherit some resistance. 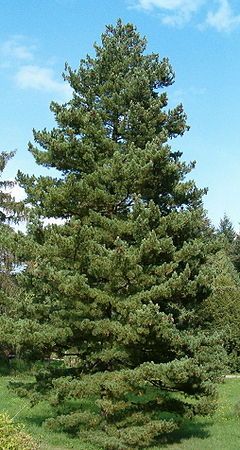 Macedonian Pine is also a popular ornamental tree in park
Park
A park is a protected area, in its natural or semi-natural state, or planted, and set aside for human recreation and enjoyment, or for the protection of wildlife or natural habitats. It may consist of rocks, soil, water, flora and fauna and grass areas. Many parks are legally protected by...
s and large garden
Garden
A garden is a planned space, usually outdoors, set aside for the display, cultivation, and enjoyment of plants and other forms of nature. The garden can incorporate both natural and man-made materials. The most common form today is known as a residential garden, but the term garden has...
s, giving reliable steady though not fast growth on a wide range of sites. It is very tolerant of severe winter cold, hardy down to at least -45°C, and also of wind exposure. It is locally naturalised
Naturalisation (biology)
In biology, naturalisation is any process by which a non-native organism spreads into the wild and its reproduction is sufficient to maintain its population. Such populations are said to be naturalised....
Punkaharju in eastern Finland.

Synonyms include Pinus cembra var. fruticosa Griseb., Pinus excelsa var. peuce (Griseb.) Beissn., Pinus peuce var. vermiculata Christ, and Balkan pine.
The source of this article is wikipedia, the free encyclopedia.  The text of this article is licensed under the GFDL.