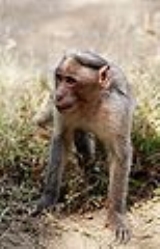 Aside from human
Human
Humans are the only living species in the Homo genus...
s (genus Homo
Homo (genus)
Homo is the genus that includes modern humans and species closely related to them. The genus is estimated to be about 2.3 to 2.4 million years old, evolving from australopithecine ancestors with the appearance of Homo habilis....
), the macaques are the most widespread primate
Primate
A primate is a mammal of the order Primates , which contains prosimians and simians. Primates arose from ancestors that lived in the trees of tropical forests; many primate characteristics represent adaptations to life in this challenging three-dimensional environment...
genus, ranging from Japan
Japan
Japan is an island nation in East Asia. Located in the Pacific Ocean, it lies to the east of the Sea of Japan, China, North Korea, South Korea and Russia, stretching from the Sea of Okhotsk in the north to the East China Sea and Taiwan in the south...
to Afghanistan
Afghanistan
Afghanistan , officially the Islamic Republic of Afghanistan, is a landlocked country located in the centre of Asia, forming South Asia, Central Asia and the Middle East. With a population of about 29 million, it has an area of , making it the 42nd most populous and 41st largest nation in the world...
and, in the case of the barbary macaque
Barbary Macaque
The Barbary Macaque , or Common macaque, is a macaque with no tail. Found in the Atlas Mountains of Algeria and Morocco with a small population, of unknown origin, in Gibraltar, the Barbary Macaque is one of the best-known Old World monkey species. Besides humans, they are the only primates that...
, to North Africa
Maghreb
The Maghreb is the region of Northwest Africa, west of Egypt. It includes five countries: Morocco, Algeria, Tunisia, Libya, and Mauritania and the disputed territory of Western Sahara...
. Twenty-two macaque species are currently recognised, and they include some of the monkeys best known to non-zoologists, such as the rhesus macaque
Rhesus Macaque
The Rhesus macaque , also called the Rhesus monkey, is one of the best-known species of Old World monkeys. It is listed as Least Concern in the IUCN Red List of Threatened Species in view of its wide distribution, presumed large population, and its tolerance of a broad range of habitats...
, Macaca mulatta, and the barbary macaque, M. sylvanus, a colony of which lives on the Rock of Gibraltar
Rock of Gibraltar
The Rock of Gibraltar is a monolithic limestone promontory located in Gibraltar, off the southwestern tip of Europe on the Iberian Peninsula. It is high...
. Although several species lack tails, and their common names therefore refer to them as ape
Ape
Apes are Old World anthropoid mammals, more specifically a clade of tailless catarrhine primates, belonging to the biological superfamily Hominoidea. The apes are native to Africa and South-east Asia, although in relatively recent times humans have spread all over the world...
s, these are true monkeys, with no greater relationship to the true apes than any other Old World monkeys.

In some species skin folds join the second through fifth toes, almost reaching the first metatarsal
Metatarsus
The metatarsus or metatarsal bones are a group of five long bones in the foot located between the tarsal bones of the hind- and mid-foot and the phalanges of the toes. Lacking individual names, the metatarsal bones are numbered from the medial side : the first, second, third, fourth, and fifth...
joint.

Macaques have a very intricate social structure and hierarchy. If a macaque that is lower level in the social chain has eaten berries and there are none left for a higher level macaque, then the one higher in status can, within this social organization, remove the berries from the other monkey's mouth.

Several species of macaque are used extensively in animal testing
Animal testing
Animal testing, also known as animal experimentation, animal research, and in vivo testing, is the use of non-human animals in experiments. Worldwide it is estimated that the number of vertebrate animals—from zebrafish to non-human primates—ranges from the tens of millions to more than 100 million...
, particularly in the neuroscience
Neuroscience
Neuroscience is the scientific study of the nervous system. Traditionally, neuroscience has been seen as a branch of biology. However, it is currently an interdisciplinary science that collaborates with other fields such as chemistry, computer science, engineering, linguistics, mathematics,...
of visual perception
Visual perception
Visual perception is the ability to interpret information and surroundings from the effects of visible light reaching the eye. The resulting perception is also known as eyesight, sight, or vision...
and the visual system
Visual system
The visual system is the part of the central nervous system which enables organisms to process visual detail, as well as enabling several non-image forming photoresponse functions. It interprets information from visible light to build a representation of the surrounding world...
.

Nearly all (73-100%) pet and captive macaques are carriers
Asymptomatic carrier
An asymptomatic carrier is a person or other organism that has contracted an infectious disease, but who displays no symptoms. Although unaffected by the disease themselves, carriers can transmit it to others...
of the herpes B virus
Herpes B Virus
Herpes Simian B virus is the endemic simplexvirus of macaque monkeys. B virus is an alphaherpesvirus, which consists of a subset of herpesviruses that travel within hosts using the peripheral nerves...
. This virus
Virus
A virus is a small infectious agent that can replicate only inside the living cells of organisms. Viruses infect all types of organisms, from animals and plants to bacteria and archaea...
is harmless to macaques, but infections of humans, while rare, are potentially fatal, a risk that makes macaques unsuitable as pets.
A 2005 University of Toronto
University of Toronto
The University of Toronto is a public research university in Toronto, Ontario, Canada, situated on the grounds that surround Queen's Park. It was founded by royal charter in 1827 as King's College, the first institution of higher learning in Upper Canada...
study showed that urban performing macaques also carried simian foamy virus
Simian foamy virus
The simian foamy virus is a spumavirus closely related to the Human Immunodeficiency Virus, HIV, the virus that can lead to AIDS. Its discovery in primates has led to some speculation that HIV may have been spread to the human species in Africa through contact with blood from apes, monkeys, and...
, suggesting they could be involved in the species-to-species jump of similar retroviruses to humans. 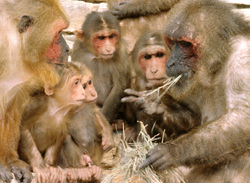 Prehistoric (fossil
Fossil
Fossils are the preserved remains or traces of animals , plants, and other organisms from the remote past...
) species: