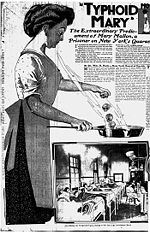 An asymptomatic carrier (healthy carrier or just carrier) is a person or other organism that has contracted an infectious disease
Infectious disease
Infectious diseases, also known as communicable diseases, contagious diseases or transmissible diseases comprise clinically evident illness resulting from the infection, presence and growth of pathogenic biological agents in an individual host organism...
, but who displays no symptoms. Although unaffected by the disease themselves, carriers can transmit it to others. A number of animal species can act as a vector of human disease.

In humans, HIV
HIV
Human immunodeficiency virus is a lentivirus that causes acquired immunodeficiency syndrome , a condition in humans in which progressive failure of the immune system allows life-threatening opportunistic infections and cancers to thrive...
goes through a long latency period, during which the host is asymptomatic. Many carriers are infected with persistent viruses such as EBV
Epstein-Barr virus
The Epstein–Barr virus , also called human herpesvirus 4 , is a virus of the herpes family and is one of the most common viruses in humans. It is best known as the cause of infectious mononucleosis...
and Cytomegalovirus
Cytomegalovirus
Cytomegalovirus is a viral genus of the viral group known as Herpesviridae or herpesviruses. It is typically abbreviated as CMV: The species that infects humans is commonly known as human CMV or human herpesvirus-5 , and is the most studied of all cytomegaloviruses...
that only rarely progress to a disease state.

Mary Mallon
Mary Mallon
Mary Mallon , also known as Typhoid Mary, was the first person in the United States identified as an asymptomatic carrier of the pathogen associated with typhoid fever. She was presumed to have infected some 53 people, three of whom died, over the course of her career as a cook...
, known as "Typhoid Mary", was an asymptomatic carrier of typhoid fever
Typhoid fever
Typhoid fever, also known as Typhoid, is a common worldwide bacterial disease, transmitted by the ingestion of food or water contaminated with the feces of an infected person, which contain the bacterium Salmonella enterica, serovar Typhi...
. She worked as a cook for several families in New York City at the beginning of the twentieth century. Several cases of typhoid fever in members of those families were traced to her by the Health Department. It appeared that she "carried" the infectious agent without becoming sick. There was at the time no way of eradicating the disease, and an attempt was made to restrict her from continuing to work as a cook to avoid spreading it to others.

Although unlikely, it is possible that Edgar Allan Poe
Edgar Allan Poe
Edgar Allan Poe was an American author, poet, editor and literary critic, considered part of the American Romantic Movement. Best known for his tales of mystery and the macabre, Poe was one of the earliest American practitioners of the short story and is considered the inventor of the detective...
was a carrier of tuberculosis
Tuberculosis
Tuberculosis, MTB, or TB is a common, and in many cases lethal, infectious disease caused by various strains of mycobacteria, usually Mycobacterium tuberculosis. Tuberculosis usually attacks the lungs but can also affect other parts of the body...
, because his mother (Elizabeth Poe) and his wife (Virginia Clemm) died of the disease, though he exhibited no symptoms himself.
The source of this article is wikipedia, the free encyclopedia.  The text of this article is licensed under the GFDL.