Encyclopedia
The metatarsus or metatarsal bones are a group of five long bone
Long bone
The long bones are those that are longer than they are wide. They are one of five types of bones: long, short, flat, irregular and sesamoid. Long bones, especially the femur and tibia, are subjected to most of the load during daily activities and they are crucial for skeletal mobility. They grow...
s in the foot
Foot
The foot is an anatomical structure found in many vertebrates. It is the terminal portion of a limb which bears weight and allows locomotion. In many animals with feet, the foot is a separate organ at the terminal part of the leg made up of one or more segments or bones, generally including claws...
located between the tarsal bones
Tarsus (skeleton)
In tetrapods, the tarsus is a cluster of articulating bones in each foot situated between the lower end of tibia and fibula of the lower leg and the metatarsus. In the foot the tarsus articulates with the bones of the metatarsus, which in turn articulate with the bones of the individual toes...
of the hind- and mid-foot and the phalanges
Phalanges of the foot
The Olphalanges of the foot are the bones in the toes. They correspond, in number and general arrangement, with those of the hand; there are two in the big toe, and three in each of the other toes...
of the toes. Lacking individual names, the metatarsal bones are numbered from the medial
Anatomical terms of location
Standard anatomical terms of location are designations employed in science that deal with the anatomy of animals to avoid ambiguities that might otherwise arise. They are not language-specific, and thus require no translation...
side (side of big toe): the first
First metatarsal bone
The first metatarsal bone is the bone in the body of the foot just behind the big toe.It is remarkable for its great thickness, and is the shortest of the metatarsal bones.The body is strong, and of well-marked prismoid form....
, second
Second metatarsal bone
The second metatarsal bone is the longest of the metatarsal bones, being prolonged backward into the recess formed by the three cuneiform bones.Its base is broad above, narrow and rough below....
, third
Third metatarsal bone
The third metatarsal bone articulates proximally, by means of a triangular smooth surface, with the third cuneiform; medially, by two facets, with the second metatarsal; and laterally, by a single facet, with the fourth metatarsal....
, fourth
Fourth metatarsal bone
The fourth metatarsal bone is smaller in size than the third; its base presents an oblique quadrilateral surface for articulation with the cuboid; a smooth facet on the medial side, divided by a ridge into an anterior portion for articulation with the third metatarsal, and a posterior portion for...
, and fifth metatarsal
Fifth metatarsal bone
The fifth metatarsal bone is recognized by a rough eminence, the tuberosity, on the lateral side of its base.The base articulates behind, by a triangular surface cut obliquely in a transverse direction, with the cuboid; and medially, with the fourth metatarsal.On the medial part of its dorsal...
. The metatarsals are analogous to the metacarpal bones of the hand
Hand
A hand is a prehensile, multi-fingered extremity located at the end of an arm or forelimb of primates such as humans, chimpanzees, monkeys, and lemurs...
.

The five metatarsals are dorsally convex long bones that are located in the fingers and/or the toes consisting of a shaft or body, a base, and a head.
The body is prismoid in form, tapers gradually from the tarsal
Tarsus (skeleton)
In tetrapods, the tarsus is a cluster of articulating bones in each foot situated between the lower end of tibia and fibula of the lower leg and the metatarsus. In the foot the tarsus articulates with the bones of the metatarsus, which in turn articulate with the bones of the individual toes...
to the phalangeal
Phalanx bones
In anatomy, phalanx bones are those that form the fingers and toes. In primates such as humans and monkeys, the thumb and big toe have two phalanges, while the other fingers and toes consist of three. Phalanges are classified as long bones.The phalanges do not have individual names...
extremity, and is curved longitudinally, so as to be concave below, slightly convex above. The base or posterior extremity is wedge
Wedge
Wedge may refer to:Mathematics:* Triangular prism, a parallel triangle wedge* Wedge , a polyhedral solid defined by two triangles and three trapezoid faces* Wedge product, a mathematical term, named for the ∧ operator symbol used...
-shaped, articulating proximally with the tarsal bones, and by its sides with the contiguous metatarsal bones: its dorsal
Dorsum (biology)
In anatomy, the dorsum is the upper side of animals that typically run, fly, or swim in a horizontal position, and the back side of animals that walk upright. In vertebrates the dorsum contains the backbone. The term dorsal refers to anatomical structures that are either situated toward or grow...
and plantar surfaces are rough for the attachment of ligament
Ligament
In anatomy, the term ligament is used to denote any of three types of structures. Most commonly, it refers to fibrous tissue that connects bones to other bones and is also known as articular ligament, articular larua, fibrous ligament, or true ligament.Ligament can also refer to:* Peritoneal...
s. The head or anterior extremity presents a convex articular surface, oblong from above downward, and extending farther backward below than above. Its sides are flattened, and on each is a depression, surmounted by a tubercle, for ligamentous attachment. Its plantar surface is grooved antero-posteriorly for the passage of the flexor tendon
Tendon
A tendon is a tough band of fibrous connective tissue that usually connects muscle to bone and is capable of withstanding tension. Tendons are similar to ligaments and fasciae as they are all made of collagen except that ligaments join one bone to another bone, and fasciae connect muscles to other...
s, and marked on either side by an articular eminence continuous with the terminal articular surface. 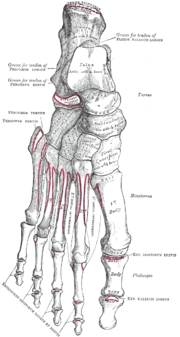 The metatarsal bones are often broken by football players. These and other recent cases have been attributed to the modern lightweight design of football boot
Football boot
Football boots, called cleats or soccer shoes in North America, are an item of footwear worn when playing association football. Those designed for grass pitches have studs on the bottom to aid grip...
s, which give less protection to the foot. In 2010 some footballers began trialling a new sock that incorporated a rubber silicon pad over the foot to provide protection to the top of the foot.

The metatarsal bone injury gained notoriety with soccer fans when the then Deportivo La Coruña
Deportivo de La Coruña
Real Club Deportivo de La Coruña is a professional football club based in the city of A Coruña, Galicia; founded in 1906 and currently playing in Segunda División...
midfielder Aldo Duscher
Aldo Duscher
Álvaro 'Aldo' Pedro Duscher is an Argentine footballer who plays for Barcelona Sporting Club in Ecuador, as a defensive midfielder....
made a strong tackle on David Beckham
David Beckham
David Robert Joseph Beckham, OBE is an English footballer who plays midfield for Los Angeles Galaxy in Major League Soccer, having previously played for Manchester United, Preston North End, Real Madrid, and A.C...
breaking his second metatarsal bone and his participation in the 2002 World Cup
2002 FIFA World Cup
The 2002 FIFA World Cup was the 17th staging of the FIFA World Cup, held in South Korea and Japan from 31 May to 30 June. It was also the first World Cup held in Asia, and the last in which the golden goal rule was implemented. Brazil won the tournament for a record fifth time, beating Germany 2–0...
became doubtful. Beckham eventually made it to the England 2002 World Cup squad. Since then, Wayne Rooney
Wayne Rooney
Wayne Mark Rooney is an English footballer who plays as a striker for Premier League club Manchester United and the England national team...
, Steven Gerrard
Steven Gerrard
Steven George Gerrard MBE is an English footballer who plays for and captains Premier League club Liverpool. He also has 89 caps for the England national team. He has played much of his career in a centre midfielder role, but he has also been used as a second striker and right winger...
, Roy Keane
Roy Keane
Roy Maurice Keane is an Irish former footballer and manager. In his 18-year playing career, he played for Cobh Ramblers in the League of Ireland, Nottingham Forest and Manchester United, before ending his career at Celtic in Scotland....
, Xabi Alonso
Xabi Alonso
Xabier "Xabi" Alonso Olano is a Spanish World Cup-winning footballer who plays for Real Madrid as a midfielder.Alonso began his career at Real Sociedad, the main team of his home region Gipuzkoa. After a brief loan period at Eibar he returned to Sociedad where then manager John Toshack appointed...
and Michael Owen
Michael Owen
Michael James Owen is an English professional footballer who plays as a striker for Manchester United.The son of former footballer Terry Owen, Owen began his senior career at Liverpool in 1996. He progressed through the Liverpool youth team and scored on his debut in May 1997...
have gone down the same road alongside many others.

Stress fractures are thought to account for 16% of injuries related to sports preparation, and the metatarsals are most often involved. These fractures are commonly called march fractures, as they were commonly diagnosed among military recruits after long marches. The second and third metatarsals are fixed while walking, thus these metatarsals are common sites of injury. The fifth metatarsal may be fractured if the foot is oversupinated
Supination
Supination is a position of either the forearm or foot; in the forearm when the palm faces anteriorly, or faces up . Supination in the foot occurs when a person appears "bow-legged" with their weight supported primarily on the anterior of their feet.The hand is supine in the anatomical position...
during locomotion.