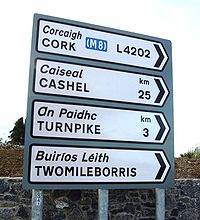 Until 1977, roads in Ireland were designated with one of two prefixes: "T" for Trunk Roads and "L" for Link Roads
Trunk Roads in Ireland
Ireland has an extensive network of public roads which connect all parts of the country with each other. Roads in Ireland are currently classified as motorways, National Primary routes, National secondary routes, Regional roads and Local roads. The introduction of this classification system began...
. Older signs showing the former Trunk and Link road designations are still to be seen in some locations. The L (for Link Road) prefix on these signs is not connected to the existing network of Local Roads.

All other public roads, except motorways
Motorways in the Republic of Ireland
In Ireland, the highest category of road is a Motorway , indicated by the prefix M followed by one or two digits...
, became Local Roads under the 1993 Act which states that "a public road, other than a national road or a regional road, shall be a local road".

Local roads vary greatly in quality, from wide urban streets to very narrow, rural lanes, known as boreen
Boreen
Boreen or bohereen is an anglicised, Hiberno-English term normally meaning a narrow, frequently unpaved, rural road in Ireland. "Boreen" also appears sometimes in names of minor urban roads such as Saint Mobhi Bóithrín , commonly known as Mobhi Boreen in Glasnevin, Dublin....
s in Ireland. There are three types of Local Road: Local Primary (local roads wider than 4 metres), Local Secondary (local roads narrower than 4 metres) and Local Tertiary (cul-de-sac
Cul-de-sac
A cul-de-sac is a word of French origin referring to a dead end, close, no through road or court meaning dead-end street with only one inlet/outlet...
s and other minor roads). Local Roads are subject to a general speed limit
Road speed limits in the Republic of Ireland
Road speed limits in the Republic of Ireland apply on all public roads in the country. These are signposted and legislated for in kilometres per hour. Speed limits are demarcated by regulatory road signs . These consist of white circular signs with a red outline. Speed limits are marked in black...
of 80 km/h (imperial equivalent: 50 mph) or 50 km/h (imperial equivalent: 31.25 mph) in built-up areas. 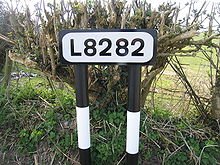 The Roads Act 1993 gives local authorities the duty to "assign a number or other identifying mark to each local road in respect of which it has responsibility". Local Road numbers have been used for administrative purposes since the Act came into effect, but Local Road numbers did not generally appear on directional signposts
Road signs in the Republic of Ireland
Road signs in Ireland mostly differ from the traffic signs used elsewhere in Europe. Directional signage is similar to that of the United Kingdom, but is bilingual. Distances are in kilometres. Apart from directional signage, the basic prohibitory signs such as "no left turn" and "no right turn"...
until the late 2000s. Most road-maps do not show Local Road numbers, although some are marked on OpenStreetMap
OpenStreetMap
OpenStreetMap is a collaborative project to create a free editable map of the world. Two major driving forces behind the establishment and growth of OSM have been restrictions on use or availability of map information across much of the world and the advent of inexpensive portable GPS devices.The...
.

Unlike National and Regional Roads in Ireland, Local Road numbers are not unique. For example, there is an L1001 in Inch, Co Wexford, another L1001 in Limerick and a third in Longford. There are various unrelated roads numbered L1002 across Wexford, Kildare and Meath.