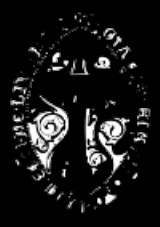 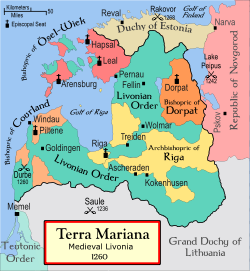 The Livonian Brothers of the Sword were a military order
Military order
A military order is a Christian society of knights that was founded for crusading, i.e. propagating or defending the faith , either in the Holy Land or against Islam or pagans in Europe...
founded by Bishop
Bishop
A bishop is an ordained or consecrated member of the Christian clergy who is generally entrusted with a position of authority and oversight. Within the Catholic Church, Eastern Orthodox, Oriental Orthodox Churches, in the Assyrian Church of the East, in the Independent Catholic Churches, and in the...
Albert of Riga in 1202. Pope Innocent III
Pope Innocent III
Pope Innocent III was Pope from 8 January 1198 until his death. His birth name was Lotario dei Conti di Segni, sometimes anglicised to Lothar of Segni....
sanctioned the establishment in 1204. The membership of the order comprised German
Germans
The Germans are a Germanic ethnic group native to Central Europe. The English term Germans has referred to the German-speaking population of the Holy Roman Empire since the Late Middle Ages....
"warrior monk
Monk
A monk is a person who practices religious asceticism, living either alone or with any number of monks, while always maintaining some degree of physical separation from those not sharing the same purpose...
s". Alternative names of the Order include the Christ Knights, Sword Brethren, and The Militia of Christ of Livonia. 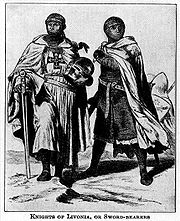 Albert, Bishop of Riga
Riga
Riga is the capital and largest city of Latvia. With 702,891 inhabitants Riga is the largest city of the Baltic states, one of the largest cities in Northern Europe and home to more than one third of Latvia's population. The city is an important seaport and a major industrial, commercial,...
(or Prince-Bishop
Prince-Bishop
A Prince-Bishop is a bishop who is a territorial Prince of the Church on account of one or more secular principalities, usually pre-existent titles of nobility held concurrently with their inherent clerical office...
of Livonia
Livonia
Livonia is a historic region along the eastern shores of the Baltic Sea. It was once the land of the Finnic Livonians inhabiting the principal ancient Livonian County Metsepole with its center at Turaida...
), founded the Brotherhood in 1202 to aid the Bishopric of Livonia in the conversion of the pagan
Paganism
Paganism is a blanket term, typically used to refer to non-Abrahamic, indigenous polytheistic religious traditions....
Livonians
Livonian people
The Livonians or Livs are the indigenous inhabitants of Livonia, a large part of what is today northwestern Latvia and southwestern Estonia. They spoke the Uralic Livonian language, a language which is closely related to Estonian and Finnish...
, Latgalians
Latgalians
The term Latgalians The term Latgalians The term Latgalians (Latgalian: latgalīši, latgali, (also spelt Latgallians and sometimes known as Lettigalls, Latgolans, or Lettigallians) can refer to the inhabitants of the Latgale region in eastern Latvia in general, the ethnic Latvians of Latgale...
and Selonians
Selonians
Selonians were a tribe of Baltic peoples. The Selonians lived until the 15th century in Selonia, located in southeastern Latvia and northeastern Lithuania. They merged with neighbouring tribes, contributing to the ethnogenesis of Latvians and Lithuanians....
living across the ancient trade routes from the Gulf of Riga
Gulf of Riga
The Gulf of Riga, or Bay of Riga, is a bay of the Baltic Sea between Latvia and Estonia. According to C.Michael Hogan, a saline stratification layer is found at a depth of approximately seventy metres....
eastwards. From its foundation, the undisciplined Order tended to ignore its supposed vassal
Vassal
A vassal or feudatory is a person who has entered into a mutual obligation to a lord or monarch in the context of the feudal system in medieval Europe. The obligations often included military support and mutual protection, in exchange for certain privileges, usually including the grant of land held...
age to the bishops. In 1218 Albert asked King Valdemar II
Valdemar II of Denmark
Valdemar II , called Valdemar the Victorious or Valdemar the Conqueror , was the King of Denmark from 1202 until his death in 1241. The nickname Sejr is a later invention and was not used during the King's own lifetime...
of Denmark
Denmark
Denmark is a Scandinavian country in Northern Europe. The countries of Denmark and Greenland, as well as the Faroe Islands, constitute the Kingdom of Denmark . It is the southernmost of the Nordic countries, southwest of Sweden and south of Norway, and bordered to the south by Germany. Denmark...
for assistance, but Valdemar instead arranged a deal with the Brotherhood and conquered the northern Estonia
Danish Estonia
Danish Estonia refers to the territories of present-day Estonia that were ruled by Denmark firstly during the 13th–14th centuries and again in the 16th–17th centuries....
(now known as Danish Estonia) for Denmark.

The Brotherhood had its headquarters at Fellin (Viljandi)
Viljandi
Viljandi is a town and municipality in southern Estonia with a population of 19,150 . It is the capital of Viljandi County. The town was first mentioned in 1283, upon being granted its town charter by Wilhelm von Endorpe....
in present-day Estonia
Estonia
Estonia , officially the Republic of Estonia , is a state in the Baltic region of Northern Europe. It is bordered to the north by the Gulf of Finland, to the west by the Baltic Sea, to the south by Latvia , and to the east by Lake Peipsi and the Russian Federation . Across the Baltic Sea lies...
, where the walls of the Master's castle stand. Other strongholds included Wenden (Cēsis)
Cesis
Cēsis , is a town in Latvia located in the northern part of the Central Vidzeme Upland. Cēsis is on the Gauja River valley, and is built on a series of ridges above the river overlooking the woods below...
, Segewold (Sigulda)
Sigulda
Other twinnings: Keila, Estonia chiatura Georgia-References:* , , , , , and -External links:*...
and Ascheraden (Aizkraukle)
Aizkraukle
Aizkraukle is a town in Vidzeme region in Latvia, the administrative centre of Aizkraukle municipality on the right bank of the Daugava River.-History:Aizkraukle before the World War I was formerly known by its German name of Ascheraden...
. The commanders of Fellin, Goldingen (Kuldīga)
Kuldiga
Kuldīga is a town in western Latvia. It is the center of Kuldīga municipality with a population of approximately 13,500.Kuldīga was first mentioned in 1242. It joined the Hanseatic League in 1368...
, Marienburg (Alūksne)
Aluksne
Alūksne is a town on the shores of Lake Alūksne in northeastern Latvia near the borders with Estonia and Russia. It is the seat of Alūksne municipality.- History :...
, Reval (Tallinn)
Tallinn
Tallinn is the capital and largest city of Estonia. It occupies an area of with a population of 414,940. It is situated on the northern coast of the country, on the banks of the Gulf of Finland, south of Helsinki, east of Stockholm and west of Saint Petersburg. Tallinn's Old Town is in the list...
, and the bailiff
Bailiff
A bailiff is a governor or custodian ; a legal officer to whom some degree of authority, care or jurisdiction is committed...
of Weißenstein (Paide)
Paide
Paide is the capital of Järva County, Estonia.A castle built by the Livonian Brothers of the Sword is located here. The town was formally founded 30 September 1291 by Halt, master of the Livonian Order....
belonged to the five-member entourage of the Order's Master.

Pope Gregory IX
Pope Gregory IX
Pope Gregory IX, born Ugolino di Conti, was pope from March 19, 1227 to August 22, 1241.The successor of Pope Honorius III , he fully inherited the traditions of Pope Gregory VII and of his uncle Pope Innocent III , and zealously continued their policy of Papal supremacy.-Early life:Ugolino was...
asked the Brothers to defend Finland
Finland
Finland , officially the Republic of Finland, is a Nordic country situated in the Fennoscandian region of Northern Europe. It is bordered by Sweden in the west, Norway in the north and Russia in the east, while Estonia lies to its south across the Gulf of Finland.Around 5.4 million people reside...
from the Novgorodian attacks
Finnish-Novgorodian wars
The Finnish–Novgorodian wars were a series of conflicts that took place between Finnic tribes in eastern Fennoscandia called "Yem", and the Republic of Novgorod from the 11th or 12th century to early 13th century. The wars seem to have contributed to the eventual Swedish conquest of Finland in...
in his letter of November 24, 1232.
However, no known information regarding the knights' possible activities in Finland has survived. (Sweden
Sweden
Sweden , officially the Kingdom of Sweden , is a Nordic country on the Scandinavian Peninsula in Northern Europe. Sweden borders with Norway and Finland and is connected to Denmark by a bridge-tunnel across the Öresund....
eventually conquered Finland following the Second Swedish Crusade
Second Swedish Crusade
The Second Swedish Crusade was a Swedish military expedition to areas in present-day Finland by Birger jarl in the 13th century. As a result of the crusade, Finland became permanently part of Sweden for the next 550 years.-Year of the crusade:...
in 1249.)

The Order was decimated in the Battle of Schaulen (Saule) in 1236 against Lithuanians
Lithuanians
Lithuanians are the Baltic ethnic group native to Lithuania, where they number around 2,765,600 people. Another million or more make up the Lithuanian diaspora, largely found in countries such as the United States, Brazil, Canada, Colombia, Russia, United Kingdom and Ireland. Their native language...
and Semigallians
Semigallians
Semigallians were the Baltic tribe that lived in the southcentral part of contemporary Latvia and northern Lithuania...
. This disaster led the surviving Brothers to become incorporated into the Order of Teutonic Knights
Teutonic Knights
The Order of Brothers of the German House of Saint Mary in Jerusalem , commonly the Teutonic Order , is a German medieval military order, in modern times a purely religious Catholic order...
in the following year, and from that point on they became known as the Livonian Order
Livonian Order
The Livonian Order was an autonomous Livonian branch of the Teutonic Order and a member of the Livonian Confederation from 1435–1561. After being defeated by Samogitians in the 1236 Battle of Schaulen , the remnants of the Livonian Brothers of the Sword were incorporated into the Teutonic Knights...
. They continued, however, to function in all respects (rule, clothing and policy) as an autonomous branch of the Teutonic Order, headed by their own Master (himself de jure subject to the Teutonic Order's Grand Master
Hochmeister
The grand master is the holder of the supreme office of the Teutonic Order. It is equivalent to the grand master of other military orders and the superior general in non-military Roman Catholic religious orders...
).