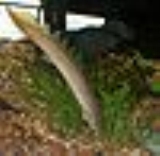 Encyclopedia
A vast number of species of fish
Fish
Fish are a paraphyletic group of organisms that consist of all gill-bearing aquatic vertebrate animals that lack limbs with digits. Included in this definition are the living hagfish, lampreys, and cartilaginous and bony fish, as well as various extinct related groups...
have been successfully kept in the home freshwater
Freshwater
Fresh water is naturally occurring water on the Earth's surface in ice sheets, ice caps, glaciers, bogs, ponds, lakes, rivers and streams, and underground as groundwater in aquifers and underground streams. Fresh water is generally characterized by having low concentrations of dissolved salts and...
aquarium
Aquarium
An aquarium is a vivarium consisting of at least one transparent side in which water-dwelling plants or animals are kept. Fishkeepers use aquaria to keep fish, invertebrates, amphibians, marine mammals, turtles, and aquatic plants...
. This list gives only some of the most commonly kept species.


Characins
Characidae
The Characidae, characids or characins are a family of freshwater subtropical and tropical fish, belonging to the order Characiformes. The name "characins" is the historical one, but scientists today tend to prefer "characids" to reflect their status as a by and large monophyletic group at family...
and other characiformes
Characiformes
The Characiformes are an order of ray-finned fish, comprising the characins and their allies. Grouped in 18 recognized families, there are a few thousand different species, including the well-known piranha and tetras.-Taxonomy:...


Killifish
Killifish
A killifish is any of various oviparous cyprinodontiform fish . Altogether, there are some 1270 different species of killifish, the biggest family being Rivulidae, containing more than 320 species...

Loaches and related cypriniformes
Cypriniformes
The Cypriniformes are an order of ray-finned fish, including the carps, minnows, loaches and relatives. This order contains 5-6 families, over 320 genera, and more than 3,250 species, with new species being described every few months or so, and new genera being recognized regularly...