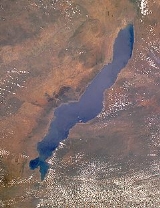 Overview
Lake Malawi is an African Great Lake
African Great Lakes
The African Great Lakes are a series of lakes and the Rift Valley lakes in and around the geographic Great Rift Valley formed by the action of the tectonic East African Rift on the continent of Africa...
and the southernmost lake
Lake
A lake is a body of relatively still fresh or salt water of considerable size, localized in a basin, that is surrounded by land. Lakes are inland and not part of the ocean and therefore are distinct from lagoons, and are larger and deeper than ponds. Lakes can be contrasted with rivers or streams,...
in the Great Rift Valley
Great Rift Valley
The Great Rift Valley is a name given in the late 19th century by British explorer John Walter Gregory to the continuous geographic trench, approximately in length, that runs from northern Syria in Southwest Asia to central Mozambique in South East Africa...
system of East Africa. This lake, the third largest in Africa
Africa
Africa is the world's second largest and second most populous continent, after Asia. At about 30.2 million km² including adjacent islands, it covers 6% of the Earth's total surface area and 20.4% of the total land area...
and the eighth largest lake in the world, is located between Malawi
Malawi
The Republic of Malawi is a landlocked country in southeast Africa that was formerly known as Nyasaland. It is bordered by Zambia to the northwest, Tanzania to the northeast, and Mozambique on the east, south and west. The country is separated from Tanzania and Mozambique by Lake Malawi. Its size...
, Mozambique
Mozambique
Mozambique, officially the Republic of Mozambique , is a country in southeastern Africa bordered by the Indian Ocean to the east, Tanzania to the north, Malawi and Zambia to the northwest, Zimbabwe to the west and Swaziland and South Africa to the southwest...
, and Tanzania
Tanzania
The United Republic of Tanzania is a country in East Africa bordered by Kenya and Uganda to the north, Rwanda, Burundi, and the Democratic Republic of the Congo to the west, and Zambia, Malawi, and Mozambique to the south. The country's eastern borders lie on the Indian Ocean.Tanzania is a state...
. It is the second deepest lake in Africa, although its placid northern shore gives no hint of its depth. This great lake's tropical waters are reportedly the habitat of more species of fish than those of any other body of freshwater on Earth, including more than 1000 species of cichlid
Cichlid
Cichlids are fishes from the family Cichlidae in the order Perciformes. Cichlids are members of a group known as the Labroidei along with the wrasses , damselfish , and surfperches . This family is both large and diverse. At least 1,300 species have been scientifically described, making it one of...
s.

Lake Malawi was officially declared a reserve by the Government of Mozambique on June 10, 2011 in an effort to protect one of the largest and bio-diverse freshwater lakes in the world
Lake Malawi or Lake Nyaza is between 560 and 580 kilometres long, and about 75 kilometres wide at its widest point.

Compare the shape of the lake malawi and the lake tanganyika to that of red sea. find some similarities. explain
More