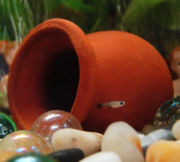 Live-bearing aquarium fish, often simply called livebearers, are fish
Fish
Fish are a paraphyletic group of organisms that consist of all gill-bearing aquatic vertebrate animals that lack limbs with digits. Included in this definition are the living hagfish, lampreys, and cartilaginous and bony fish, as well as various extinct related groups...
that retain the eggs inside the body and give birth to live, free-swimming young.

Species of interest to aquarists are almost always members of the family Poeciliidae
Poeciliidae
Poeciliidae is a family of fresh-water fish which are live-bearing aquarium fish . They belong to the order Cyprinodontiformes, tooth-carps, and include well-known aquarium fish such as the guppy, molly, platy, and swordtail...
, most commonly guppies, mollies, platies, swordtails
Green swordtail
The green swordtail is a species of freshwater fish in family Poeciliidae of order Cyprinodontiformes. A live-bearer, it is closely related to the southern platyfish or "platy" and can crossbreed with it...
, and limias
Limia
Limia is a genus of livebearing freshwater fishes belonging to the cyprinodontiform family Poeciliidae, which includes other livebearers such as platys, swordtails , guppies and mollies...
.

Live-bearing aquarium fish, often simply called livebearers, are fish that retain the eggs inside the body and give birth to live, free-swimming young. Because the newborn fish are large compared to the fry of oviparous fish, they are easier to feed than the fry of egg-laying species such as characins and cichlids. This makes them much easier to raise, and for this reason, aquarists often recommend them for beginners to fish breeding. In addition, being much larger makes them far less vulnerable to predation, and with sufficient cover, they can sometimes mature in a community tank.

Most of the Poeciliidae are ovoviviparous
Ovoviviparity
Ovoviviparity, ovovivipary, or ovivipary, is a mode of reproduction in animals in which embryos develop inside eggs that are retained within the mother's body until they are ready to hatch...
, that is, while the eggs are retained inside the body of the female for protection, the eggs are essentially independent of the mother and she does not provide them with any nutrients. In contrast, fish such as splitfins and halfbeaks are viviparous, with the eggs receiving food from the maternal blood supply through structures analogous to the placenta
Placenta
The placenta is an organ that connects the developing fetus to the uterine wall to allow nutrient uptake, waste elimination, and gas exchange via the mother's blood supply. "True" placentas are a defining characteristic of eutherian or "placental" mammals, but are also found in some snakes and...
of placental mammals.

Seahorses and pipefish
Pipefish
Pipefishes or pipe-fishes are a subfamily of small fishes, which, together with the seahorses, form the family Syngnathidae.-Anatomy:...
can be defined as livebearers, although in these cases the males incubate the eggs rather than the females. In many cases, the eggs are dependent on the male for oxygen and nutrition, so these fish can be further defined as viviparous livebearers.

Many cichlid
Cichlid
Cichlids are fishes from the family Cichlidae in the order Perciformes. Cichlids are members of a group known as the Labroidei along with the wrasses , damselfish , and surfperches . This family is both large and diverse. At least 1,300 species have been scientifically described, making it one of...
s are mouthbrooders, with the female (or more rarely the male) incubating the eggs in the buccal cavity
Mouth
The mouth is the first portion of the alimentary canal that receives food andsaliva. The oral mucosa is the mucous membrane epithelium lining the inside of the mouth....
. Compared with other cichlids, these species produce fewer but bigger eggs, and when they emerge, the fry are better developed and have a higher survivability. Because the eggs are protected from the environment but do not absorb nutrients from the parent, this condition is analogous
Analogy (biology)
An analogy is a trait or an organ that appears similar in two unrelated organisms. The cladistic term for the same phenomenon is homoplasy, from Greek for same form. Biological anologies are often the result of convergent evolution....
to, though not identical
Homology (biology)
Homology forms the basis of organization for comparative biology. In 1843, Richard Owen defined homology as "the same organ in different animals under every variety of form and function". Organs as different as a bat's wing, a seal's flipper, a cat's paw and a human hand have a common underlying...
with, ovoviviparity.