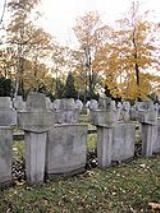 From the Middle Ages
Middle Ages
The Middle Ages is a periodization of European history from the 5th century to the 15th century. The Middle Ages follows the fall of the Western Roman Empire in 476 and precedes the Early Modern Era. It is the middle period of a three-period division of Western history: Classic, Medieval and Modern...
until the Holocaust
The Holocaust
The Holocaust , also known as the Shoah , was the genocide of approximately six million European Jews and millions of others during World War II, a programme of systematic state-sponsored murder by Nazi...
, Jews comprised a significant part of the Polish
Poland
Poland , officially the Republic of Poland , is a country in Central Europe bordered by Germany to the west; the Czech Republic and Slovakia to the south; Ukraine, Belarus and Lithuania to the east; and the Baltic Sea and Kaliningrad Oblast, a Russian exclave, to the north...
population. The Polish-Lithuanian Commonwealth
Polish-Lithuanian Commonwealth
The Polish–Lithuanian Commonwealth was a dualistic state of Poland and Lithuania ruled by a common monarch. It was the largest and one of the most populous countries of 16th- and 17th‑century Europe with some and a multi-ethnic population of 11 million at its peak in the early 17th century...
, known as a "Jewish paradise" for its religious tolerance, attracted numerous Jews who fled persecution from other European countries, even though, at times, discrimination against Jews surfaced as it did elsewhere in Europe. Poland was a major spiritual and cultural center for Ashkenazi Jews/Ashkenazi Jewry. At the start of the Second World War, Poland had the largest Jewish population in the world (over 3.3 million http://www.jewishvirtuallibrary.org/jsource/vjw/Poland.html), the vast majority of whom were killed by the Nazis
Nazism
Nazism, the common short form name of National Socialism was the ideology and practice of the Nazi Party and of Nazi Germany...
in the Holocaust during the German
Germany
Germany , officially the Federal Republic of Germany , is a federal parliamentary republic in Europe. The country consists of 16 states while the capital and largest city is Berlin. Germany covers an area of 357,021 km2 and has a largely temperate seasonal climate...
occupation of Poland, particularly through the implementation of the "Final Solution
Final Solution
The Final Solution was Nazi Germany's plan and execution of the systematic genocide of European Jews during World War II, resulting in the most deadly phase of the Holocaust...
" mass extermination program. Only 369,000 (11%) survived. After massive postwar emigration, the current Polish Jewish population stands at somewhere between 8,000 and 20,000.