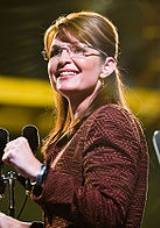 Encyclopedia
The Governor of Alaska is the chief executive
Head of government
Head of government is the chief officer of the executive branch of a government, often presiding over a cabinet. In a parliamentary system, the head of government is often styled prime minister, chief minister, premier, etc...
of the State of Alaska
Alaska
Alaska is the largest state in the United States by area. It is situated in the northwest extremity of the North American continent, with Canada to the east, the Arctic Ocean to the north, and the Pacific Ocean to the west and south, with Russia further west across the Bering Strait...
. The governor
Governor (United States)
In the United States, the title governor refers to the chief executive of each state or insular territory, not directly subordinate to the federal authorities, but the political and ceremonial head of the state.-Role and powers:...
is the commander-in-chief
Commander-in-Chief
A commander-in-chief is the commander of a nation's military forces or significant element of those forces. In the latter case, the force element may be defined as those forces within a particular region or those forces which are associated by function. As a practical term it refers to the military...
of the state's
U.S. state
A U.S. state is any one of the 50 federated states of the United States of America that share sovereignty with the federal government. Because of this shared sovereignty, an American is a citizen both of the federal entity and of his or her state of domicile. Four states use the official title of...
military forces (including the Alaska National Guard
Alaska National Guard
The Alaska Department of Military and Veterans Affairs manages military and veterans affairs for the U.S. state of Alaska. It comprises a number of subdepartments, including the Alaska National Guard, Veterans Affairs, the Division of Homeland Security and Emergency Management, Alaska Naval...
and Alaska State Defense Force
Alaska State Defense Force
The Alaska State Defense Force is the State Defense Force of Alaska. It is one of 23 such forces in the U.S. states.The Alaska State Defense Force is the successor of the Alaska Territorial Guard founded during World War II...
), has a duty to enforce state law
State law
In the United States, state law is the law of each separate U.S. state, as passed by the state legislature and adjudicated by state courts. It exists in parallel, and sometimes in conflict with, United States federal law. These disputes are often resolved by the federal courts.-See also:*List of U.S...
s, and the power to either approve or veto
Veto
A veto, Latin for "I forbid", is the power of an officer of the state to unilaterally stop an official action, especially enactment of a piece of legislation...
bills passed by the Alaska Legislature
Alaska Legislature
The Alaska Legislature is the state legislature of the U.S. state of Alaska. It is a bicameral institution, consisting of the lower Alaska House of Representatives, with 40 members, and the upper house Alaska Senate, with 20 members...
, to convene the legislature, and to grant pardons, except in cases of impeachment.

Nine people have served as governor of the State of Alaska over 11 distinct terms, though Alaska had over 30 civilian and military governors during its long history as a United States territory
United States territory
United States territory is any extent of region under the jurisdiction of the federal government of the United States, including all waters including all U.S. Naval carriers. The United States has traditionally proclaimed the sovereign rights for exploring, exploiting, conserving, and managing its...
. Two people, William Allen Egan
William Allen Egan
William Allen Egan was an American Democratic politician. He served as the first Governor of the State of Alaska from January 3, 1959 to 1966, and the fourth Governor from 1970 to 1974...
and Wally Hickel, have been elected to multiple non-consecutive terms as governor. Hickel is also noted for a rare third party
Third party (United States)
The term third party is used in the United States for any and all political parties in the United States other than one of the two major parties . The term can also refer to independent politicians not affiliated with any party at all and to write-in candidates.The United States has had a...
win in American politics, having been elected to a term in 1990 representing the Alaskan Independence Party
Alaskan Independence Party
The Alaskan Independence Party is a political party in the U.S. state of Alaska that advocates an in-state referendum which includes the option of Alaska becoming an independent country...
. The longest-serving governor of the state was Egan, who was elected three times and served nearly 12 years. The longest-serving territorial governor was Ernest Gruening
Ernest Gruening
Ernest Henry Gruening was an American journalist and Democrat who was the Governor of the Alaska Territory from 1939 until 1953, and a United States Senator from Alaska from 1959 until 1969.-Early life:...
, who served 13½ years.

The current governor is Sean Parnell
Sean Parnell
Sean R. Parnell is an American Republican politician who is the tenth and current Governor of Alaska. He succeeded Sarah Palin following her resignation, and was sworn in at the Governor's Picnic in Fairbanks on July 26, 2009...
, who took office on July 26, 2009, following the resignation
Resignation of Sarah Palin
The resignation of Sarah Palin as Governor of Alaska was announced on July 3, 2009 and became effective on July 26. Sean Parnell, the lieutenant governor, took Palin's place as governor.-Reasons for the resignation:...
of Sarah Palin
Sarah Palin
Sarah Louise Palin is an American politician, commentator and author. As the Republican Party nominee for Vice President in the 2008 presidential election, she was the first Alaskan on the national ticket of a major party and first Republican woman nominated for the vice-presidency.She was...
, and was elected to a full term in 2010.

Alaska was purchased
Alaska purchase
The Alaska Purchase was the acquisition of the Alaska territory by the United States from Russia in 1867 by a treaty ratified by the Senate. The purchase, made at the initiative of United States Secretary of State William H. Seward, gained of new United States territory...
by the United States
United States
The United States of America is a federal constitutional republic comprising fifty states and a federal district...
from Russia
Russia
Russia or , officially known as both Russia and the Russian Federation , is a country in northern Eurasia. It is a federal semi-presidential republic, comprising 83 federal subjects...
in 1867, with formal transfer occurring on October 18, 1867, which is now celebrated as Alaska Day
Alaska Day
Alaska Day is a legal holiday in the U.S. state of Alaska, observed on October 18. It is the anniversary of the formal transfer of the Territory of Alaska from Russia to the United States which took place at a flag-raising ceremony at Fort Sitka on Friday October 18, 1867 Alaska Day is a legal...
. Prior to then, it was known as Russian America or Russian Alaska, controlled by the governors and general managers of the Russian-American Company
Russian-American Company
The Russian-American Company was a state-sponsored chartered company formed largely on the basis of the so-called Shelekhov-Golikov Company of Grigory Shelekhov and Ivan Larionovich Golikov The Russian-American Company (officially: Under His Imperial Majesty's Highest Protection (patronage)...
.


Commanders of the Department of Alaska

Some believe the first American administrator of Alaska was Polish
Poles
thumb|right|180px|The state flag of [[Poland]] as used by Polish government and diplomatic authoritiesThe Polish people, or Poles , are a nation indigenous to Poland. They are united by the Polish language, which belongs to the historical Lechitic subgroup of West Slavic languages of Central Europe...
immigrant Włodzimierz Krzyżanowski. However, the Anchorage Daily News
Anchorage Daily News
The Anchorage Daily News is a daily newspaper based in Anchorage, Alaska, in the United States. It is often referred to colloquially as either "the Daily News" or "the ADN"...
was unable to find any conclusive information to support this claim.

Governors of the District of Alaska

Governors of the Territory of Alaska

The District of Alaska was organized into Alaska Territory
Alaska Territory
The Territory of Alaska was an organized incorporated territory of the United States that existed from August 24, 1912, until January 3, 1959, when it was admitted to the Union as the State of Alaska...
on August 24, 1912. Governors continued to be appointed by the President of the United States. During World War II
World War II
World War II, or the Second World War , was a global conflict lasting from 1939 to 1945, involving most of the world's nations—including all of the great powers—eventually forming two opposing military alliances: the Allies and the Axis...
, parts of the Aleutian Islands were occupied by Imperial Japan from June 5, 1942, to June 28, 1943.

Governors of the State of Alaska

The state constitution provides for the election of a governor and lieutenant governor every four years on the same ticket
Ticket (election)
A ticket refers to a single election choice which fills more than one political office or seat. For example, in the U.S., the candidates for President and Vice President run on the same "ticket", because they are elected together on a single ballot question rather than separately.A ticket can also...
, with their terms commencing on the first Monday in the December following the election. Governors are allowed to succeed themselves once, having to wait four years after their second term in a row before being allowed to run again. Should the office of governor become vacant, the lieutenant governor assumes the title of governor. The original constitution of 1956 created the office of secretary of state, which was functionally identical to a lieutenant governor, and was renamed to "lieutenant governor" in 1970.

There have been six governors from the Republican Party
Republican Party (United States)
The Republican Party is one of the two major contemporary political parties in the United States, along with the Democratic Party. Founded by anti-slavery expansion activists in 1854, it is often called the GOP . The party's platform generally reflects American conservatism in the U.S...
, five from the Democratic
Democratic Party (United States)
The Democratic Party is one of two major contemporary political parties in the United States, along with the Republican Party. The party's socially liberal and progressive platform is largely considered center-left in the U.S. political spectrum. The party has the lengthiest record of continuous...
Party, and one, Wally Hickel, who was elected under the Alaskan Independence Party
Alaskan Independence Party
The Alaskan Independence Party is a political party in the U.S. state of Alaska that advocates an in-state referendum which includes the option of Alaska becoming an independent country...
during his second period in office. Many Republicans were unhappy with the choice of Arliss Sturgulewski as their party's candidate for governor in the 1990 election, and Hickel was able to attract their votes. However, he never held the AIP's secessionist ideals, and switched back to the Republican Party eight months before his term ended.

, seven former governors were alive, including Mike Stepovich, the last living pre-statehood governor in the United States. The most recent death of a former governor was that of Wally Hickel (1966–1969, 1990–1994), who died on May 7, 2010.