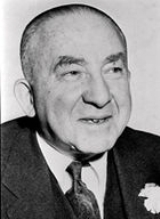 Born in New York City, Gruening graduated from Harvard University
Harvard University
Harvard University is a private Ivy League university located in Cambridge, Massachusetts, United States, established in 1636 by the Massachusetts legislature. Harvard is the oldest institution of higher learning in the United States and the first corporation chartered in the country...
in 1907 and from Harvard Medical School
Harvard Medical School
Harvard Medical School is the graduate medical school of Harvard University. It is located in the Longwood Medical Area of the Mission Hill neighborhood of Boston, Massachusetts....
in 1912. He then forsook medicine to pursue journalism. Initially a reporter for the Boston American in 1912, he went on to become copy desk editor and rewrite man for the Boston Evening Herald
Boston Herald
The Boston Herald is a daily newspaper that serves Boston, Massachusetts, United States, and its surrounding area. It was started in 1846 and is one of the oldest daily newspapers in the United States...
and, from 1912 to 1913, an editorial writer. For four years, Gruening was, consecutively, managing editor of the Boston Evening Traveler and the New York Tribune
New York Tribune
The New York Tribune was an American newspaper, first established by Horace Greeley in 1841, which was long considered one of the leading newspapers in the United States...
. After serving in World War I, Gruening became the editor of The Nation from 1920 to 1923 and the editor of the New York Post
New York Post
The New York Post is the 13th-oldest newspaper published in the United States and is generally acknowledged as the oldest to have been published continuously as a daily, although – as is the case with most other papers – its publication has been periodically interrupted by labor actions...
for four months in 1934.

Gruening’s most notable act as Senator was being, along with Wayne Morse
Wayne Morse
Wayne Lyman Morse was a politician and attorney from Oregon, United States, known for his proclivity for opposing his parties' leadership, and specifically for his opposition to the Vietnam War on constitutional grounds....
of Oregon
Oregon
Oregon is a state in the Pacific Northwest region of the United States. It is located on the Pacific coast, with Washington to the north, California to the south, Nevada on the southeast and Idaho to the east. The Columbia and Snake rivers delineate much of Oregon's northern and eastern...
, one of only two Senators to vote against the Gulf of Tonkin Resolution
Gulf of Tonkin Resolution
The Tonkin Gulf Resolution was a joint resolution which the United States Congress passed on August 10, 1964 in response to a sea battle between the North Vietnamese Navy's Torpedo Squadron 10135 and the destroyer on August 2 and an alleged second naval engagement between North Vietnamese boats...
, which authorized an expansion of U.S. involvement in the Vietnam War. He was also responsible for introducing a sense of Congress resolution to establish the nationwide 911
9-1-1
9-1-1 is the emergency telephone number for the North American Numbering Plan .It is one of eight N11 codes.The use of this number is for emergency circumstances only, and to use it for any other purpose can be a crime.-History:In the earliest days of telephone technology, prior to the...
number.

Gruening was defeated for re-election in 1968 by fellow Democrat Mike Gravel
Mike Gravel
Maurice Robert "Mike" Gravel is a former Democratic United States Senator from Alaska, who served two terms from 1969 to 1981, and a former candidate in the 2008 presidential election....
. Gravel defeated Gruening in the Democratic primary
Primary election
A primary election is an election in which party members or voters select candidates for a subsequent election. Primary elections are one means by which a political party nominates candidates for the next general election....
, but Gruening ran in the general election as an independent, taking third place, behind Gravel and Republican former Anchorage
Anchorage, Alaska
Anchorage is a unified home rule municipality in the southcentral part of the U.S. state of Alaska. It is the northernmost major city in the United States...
Mayor Elmer E. Rasmuson
Elmer E. Rasmuson
Elmer E. Rasmuson was an Alaskan banker and philanthropist. He was Mayor of Anchorage from 1964 to 1967.-Origins and education:...
. He continued his active political involvement as president of an investment firm and as a legislative consultant. He died on June 26, 1974.

In 1980, Gruening's grandson, Clark Gruening
Clark Gruening
Clark S. Gruening is an attorney and Democratic Party politician from the U.S. state of Alaska. He is chiefly known as the second of three persons to defeat the incumbent holder of Alaska's Class 3 United States Senate seat in the primary election.Clark Gruening was born in San Francisco,...
, defeated Gravel in the Democratic primary for renomination to the U.S. Senate. Another grandson, Winthrop H. "Win" Gruening, is best known as a senior vice president of KeyBank in Juneau, Alaska
Juneau, Alaska
The City and Borough of Juneau is a unified municipality located on the Gastineau Channel in the panhandle of the U.S. state of Alaska. It has been the capital of Alaska since 1906, when the government of the then-District of Alaska was moved from Sitka as dictated by the U.S. Congress in 1900...
and longtime head of The Alaska Committee, which was organized in 1995 to advocate for keeping Alaska's capital in Juneau.