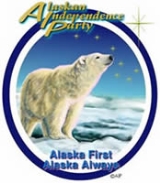 Encyclopedia
The Alaskan Independence Party is a political party
Political party
A political party is a political organization that typically seeks to influence government policy, usually by nominating their own candidates and trying to seat them in political office. Parties participate in electoral campaigns, educational outreach or protest actions...
in the U.S. state
U.S. state
A U.S. state is any one of the 50 federated states of the United States of America that share sovereignty with the federal government. Because of this shared sovereignty, an American is a citizen both of the federal entity and of his or her state of domicile. Four states use the official title of...
of Alaska
Alaska
Alaska is the largest state in the United States by area. It is situated in the northwest extremity of the North American continent, with Canada to the east, the Arctic Ocean to the north, and the Pacific Ocean to the west and south, with Russia further west across the Bering Strait...
that advocates an in-state referendum which includes the option of Alaska becoming an independent country. The party also advocates positions similar to those of the Constitution Party
Constitution Party (United States)
The Constitution Party is a paleoconservative political party in the United States. It was founded as the U.S. Taxpayers' Party by Howard Philips in 1991. Phillips was the party's candidate in the 1992, 1996 and 2000 presidential elections...
and Libertarian Party
Libertarian Party (United States)
The Libertarian Party is the third largest and fastest growing political party in the United States. The political platform of the Libertarian Party reflects its brand of libertarianism, favoring minimally regulated, laissez-faire markets, strong civil liberties, minimally regulated migration...
, supporting gun rights, privatization
Privatization
Privatization is the incidence or process of transferring ownership of a business, enterprise, agency or public service from the public sector to the private sector or to private non-profit organizations...
, home schooling, and limited government
Limited government
Limited government is a government which anything more than minimal governmental intervention in personal liberties and the economy is generally disallowed by law, usually in a written constitution. It is written in the United States Constitution in Article 1, Section 8...
.

The national Constitution Party lists the AIP as an Alaska affiliate.


The call for this vote is in furtherance of the dream of the Alaskan Independence Party's founding father, Joe Vogler
Joe Vogler
Joseph E. "Joe" Vogler was the founder of the Alaskan Independence Party, and either its chair or gubernatorial nominee for most of its first two decades of existence...
, which was for Alaskans to achieve independence under a minimal government, fully responsive to the people, promoting a peaceful and lawful means of resolving differences."

Since its founding, the AIP has radically changed with respect to the issue of secession. At present, it does not support secession, though, at its founding, it did. In 1973 Joe Vogler
Joe Vogler
Joseph E. "Joe" Vogler was the founder of the Alaskan Independence Party, and either its chair or gubernatorial nominee for most of its first two decades of existence...
began arguing about the validity of the Alaskan statehood vote. Early in that year, he began circulating a petition seeking support for secession
Secession
Secession is the act of withdrawing from an organization, union, or especially a political entity. Threats of secession also can be a strategy for achieving more limited goals.-Secession theory:...
of Alaska from the United States
United States
The United States of America is a federal constitutional republic comprising fifty states and a federal district...
. Alaska magazine published a piece at that time in which Vogler claimed to have gathered 15,000 signatures in 3 weeks.

Vogler has been quoted as stating "I'm an Alaskan, not an American. I've got no use for America or her damned institutions."

In early 1973, Vogler founded Alaskans For Independence, originally to label the petition drive, but which took on a life of its own in the following years. The organization actively pursued secession for Alaska from the United States
United States
The United States of America is a federal constitutional republic comprising fifty states and a federal district...
. He also founded the Alaskan Independence Party at around the same time, which for its first decade was used exclusively by Vogler for his first two campaigns for governor and campaign for lieutenant governor (with Don Wright
Don Wright (politician)
Donald Rose "Don" Wright is an American politician and former president of the Alaska Federation of Natives, serving from 1970 to 1972 during the height of activity over passage of the Alaska Native Claims Settlement Act. Most of his notoriety in Alaskan politics has come as a perennial candidate...
as his running mate). Largely in response to the lawsuit Vogler v. Miller
Terry Miller (politician)
Terry Miller was the sixth Lieutenant Governor of Alaska, 1978–1982.Miller was born in San Francisco, California. His father, Conrad B. Miller, came to Fairbanks, Alaska in 1949 and soon began work as a fur trader in rural Alaska...
, the State of Alaska enacted emergency regulations, effective June 14, 1984, which gave official recognition to the party in Alaska. The party has maintained its recognized status since, first by maintaining thresholds in gubernatorial elections, then through same with voter registration. The AIP, while a home to many secession-minded people, has from the start sought to explore whether the 1958 vote by Alaskans authorizing statehood was legal, as outlined in the excerpt from the party's charter found above.

Vogler would serve as the AIP's standard-bearer for most of the party's first two decades. He ran for governor in 1974, with Wayne Peppler as his running mate. Jay Hammond
Jay Hammond
Jay Sterner Hammond was an American politician of the Republican Party, who served as the fourth Governor of Alaska from 1974 to 1982.-Early life:...
was elected over incumbent governor William Egan
William Allen Egan
William Allen Egan was an American Democratic politician. He served as the first Governor of the State of Alaska from January 3, 1959 to 1966, and the fourth Governor from 1970 to 1974...
, with Vogler trailing far behind. Typical political discussion of the day contended that Vogler was a "spoiler," and that the result would have been different had he not been in the race.

Vogler's running mate in 1986 was Al Rowe, a Fairbanks resident and former Alaska State Trooper
Alaska State Troopers
The Division of Alaska State Troopers is the state police agency of Alaska. It is a division of the Alaska Department of Public Safety . The Alaska State Troopers are a full service law enforcement agency and handle both traffic and criminal law enforcement...
. Rowe took out a series of newspaper ads, fashioning himself in the image of Sheriff Buford Pusser. These ads were a major attention getter during the race. Between Rowe's ads and the turmoil existing in the Republican Party
Republican Party (United States)
The Republican Party is one of the two major contemporary political parties in the United States, along with the Democratic Party. Founded by anti-slavery expansion activists in 1854, it is often called the GOP . The party's platform generally reflects American conservatism in the U.S...
over the nomination of Arliss Sturgulewski
Arliss Sturgulewski
Jane Arliss Sturgulewski is a retired businesswoman and Republican politician from the U.S. state of Alaska. In a political career in which she started appearing in the spotlight in 1975, she represented Anchorage in the Alaska Senate from 1979 to 1993...
, the AIP gained 5.2 percent of the vote, becoming a recognized party in Alaska for the first time.

Since then, AIP candidates have disapproved of initiating a state-wide vote revisiting the status of Alaskan statehood. In 1990, former Republican governor Walter Joseph Hickel
Walter Joseph Hickel
Walter Joseph "Wally" Hickel was an industrialist, focused mostly on construction and real estate development, and a politician of the Republican and Alaskan Independence parties from the U.S. state of Alaska. Hickel served as the second and eighth Governor of Alaska...
, won the election for governor as a member of the Alaskan Independence Party, along with Jack Coghill as his running mate. This was the only time since Alaska joined the union that a third-party candidate has been elected governor. Hickel refused a vote on secession called on by a fringe group within the AIP loyal to Vogler's original vision. He rejoined the Republican Party in 1994, with eight months remaining in his term.

Carl E. Moses
Carl E. Moses
Carl E. Moses is a businessman from Unalaska, Alaska who served in the Alaska House of Representatives from 1965 to 1973 as both a Republican and Democrat, and was elected again to the House in 1992 running on the Alaskan Independence Party ticket, later switched back to the Democrats, and served...
, a businessman from Unalaska
Unalaska, Alaska
Unalaska is a city in the Aleutians West Census Area of the Unorganized Borough of the U.S. state of Alaska. Unalaska is located on Unalaska Island and neighboring Amaknak Island in the Aleutian Islands off of mainland Alaska....
who had served in the Alaska House of Representatives
Alaska House of Representatives
The Alaska House of Representatives is the lower house in the Alaska Legislature, the state legislature of the U.S. state of Alaska. The House is composed of 40 members, each of whom represents a district of about 15,673 people . Members serve two-year terms without term limits...
from 1965-1973 as both a Republican and Democrat
Democratic Party (United States)
The Democratic Party is one of two major contemporary political parties in the United States, along with the Republican Party. The party's socially liberal and progressive platform is largely considered center-left in the U.S. political spectrum. The party has the lengthiest record of continuous...
, was elected again to the House in 1992 running under the AIP. He was elected to a district comprising mostly the area between the Aleutian Islands and Bristol Bay
Bristol Bay
Bristol Bay is the eastern-most arm of the Bering Sea, at 57° to 59° North 157° to 162° West in Southwest Alaska. Bristol Bay is 400 km long and 290 km, wide at its mouth...
. He switched his party affiliation back to Democrat at around the same time that Hickel switched, and continued to serve in the House until 2007. In recent years the movement has gained much strength.

On September 2, 2008, reports surfaced that according to the Alaska Division of Elections Todd Palin
Todd Palin
Todd Mitchell Palin is the husband of former Alaska Governor Sarah Palin, the 2008 vice-presidential nominee of the Republican Party. He is an American oil field production operator, commercial fisherman and champion snowmobile racer, winning the Tesoro Iron Dog race four times.-Early life:Palin...
, husband of then governor Sarah Palin, had registered as a member of the Alaskan Independence Party in 1995. He remained registered with the party until 2002.

In 2006, members of the AIP collected the one hundred signatures needed to place on the fall ballot an initiative calling for Alaska to secede from the union or, if that was found not to be legally possible, directing the state to work to make secession legal. However, in the case of Kohlhaas v. State (11/17/2006) sp-6072, 147 P3d 714, the State Supreme Court ruled any attempt at secession to be unconstitutional and the initiative was not approved to appear on the fall ballot.


Notable past party officials include: