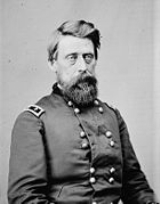 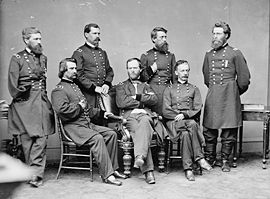 Davis was born near present-day Memphis
Memphis, Indiana
Memphis is a census-designated place in Clark County, Indiana, United States. The population was 695 at the 2010 census.-Geography:Memphis is located at ....
, Indiana
Indiana
Indiana is a US state, admitted to the United States as the 19th on December 11, 1816. It is located in the Midwestern United States and Great Lakes Region. With 6,483,802 residents, the state is ranked 15th in population and 16th in population density. Indiana is ranked 38th in land area and is...
. He served as an enlisted volunteer during the Mexican-American War. Upon completion of his volunteer service, he was accepted for an Army commission and served in the 1st U.S. Artillery
Artillery
Originally applied to any group of infantry primarily armed with projectile weapons, artillery has over time become limited in meaning to refer only to those engines of war that operate by projection of munitions far beyond the range of effect of personal weapons...
.

During this time of convalescence, on September 29, 1862, Davis got into an argument with his superior officer, Maj. Gen. William "Bull" Nelson, in the Galt House
Galt House
The Galt House is a 25-story, 1300-room hotel in Louisville, Kentucky. The original hotel was erected in 1837. The current Galt House is presently the city's only hotel on the Ohio River. Many noted people have stayed at the Galt House, including Jefferson Davis, Charles Dickens, Abraham Lincoln...
in Louisville, Kentucky. Davis had been offended by insults on prior occasions and when his face was slapped by Nelson, Davis shot and killed him. He was arrested and imprisoned, but Maj. Gen. Horatio G. Wright came to his aid and was able to get him released from prison. He avoided conviction for the murder because there was a need for experienced field commanders in the Union Army
Union Army
The Union Army was the land force that fought for the Union during the American Civil War. It was also known as the Federal Army, the U.S. Army, the Northern Army and the National Army...
. 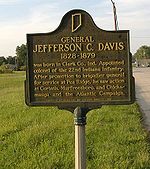 Davis was a capable commander, but because of the murder of General Nelson, he never received a full promotion higher than brigadier general of volunteers. He did however receive a brevet
Brevet (military)
In many of the world's military establishments, brevet referred to a warrant authorizing a commissioned officer to hold a higher rank temporarily, but usually without receiving the pay of that higher rank except when actually serving in that role. An officer so promoted may be referred to as being...
promotion to major general
Major general (United States)
In the United States Army, United States Marine Corps, and United States Air Force, major general is a two-star general-officer rank, with the pay grade of O-8. Major general ranks above brigadier general and below lieutenant general...
of volunteers on August 8, 1864 (for his service at the Battle of Kennesaw Mountain
Battle of Kennesaw Mountain
The Battle of Kennesaw Mountain was fought on June 27, 1864, during the Atlanta Campaign of the American Civil War. It was the most significant frontal assault launched by Union Maj. Gen. William T. Sherman against the Confederate Army of Tennessee under Gen. Joseph E...
), and was appointed commanding officer of the XIV Corps during the Atlanta Campaign
Atlanta Campaign
The Atlanta Campaign was a series of battles fought in the Western Theater of the American Civil War throughout northwest Georgia and the area around Atlanta during the summer of 1864. Union Maj. Gen. William T. Sherman invaded Georgia from the vicinity of Chattanooga, Tennessee, beginning in May...
, a post he retained until the end of the war. He received a brevet promotion to brigadier general in the regular army on March 20, 1865. However, it was his actions during the Ebenezer Creek
Ebenezer Creek
Ebenezer Creek is a location in Georgia where hundreds of freed black slaves were abandoned during General Sherman's march during the American Civil War. After the army had crossed over on pontoons the commander in charge of the crossing, BG Jefferson C. Davis, cut them loose, leaving the escaped...
passing and his racist attitude towards freed slaves, that causes his legacy to be clouded in continued controversy. As Sherman's army proceeded on the March to the Sea
Sherman's March to the Sea
Sherman's March to the Sea is the name commonly given to the Savannah Campaign conducted around Georgia from November 15, 1864 to December 21, 1864 by Maj. Gen. William Tecumseh Sherman of the Union Army in the American Civil War...
toward Savannah, Georgia
Savannah, Georgia
Savannah is the largest city and the county seat of Chatham County, in the U.S. state of Georgia. Established in 1733, the city of Savannah was the colonial capital of the Province of Georgia and later the first state capital of Georgia. Today Savannah is an industrial center and an important...
, on December 9, 1864, Davis ordered a pontoon bridge removed before the African-American refugees following his corps could cross the creek. Several hundred were captured by the Confederate cavalry or drowned in the creek, attempting to escape.

He gained fame when he assumed field command of the U.S. forces during the Modoc War
Modoc War
The Modoc War, or Modoc Campaign , was an armed conflict between the Native American Modoc tribe and the United States Army in southern Oregon and northern California from 1872–1873. The Modoc War was the last of the Indian Wars to occur in California or Oregon...
, after General Edward Canby
Edward Canby
Edward Richard Sprigg Canby was a career United States Army officer and a Union general in the American Civil War, Reconstruction era, and the Indian Wars...
and Rev. Eleazer Thomas had been assassinated during peace talks. His presence in the field restored the confidence of the soldiers after their recent setbacks against the Modoc. Davis' campaign resulted in the Battle of Dry Lake
Battle of Dry Lake
The Battle of Dry Lake, also known as Sorass Lake, was the first decisive victory of the United States over the Modoc Indians in northern California in 1873. The battle led to the splintering of the Modoc bands, and was the last major battle of the Modoc War.-Background:On May 2, 1873, Colonel...
and the eventual surrender of notable leaders such as Hooker Jim
Hooker Jim
Hooker Jim was a Modoc warrior who played a pivotal role in the Modoc War. Hooker Jim was the son-in-law of tribal medicine man Curley Headed Doctor. After white settlers massacred Modoc women and children contemporaneously with the Battle of Lost River, Hooker Jim led a group of Modocs overland...
and Captain Jack.

Davis died in Chicago, Illinois, and is buried in Crown Hill Cemetery
Crown Hill Cemetery
Crown Hill Cemetery, located at 700 West 38th Street in Indianapolis, is the third largest non-governmental cemetery in the United States at . It contains of paved road, over 150 species of trees and plants, over 185,000 graves, and services roughly 1,500 burials per year. It sits on the highest...
, Indianapolis, Indiana
Indianapolis, Indiana
Indianapolis is the capital of the U.S. state of Indiana, and the county seat of Marion County, Indiana. As of the 2010 United States Census, the city's population is 839,489. It is by far Indiana's largest city and, as of the 2010 U.S...
.