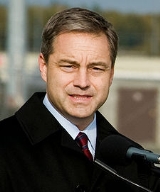 Encyclopedia
Sean R. Parnell is an American
United States
The United States of America is a federal constitutional republic comprising fifty states and a federal district...
Republican
Republican Party (United States)
The Republican Party is one of the two major contemporary political parties in the United States, along with the Democratic Party. Founded by anti-slavery expansion activists in 1854, it is often called the GOP . The party's platform generally reflects American conservatism in the U.S...
politician who is the tenth and current Governor of Alaska
Alaska
Alaska is the largest state in the United States by area. It is situated in the northwest extremity of the North American continent, with Canada to the east, the Arctic Ocean to the north, and the Pacific Ocean to the west and south, with Russia further west across the Bering Strait...
. He succeeded Sarah Palin
Sarah Palin
Sarah Louise Palin is an American politician, commentator and author. As the Republican Party nominee for Vice President in the 2008 presidential election, she was the first Alaskan on the national ticket of a major party and first Republican woman nominated for the vice-presidency.She was...
following her resignation
Resignation of Sarah Palin
The resignation of Sarah Palin as Governor of Alaska was announced on July 3, 2009 and became effective on July 26. Sean Parnell, the lieutenant governor, took Palin's place as governor.-Reasons for the resignation:...
, and was sworn in at the Governor's Picnic in Fairbanks
Fairbanks
Fairbanks may refer to:Places in the United States*Fairbanks, Alaska, city*Fairbanks, California, unincorporated community in El Dorado County*Fairbanks, Mendocino County, California, former settlement*Fairbanks, Indiana, unincorporated community...
on July 26, 2009. Parnell was elected to a full term as Governor in November 2010, becoming the first unelected Alaska Governor to be later elected in his own right.

Sean Parnell was born in Hanford, California
Hanford, California
Hanford is an important commercial and cultural center in the south central San Joaquin Valley and is the county seat of Kings County, California. It is the principal city of the Hanford-Corcoran, California Metropolitan Statistical Area , which encompasses all of Kings County, including the cities...
to Kevin P. "Pat" (born September 16, 1937) and Thelma Carol (née Liebherr) Parnell. Pat Parnell was stationed at Fort Richardson, near Anchorage, Alaska
Anchorage, Alaska
Anchorage is a unified home rule municipality in the southcentral part of the U.S. state of Alaska. It is the northernmost major city in the United States...
, while in the U.S. Army in the late 1950s, and returned to Alaska
Alaska
Alaska is the largest state in the United States by area. It is situated in the northwest extremity of the North American continent, with Canada to the east, the Arctic Ocean to the north, and the Pacific Ocean to the west and south, with Russia further west across the Bering Strait...
with his family in 1973, establishing residence in Anchorage. Pat Parnell established a photocopy and office supply business alongside the busy Seward Highway
Seward Highway
The Seward Highway is a highway in the U.S. state of Alaska that extends 127 miles from Seward to Anchorage. It was completed in 1951 and runs through the scenic Kenai Peninsula and Turnagain Arm, for which it was designated an All-American Road by the U.S...
in midtown Anchorage, while Thelma Parnell worked at Bartlett High School
Bartlett High School (Anchorage, Alaska)
Bartlett High School is a high school in Anchorage, Alaska. The high school enrolled 1,729 students as of 2007. Construction started in 1971 and the first classes were held in 1974, the school originally housed both Bartlett High School, named after U.S. Senator Bob Bartlett, and Begich Junior High...
and East Anchorage High School
East Anchorage High School
East Anchorage High School is a public high school in Anchorage in the U.S. state of Alaska. It is attended by approximately 2300 students...
, the latter being a short distance from their home. Sean Parnell attended East Anchorage High, graduating in 1980. He has a younger brother named Schöen.

In 2005, he joined the lobbying firm of Patton Boggs
Patton Boggs
Patton Boggs is a full service law firm and lobbyist headquartered in Washington, D.C. It has more than 600 lawyers and professionals in nine locations in the United States and the Middle East. Patton Boggs specializes in , , , , international and trade law with over 200 international clients from...
, where he advised clients on state and federal regulations in developing major oil and gas projects. Patton Boggs represented ExxonMobil
ExxonMobil
Exxon Mobil Corporation or ExxonMobil, is an American multinational oil and gas corporation. It is a direct descendant of John D. Rockefeller's Standard Oil company, and was formed on November 30, 1999, by the merger of Exxon and Mobil. Its headquarters are in Irving, Texas...
in the Exxon Valdez
Exxon Valdez
Oriental Nicety, formerly Exxon Valdez, Exxon Mediterranean, SeaRiver Mediterranean, S/R Mediterranean, Mediterranean, and Dong Fang Ocean is an oil tanker that gained notoriety after running aground in Prince William Sound spilling hundreds of thousands of barrels of crude oil in Alaska...
oil spill litigation. In April 2005, Washingtonian
Washingtonian (magazine)
Washingtonian is a monthly magazine distributed in the Washington, DC area since 1965. The magazine describes itself as "the magazine Washington lives by." The magazine's core focuses are local feature journalism, guide book-style articles, and real estate advice.-Editorial Content:Washingtonian...
and the Dallas Morning News reported that Patton Boggs was the first in revenue among lobbyists.

Parnell left Patton Boggs less than two years later on December 3, 2006 to advise Governor Sarah Palin on issues related to commercializing Alaska North Slope
Alaska North Slope
The Alaska North Slope is the region of the U.S. state of Alaska located on the northern slope of the Brooks Range along the coast of two marginal seas of the Arctic Ocean, the Chukchi Sea being on the western side of Point Barrow, and the Beaufort Sea on the eastern.The region contains the...
gas.

In 2005, Parnell ran in the Republican primary to become lieutenant governor. In the general election, he ran as Palin's running mate. In Alaska, the lieutenant governor runs separately from the governor in the primaries, but after the primaries, the nominees for governor and lieutenant governor run together as a slate
Slate (elections)
A slate is a group of candidates that run in multi-seat or multi-position elections on a common platform.The common platform may be because the candidates are all members of a political party, have the same or similar policies, or some other reason....
. Palin and Parnell were elected.

On March 14, 2008, Parnell began his campaign to take on embattled 18-term Congress member Don Young
Don Young
Donald Edwin "Don" Young is the U.S. Representative for , serving since 1973. He is a member of the Republican Party.Young is the 6th most senior U.S. Representative and the 2nd most senior Republican Representative, as well as the 2nd most senior Republican in Congress as a whole...
in the August 26 Republican primary. His father was the Democratic
Democratic Party (United States)
The Democratic Party is one of two major contemporary political parties in the United States, along with the Republican Party. The party's socially liberal and progressive platform is largely considered center-left in the U.S. political spectrum. The party has the lengthiest record of continuous...
nominee running against Young in 1980. The result was a landslide; Young captured 73 percent of the vote, his largest reelection vote percentage until 2002.

Parnell was endorsed by Sarah Palin, National Review
National Review
National Review is a biweekly magazine founded by the late author William F. Buckley, Jr., in 1955 and based in New York City. It describes itself as "America's most widely read and influential magazine and web site for conservative news, commentary, and opinion."Although the print version of the...
magazine, and the anti-earmark
Earmark (politics)
In United States politics, an earmark is a legislative provision that directs approved funds to be spent on specific projects, or that directs specific exemptions from taxes or mandated fees...
Club for Growth
Club for Growth
The Club for Growth is a politically conservative 527 organization active in the United States of America, with an agenda focussed on taxation and other economic issues, and with an affiliated political action committee . The Club advocates lower taxes, limited government, less government spending,...
.

Parnell lost the primary
Primary election
A primary election is an election in which party members or voters select candidates for a subsequent election. Primary elections are one means by which a political party nominates candidates for the next general election....
for the U.S. House seat. The margin between Young, the incumbent, and Parnell was narrow, and the winner was not immediately clear. The result released on September 18 showed Young winning by 304 votes. Parnell said the odds of overturning Young's victory were too small to warrant a recount.

On July 26, 2009, halfway through her term as governor, Sarah Palin resigned. Parnell replaced her becoming Alaska's 10th governor in accordance with the Alaska Constitution
Alaska Constitution
The Constitution of the State of Alaska is the constitution of the U.S. state of Alaska. It was ratified in 1956 and took effect with Alaska's admission as a state on January 3, 1959.-The statehood movement:...
. Craig Campbell
Craig Campbell (politician)
Craig Eaton Campbell was the 12th Lieutenant Governor of Alaska, holding the office from August 10, 2009 through December 6 2010. Prior to that date, he was "temporary substitute" lieutenant governor for several weeks until being confirmed in the position by the State Legislature...
, commissioner of Alaska's Department of Military and Veterans Affairs, succeeded Parnell as lieutenant governor after Joe Schmidt, commissioner of corrections
Alaska Department of Corrections
The Department of Corrections of the state of Alaska is an agency of the state government responsible for corrections. The Department manages institutions, parole and probation. The current commissioner is Joe Schimdt...
and Palin's designated replacement for Parnell, refused the position. Parnell and Campbell were sworn in to their new positions on July 26 by Alaska Supreme Court
Alaska Supreme Court
The Alaska Supreme Court is the state supreme court in the State of Alaska's judicial department . The supreme court is composed of the chief justice and four associate justices, who are all appointed by the governor of Alaska and face judicial retention elections and who choose one of their own...
Associate Justice Daniel E. Winfree.

Parnell ran for a full term as governor in 2010. In the primary, he faced off against Bill Walker, a former Cabinet member and aide to former governor Walter J. Hickel, and Ralph Samuels
Ralph Samuels
Ralph Samuels Businessman and a member of the Republican Party and candidate for Governor of Alaska, that served as a State Representative of the Alaska State Legislature from 2002-2008 representing House District 29 and serving as the Majority Leader.-Educational background:Attended schools in...
, a retiring member of the Alaska House of Representatives
Alaska House of Representatives
The Alaska House of Representatives is the lower house in the Alaska Legislature, the state legislature of the U.S. state of Alaska. The House is composed of 40 members, each of whom represents a district of about 15,673 people . Members serve two-year terms without term limits...
. Though Walker seemed to gain a lot of traction towards the end based on the issue of building a long-awaited natural gas pipeline, Samuels and Walker split the anti-Parnell vote and Parnell won the nomination. He faced off against former House Majority Leader and 2008 Congressional nominee, Ethan Berkowitz
Ethan Berkowitz
Ethan A. Berkowitz is an American politician who was the Alaska State Representative for District 26 from 1997 through 2006, serving as Democratic Party Minority Leader from 1999 to 2006.-Early life and education:...
. and was elected with Mead Treadwell
Mead Treadwell
Mead Treadwell is the 13th and current Lieutenant Governor of Alaska and former Chair of the U.S. Arctic Research Commission.- Work with the Arctic Research Commission :...
who had won the August primary for Lieutenant Governor. Though Berkowitz, and former 2006 Congressional nominee, Diane Benson, seemed to have the strongest ticket seen by Democrats in a while that included endorsements from Walker; Parnell-Treadwell eventually defeated Berkowitz-Benson by over ten points.