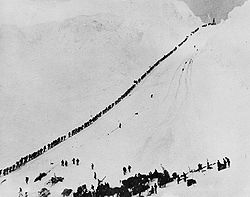 It was the discovery of gold in the Yukon in 1896 that brought attention to the United States' northern possession. A wave of fortune hunters clamored for passage to the Klondike
Klondike, Yukon
The Klondike is a region of the Yukon in northwest Canada, east of the Alaska border. It lies around the Klondike River, a small river that enters the Yukon from the east at Dawson....
, but the Klondike was in Yukon Territory, Canada, not Alaska as many a would-be miner believed. Still, the easiest route was by ship to Skagway, or Dyea, in Southeast Alaska. Miner
Miner
A miner is a person whose work or business is to extract ore or minerals from the earth. Mining is one of the most dangerous trades in the world. In some countries miners lack social guarantees and in case of injury may be left to cope without assistance....
s had their choice of two passes across the mountains to the Yukon fields: The Chilkoot Trail
Chilkoot Trail
The Chilkoot Trail is a 33 miles trail through the Coast Mountains that leads from Dyea, Alaska in the United States, to Bennett, British Columbia in Canada....
, an old Native route, started in Dyea, and the White Pass
White Pass
White Pass is a mountain pass through the Boundary Ranges of the Coast Mountains on the border of the U.S. state of Alaska and the province of British Columbia, Canada...
, also called Dead Horse Trail, was in Skagway. The Chilkoot Trail was a shorter trip but had a considerably steeper climb. The White Pass took a little longer, but was at a lower elevation. Skagway and the White Pass trail also had a severe crime problem, organized and led by the infamous badman, Soapy Smith
Soapy Smith
Jefferson Randolph "Soapy" Smith II was an American con artist and gangster who had a major hand in the organized criminal operations of Denver, Colorado; Creede, Colorado; and Skagway, Alaska, from 1879 to 1898. He was killed in the famed Shootout on Juneau Wharf...
. Smith was killed in Skagway at the Shootout on Juneau Wharf
Shootout on Juneau Wharf
The Shootout on Juneau Wharf was a gunfight that occurred at about 9:15 PM on Friday, July 8, 1898, in Skagway, District of Alaska, in the United States.-Background:...
.

Alaska still had plenty of gold of its own, and many who didn't make their fortunes in the Klondike strike came back to look for it. An earlier strike had established Juneau in Southeast Alaska, and gold was found in Nome
Nome, Alaska
Nome is a city in the Nome Census Area in the Unorganized Borough of the U.S. state of Alaska, located on the southern Seward Peninsula coast on Norton Sound of the Bering Sea. According to the 2010 Census, the city population was 3,598. Nome was incorporated on April 9, 1901, and was once the...
in 1899. For several years a prospector named Felix Pedro
Felix Pedro
Felice Pedroni , known best to Americans by his Hispanicized alias Felix Pedro, was an Italian immigrant whose discovery of gold in Interior Alaska marked the beginning of the 1902 Fairbanks Gold Rush.-Early life:...
had been searching in the Tanana Hills of the Interior for a gold-rich creek he had stumbled upon years earlier but had been forced to abandon. As the summer of 1901 drew to a close, Pedro was about to embark with his partner on a 165-mile walk to Circle City for supplies. He met up with E.T. Barnette
E.T. Barnette
Elbridge Truman Barnette , Yukon riverboat captain, banker, and swindler, founded the city of Fairbanks, Alaska and served as its first mayor.-Biography:...
, who had been forced to disembark from the steamer
Steamboat
A steamboat or steamship, sometimes called a steamer, is a ship in which the primary method of propulsion is steam power, typically driving propellers or paddlewheels...
Lavelle Young with his entire load of supplies, some of which he sold to Pedro.

Replenished with supplies, Pedro continued his search in the area, and finally struck gold in July 1902. Shortly afterward Barnette's outpost was transformed into a booming town. Named Fairbanks
Fairbanks, Alaska
Fairbanks is a home rule city in and the borough seat of the Fairbanks North Star Borough in the U.S. state of Alaska.Fairbanks is the largest city in the Interior region of Alaska, and second largest in the state behind Anchorage...
in honor of a U.S. senator, the settlement grew as more miners and new businesses arrived. The town had shanties on the fringes, but the center offered many of the economic conveniences of the rest of the U.S. Traffic
Traffic
Traffic on roads may consist of pedestrians, ridden or herded animals, vehicles, streetcars and other conveyances, either singly or together, while using the public way for purposes of travel...
came through the river, and an overland route to Valdez
Valdez, Alaska
Valdez is a city in Valdez-Cordova Census Area in the U.S. state of Alaska. According to 2005 Census Bureau estimates, the population of the city is 4,020. The city is one of the most important ports in Alaska. The port of Valdez was named in 1790 after the Spanish naval officer Antonio Valdés y...
cut days off a trip to the contiguous United States. Eventually the Tanana Mining District became a huge gold producer, and the metal attracted Americans and Europeans alike. In 1902 the Alaska Railroad
Alaska Railroad
The Alaska Railroad is a Class II railroad which extends from Seward and Whittier, in the south of the state of Alaska, in the United States, to Fairbanks , and beyond to Eielson Air Force Base and Fort Wainwright in the interior of that state...
began to be built, which would connect from Seward
Seward, Alaska
Seward is a city in Kenai Peninsula Borough in the U.S. state of Alaska. According to 2005 Census Bureau estimates, the population of the city is 3,016....
to Fairbanks by 1914, though Alaska still doesn't have a railroad connecting it to the lower 48 states today.

Many people in Alaska found ways to profit from the gold rushes without actually panning for the metal themselves. At Ruby Creek, a strike in 1907, and a more substantial one in 1910, brought the rush of miners to the area and created the town of Ruby
Ruby, Alaska
Ruby is a city in Yukon-Koyukuk Census Area, Alaska, United States. At the 2000 census the population was 188.-Geography:Ruby is located at .According to the United States Census Bureau, the city has a total area of ....
. The steamers the newcomers used required large quantities of wood to keep them moving, and residents along the river supplemented their trapping and fishing by maintaining profitable wood lots. Ruby grew from a tent city in 1911 to a river port and then had running water in summer, a theater, shops, and cafés. By 1917, at the height of the rush, creeks south of Ruby had yielded $875,000 worth of gold.

Other precious and semiprecious metals were being mined in Alaska, too, particularly copper. In 1910, the richest copper mine in the world started operation at Kennicott in the Wrangell-St. Elias Mountains. The mine extracted more than 591,535 tons of copper ore from the earth, and at its peak employed more than 800 workers. The more traditional ways of life, fishing, in particular, also provided a livelihood for many Alaskans, particularly after canning
Canning
Canning is a method of preserving food in which the food contents are processed and sealed in an airtight container. Canning provides a typical shelf life ranging from one to five years, although under specific circumstances a freeze-dried canned product, such as canned, dried lentils, can last as...
was introduced. In 1878 businessmen built the first two canneries at Klawock and Sitka. In 1883 the Arctic Pack Company established a cannery at Nushagak Bay in Southwest Alaska, where they were able to exploit the immense runs of salmon. Two years later the Alaska Packing Company opened a cannery across the bay, and by 1908, 10 canneries ringed Nushagak Bay in Southwest Alaska. Kodiak's first canneries were built in the late 19th century, when word of phenomenal fish runs became widespread. 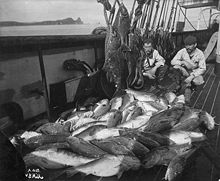 By the turn of the 20th century, commercial fishing was gaining a foothold in the Aleutian Islands. Packing houses salted cod
Cod
Cod is the common name for genus Gadus, belonging to the family Gadidae, and is also used in the common name for various other fishes. Cod is a popular food with a mild flavor, low fat content and a dense, flaky white flesh. Cod livers are processed to make cod liver oil, an important source of...
and herring
Herring
Herring is an oily fish of the genus Clupea, found in the shallow, temperate waters of the North Pacific and the North Atlantic oceans, including the Baltic Sea. Three species of Clupea are recognized. The main taxa, the Atlantic herring and the Pacific herring may each be divided into subspecies...
, and salmon canneries were opened. Another traditional occupation, whaling, continued with no regard for over-hunting. They pushed the bowhead whale
Bowhead Whale
The bowhead whale is a baleen whale of the right whale family Balaenidae in suborder Mysticeti. A stocky dark-colored whale without a dorsal fin, it can grow to in length. This thick-bodied species can weigh to , second only to the blue whale, although the bowhead's maximum length is less than...
s to the edge of extinction for the oil in their tissue (though in recent years, due to a decline in commercial whaling, their populations have rebounded enough for Natives to harvest many each year without affecting the population). The Aleuts soon suffered severe problems due to the depletion of the fur seal
Pinniped
Pinnipeds or fin-footed mammals are a widely distributed and diverse group of semiaquatic marine mammals comprising the families Odobenidae , Otariidae , and Phocidae .-Overview: Pinnipeds are typically sleek-bodied and barrel-shaped...
s and sea otters which they needed for survival. As well as requiring the flesh for food, they also used the skins to cover their boats, without which they could not hunt. The Americans also expanded into the Interior and Arctic Alaska, exploiting the furbearers, fish, and other game on which Natives depended.
The source of this article is wikipedia, the free encyclopedia.  The text of this article is licensed under the GFDL.