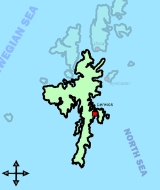 Lerwick, Shetland's only burgh
Burgh
A burgh was an autonomous corporate entity in Scotland and Northern England, usually a town. This type of administrative division existed from the 12th century, when King David I created the first royal burghs. Burgh status was broadly analogous to borough status, found in the rest of the United...
, had a population of about 7,500 residents in 2010 and is the most northerly and most easterly town
Town
A town is a human settlement larger than a village but smaller than a city. The size a settlement must be in order to be called a "town" varies considerably in different parts of the world, so that, for example, many American "small towns" seem to British people to be no more than villages, while...
in Scotland (there are other large settlements more northerly in Shetland, most notable the village of Brae
Brae
Brae is a settlement on the mainland of the Shetland Islands in Scotland. It is located at the northeast end of Busta Voe, on the narrow isthmus that separates the mainland from Northmavine...
).

One of the UK's coastal weather stations is located at Lerwick.

Lerwick is a name with roots in Old Norse and its local descendant, Norn
Norn language
Norn is an extinct North Germanic language that was spoken in Shetland and Orkney, off the north coast of mainland Scotland, and in Caithness. After the islands were pledged to Scotland by Norway in the 15th century, it was gradually replaced by Scots and on the mainland by Scottish...
, which was spoken in Shetland until the mid-19th century. The name "Lerwick" means bay of clay. The corresponding Norwegian name is Leirvik, leir meaning clay
Clay
Clay is a general term including many combinations of one or more clay minerals with traces of metal oxides and organic matter. Geologic clay deposits are mostly composed of phyllosilicate minerals containing variable amounts of water trapped in the mineral structure.- Formation :Clay minerals...
and vik meaning "bay" or "inlet". Towns with similar names
Leirvík
Leirvík is a town on the Faroe Islands and was an important regional ferry harbour at the east coast of the second largest island Eysturoy. Leirvík has 867 inhabitants...
exist in south western Norway (Leirvik) and on the Faroe Islands as well.

Evidence of human settlement in the Lerwick area dates back 3,000 years, centred around the Broch of Clickimin, which was constructed in the first century BC.

The first settlement to be known as Lerwick was founded in the 17th century as a herring
Herring
Herring is an oily fish of the genus Clupea, found in the shallow, temperate waters of the North Pacific and the North Atlantic oceans, including the Baltic Sea. Three species of Clupea are recognized. The main taxa, the Atlantic herring and the Pacific herring may each be divided into subspecies...
and white fish seaport to trade with the Dutch fishing fleet. This settlement was on the mainland (west) side of Bressay Sound, a natural harbour with south and north entrances between the Shetland mainland and the island of Bressay
Bressay
-Geography and geology:Bressay lies due south of Whalsay, west of Noss, and north of Mousa. At , it is the fifth largest island in Shetland. The population is around 400 people, concentrated in the middle of the west coast, around Glebe, Fullaburn and Maryfield....
.

This collection of wooden huts was burned to the ground twice: in the 17th century by residents of Scalloway
Scalloway
Scalloway is the largest settlement on the North Atlantic coast of Mainland, Shetland with a population of approximately 812, at the 2001 census...
, then the capital of Shetland, who disapproved of the immoral and drunken activities of the assembled fishermen and sailors; and again in 1702 by the French fleet.

Fort Charlotte was built in the mid 17th Century on Lerwick’s waterfront, and permanent stone-built buildings began to be erected around the fort and along the shoreline. The principal concentration of buildings was in the "lanes" area: a steep hillside stretching from the shoreline to Hillhead at the top.

The next period of significant expansion was during the North Sea oil
North Sea oil
North Sea oil is a mixture of hydrocarbons, comprising liquid oil and natural gas, produced from oil reservoirs beneath the North Sea.In the oil industry, the term "North Sea" often includes areas such as the Norwegian Sea and the area known as "West of Shetland", "the Atlantic Frontier" or "the...
boom of the 1970s when large housing developments were built to the north of Staney Hill (located in Lerwick) and to the south (Nederdale and Sandveien).

Lerwick has an oceanic climate
Oceanic climate
An oceanic climate, also called marine west coast climate, maritime climate, Cascadian climate and British climate for Köppen climate classification Cfb and subtropical highland for Köppen Cfb or Cwb, is a type of climate typically found along the west coasts at the middle latitudes of some of the...
like the rest of the British Isles
British Isles
The British Isles are a group of islands off the northwest coast of continental Europe that include the islands of Great Britain and Ireland and over six thousand smaller isles. There are two sovereign states located on the islands: the United Kingdom of Great Britain and Northern Ireland and...
with cool to cold temperatures all year long. This is particularly pronounced by virtue of Lerwick being on a small isolated island, so even extreme temperature records are subdued; the record high stands at just 23.4 °C (74.1 °F) (July 1991) and the record low just -8.9 C (January 1952 & 1959). Lerwick is also a very cloudy town averaging only 1065 sunshine hours annually.

Lerwick is a busy fishing
Fishing
Fishing is the activity of trying to catch wild fish. Fish are normally caught in the wild. Techniques for catching fish include hand gathering, spearing, netting, angling and trapping....
and ferry
Ferry
A ferry is a form of transportation, usually a boat, but sometimes a ship, used to carry primarily passengers, and sometimes vehicles and cargo as well, across a body of water. Most ferries operate on regular, frequent, return services...
port. The harbour also services vessels supporting the offshore oil
Petroleum
Petroleum or crude oil is a naturally occurring, flammable liquid consisting of a complex mixture of hydrocarbons of various molecular weights and other liquid organic compounds, that are found in geologic formations beneath the Earth's surface. Petroleum is recovered mostly through oil drilling...
industry.

Significant buildings in Lerwick include Fort Charlotte, Lerwick Town Hall
Lerwick Town Hall
Lerwick Town Hall is located in central Lerwick, Shetland. It was completed in 1884 during a period of expansion in Lerwick due to the wealth the herring industry brought...
, the Böd of Gremista
Böd of Gremista
The Böd of Gremista, situated at the north end of Lerwick, Shetland, is a typical 18th century Shetland fishing booth . It is protected as a category B listed building.-History:...
, Shetland Museum and Archives and Clickimin Broch
Clickimin broch
right|200px|thumb|The approach to Clickimin brochThe Broch of Clickimin broch is a large and well preserved, though somewhat 'restored' broch near the town of Lerwick in Shetland, Scotland. Originally built on an island in a small loch , approached by a stone causeway, the structure contains a...
.

There are several churches in Lerwick, including:

Northlink Ferries
Northlink Ferries
NorthLink Ferries operates daily ferry services between mainland Scotland and the northern archipelagos of Orkney and Shetland. NorthLink Ferries is a wholly owned subsidiary of David MacBrayne Ltd, whose sole shareholder is the Scottish Government.-History:...
operate a daily overnight ferry service between Lerwick and Aberdeen
Aberdeen
Aberdeen is Scotland's third most populous city, one of Scotland's 32 local government council areas and the United Kingdom's 25th most populous city, with an official population estimate of ....
, regularly calling in to Kirkwall
Kirkwall
Kirkwall is the biggest town and capital of Orkney, off the coast of northern mainland Scotland. The town is first mentioned in Orkneyinga saga in the year 1046 when it is recorded as the residence of Rögnvald Brusason the Earl of Orkney, who was killed by his uncle Thorfinn the Mighty...
in the Orkney Islands
Orkney Islands
Orkney also known as the Orkney Islands , is an archipelago in northern Scotland, situated north of the coast of Caithness...
.

The Shetland Islands Council
Shetland Islands Council
The Shetland Islands Council is the local authority for Shetland. It was established by the Local Government Act 1973 and is the successor to the former Lerwick Town Council and Zetland County Council...
operate a ro-ro ferry service to Out Skerries and Bressay
Bressay
-Geography and geology:Bressay lies due south of Whalsay, west of Noss, and north of Mousa. At , it is the fifth largest island in Shetland. The population is around 400 people, concentrated in the middle of the west coast, around Glebe, Fullaburn and Maryfield....
from a terminal in the centre of the town.

Lerwick has strong ties with Scandinavian countries, particularly Norway (Lerwick has a friendship agreement with Måløy
Måløy
is a town and the administrative centre of the municipality of Vågsøy in Sogn og Fjordane county, Norway. Måløy is located on the southeastern side of the island of Vågsøy, about northeast of the village of Holvik and about south of Raudeberg. The Måløybrua connects the town to the village of...
in Norway), and this is reflected in the street names of Lerwick (e.g. King Harald Street, King Haakon Street).

Recently there has been an increase in antisocial behaviour due to local uptake of British yob
Yobbo
Yobbo or yob is a slang term for an uncouth or thuggish working-class person. The word derives from a back slang reading of the word "boy" .-Britain:Dr. C. T...
culture as well as an influx of troublemakers from elsewhere including drug traffickers. These people (mainly youths) have caused an upsurge in crime in the area that shows no signs of going away.