Encyclopedia
Norn is an extinct North Germanic language that was spoken in Shetland and Orkney, off the north coast of mainland Scotland
Scotland
Scotland is a country that is part of the United Kingdom. Occupying the northern third of the island of Great Britain, it shares a border with England to the south and is bounded by the North Sea to the east, the Atlantic Ocean to the north and west, and the North Channel and Irish Sea to the...
, and in Caithness
Caithness
Caithness is a registration county, lieutenancy area and historic local government area of Scotland. The name was used also for the earldom of Caithness and the Caithness constituency of the Parliament of the United Kingdom . Boundaries are not identical in all contexts, but the Caithness area is...
. After the islands were pledged
Pledge (law)
A pledge is a bailment or deposit of personal property to a creditor to secure repayment for some debt or engagement, The term is also used to denote the property which constitutes the security....
to Scotland by Norway in the 15th century, it was gradually replaced by Scots
Scots language
Scots is the Germanic language variety spoken in Lowland Scotland and parts of Ulster . It is sometimes called Lowland Scots to distinguish it from Scottish Gaelic, the Celtic language variety spoken in most of the western Highlands and in the Hebrides.Since there are no universally accepted...
and on the mainland by Scottish Gaelic.

It is not known exactly when Norn became extinct. The last reports of Norn speakers are claimed to be from the 19th century, but it is more likely that the language was dying out in the late 18th century. The isolated islands of Foula
Foula
Foula in the Shetland Islands of Scotland is one of Great Britain’s most remote permanently inhabited islands. Owned since the turn of the 20th century by the Holbourn family, the island was the location for the film The Edge of the World...
and Unst
Unst
Unst is one of the North Isles of the Shetland Islands, Scotland. It is the northernmost of the inhabited British Isles and is the third largest island in Shetland after the Mainland and Yell. It has an area of .Unst is largely grassland, with coastal cliffs...
are variously claimed as the last refuges of the language in Shetland, where there were people "who could repeat sentences in Norn, probably passages from folk songs or poems, as late as 1893. Walter Sutherland
Walter Sutherland (Norn)
Walter Sutherland of Skaw on the island of Unst in Shetland was reported to be the last native speaker of Norn, a Germanic language which had once been spoken throughout Shetland, Orkney and Caithness...
from Skaw in Unst, who died about 1850, has been cited as the last native speaker of the Norn language. However, fragments of vocabulary survived the death of the main language and remain to this day, mainly in place-names and terms referring to plants, animals, weather, mood, and fishing vocabulary.

Dialects of Norse had also been spoken on mainland Scotland—for example, in Caithness
Caithness
Caithness is a registration county, lieutenancy area and historic local government area of Scotland. The name was used also for the earldom of Caithness and the Caithness constituency of the Parliament of the United Kingdom . Boundaries are not identical in all contexts, but the Caithness area is...
—but here they became extinct many centuries before Norn died on Orkney and Shetland. Hence, some scholars also speak about "Caithness Norn", but others avoid this. Even less is known about "Caithness Norn" than about Orkney and Shetland Norn. Almost no written Norn has survived, but what little remains includes a version of the Lord's Prayer
Lord's Prayer
The Lord's Prayer is a central prayer in Christianity. In the New Testament of the Christian Bible, it appears in two forms: in the Gospel of Matthew as part of the discourse on ostentation in the Sermon on the Mount, and in the Gospel of Luke, which records Jesus being approached by "one of his...
and a ballad
Ballad
A ballad is a form of verse, often a narrative set to music. Ballads were particularly characteristic of British and Irish popular poetry and song from the later medieval period until the 19th century and used extensively across Europe and later the Americas, Australia and North Africa. Many...
. Michael Barnes
Michael Barnes
Michael Barnes may refer to:* Michael Barnes , footballer* Michael D. Barnes , U.S. politician* Michael Barnes , Canadian writer* Michael Barnes , British Labour MP...
, professor of Scandinavian Studies at University College London, has published a study, The Norn Language of Orkney and Shetland.

Few written texts remain. It is to be distinguished from the present day 'dialect', termed by linguists Shetlandic
Shetlandic
Shetlandic, usually referred to as Shetland by native speakers, is spoken in the Shetland Islands north of mainland Scotland and is, like Orcadian, a dialect of Insular Scots...
.

The phonology
Phonology
Phonology is, broadly speaking, the subdiscipline of linguistics concerned with the sounds of language. That is, it is the systematic use of sound to encode meaning in any spoken human language, or the field of linguistics studying this use...
of Norn can never be determined with much precision due to the lack of source material, but the general aspects can be extrapolated from the few written sources that do exist. Norn shared many traits with the dialects of south-west Norway
Norway
Norway , officially the Kingdom of Norway, is a Nordic unitary constitutional monarchy whose territory comprises the western portion of the Scandinavian Peninsula, Jan Mayen, and the Arctic archipelago of Svalbard and Bouvet Island. Norway has a total area of and a population of about 4.9 million...
. This includes a voicing of /p, t, k/ to [b, d, ɡ] before or between vowels and (in the Shetland dialect
Shetlandic
Shetlandic, usually referred to as Shetland by native speakers, is spoken in the Shetland Islands north of mainland Scotland and is, like Orcadian, a dialect of Insular Scots...
, but only partially in the Orkney dialect
Orcadian dialect
Orcadian dialect is a dialect of Insular Scots, itself a dialect of the Scots language. It is derived from Lowland Scots with a degree of influence from the Norn language, which is an extinct North Germanic language. Orcadian is spoken in Orkney, north of mainland Scotland.The other Insular Scots...
) a conversion of /θ/ and /ð/ ("thing" and "that" respectively) to [t] and [d] respectively.

The features of Norn grammar were very similar to the other Scandinavian languages. There were two numbers, three genders and four cases (nominative, accusative, genitive and dative). The two main conjugations of verb
Verb
A verb, from the Latin verbum meaning word, is a word that in syntax conveys an action , or a state of being . In the usual description of English, the basic form, with or without the particle to, is the infinitive...
s in present
Present tense
The present tense is a grammatical tense that locates a situation or event in present time. This linguistic definition refers to a concept that indicates a feature of the meaning of a verb...
and past tense
Past tense
The past tense is a grammatical tense that places an action or situation in the past of the current moment , or prior to some specified time that may be in the speaker's past, present, or future...
were also present and like all other North Germanic languages, it used a suffix
Suffix
In linguistics, a suffix is an affix which is placed after the stem of a word. Common examples are case endings, which indicate the grammatical case of nouns or adjectives, and verb endings, which form the conjugation of verbs...
instead of a prepositioned article to indicate definiteness as in modern Scandinavian: man(n) ("man"); mannen ("the man"). Though it is difficult to be certain of much of the aspects of Norn grammar, documents indicate that it may have featured subjectless clauses, which were common in the West Scandinavian languages.

The following are Norn and old Norse versions of the Lord's Prayer
Lord's Prayer
The Lord's Prayer is a central prayer in Christianity. In the New Testament of the Christian Bible, it appears in two forms: in the Gospel of Matthew as part of the discourse on ostentation in the Sermon on the Mount, and in the Gospel of Luke, which records Jesus being approached by "one of his...
: http://www.christusrex.org/www1/pater/index-mn.html#N

Modern Norwegian
Norwegian language
Norwegian is a North Germanic language spoken primarily in Norway, where it is the official language. Together with Swedish and Danish, Norwegian forms a continuum of more or less mutually intelligible local and regional variants .These Scandinavian languages together with the Faroese language...
(nynorsk
Nynorsk
Nynorsk or New Norwegian is one of two official written standards for the Norwegian language, the other being Bokmål. The standard language was created by Ivar Aasen during the mid-19th century, to provide a Norwegian alternative to the Danish language which was commonly written in Norway at the...
)

Modern Norwegian (bokmål
Bokmål
Bokmål is one of two official Norwegian written standard languages, the other being Nynorsk. Bokmål is used by 85–90% of the population in Norway, and is the standard most commonly taught to foreign students of the Norwegian language....
)


A Shetland "guddick" (riddle
Riddle
A riddle is a statement or question or phrase having a double or veiled meaning, put forth as a puzzle to be solved. Riddles are of two types: enigmas, which are problems generally expressed in metaphorical or allegorical language that require ingenuity and careful thinking for their solution, and...
) in Norn, which Jakob Jakobsen
Jakob Jakobsen
Dr. phil. Jakob Jakobsen, , was a Faroese linguist as well as a scholar of literature. He was the first Faroese person to earn a doctoral degree...
heard told on Unst
Unst
Unst is one of the North Isles of the Shetland Islands, Scotland. It is the northernmost of the inhabited British Isles and is the third largest island in Shetland after the Mainland and Yell. It has an area of .Unst is largely grassland, with coastal cliffs...
, the northernmost island in Shetland, in the 1890s. The same riddle is also known from the Faroe Islands
Faroe Islands
The Faroe Islands are an island group situated between the Norwegian Sea and the North Atlantic Ocean, approximately halfway between Scotland and Iceland. The Faroe Islands are a self-governing territory within the Kingdom of Denmark, along with Denmark proper and Greenland...
.

The answer is a cow. Four teats hang, four legs walk, two horns
Horn (anatomy)
A horn is a pointed projection of the skin on the head of various animals, consisting of a covering of horn surrounding a core of living bone. True horns are found mainly among the ruminant artiodactyls, in the families Antilocapridae and Bovidae...
and two ears stand skyward, two eyes show the way to the field and one tail comes shaking (dangling) behind. 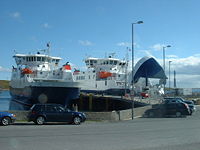 Most of the use of Norn/Norse in modern day Shetland and Orkney is purely ceremonial, and mostly in Old Norse, for example the Shetland motto, which is "Með lögum skal land byggja" ("with law shall land be built") which is the same motto used by the Icelandic police force.

Another example of the use of Norse/Norn in the Northern Isles
Northern Isles
The Northern Isles is a chain of islands off the north coast of mainland Scotland. The climate is cool and temperate and much influenced by the surrounding seas. There are two main island groups: Shetland and Orkney...
can be found in the names of ferries:

There are some private enthusiasts who are engaged in developing and disseminating a modern form called Nynorn, based upon linguistic analysis of the known records and Norse linguistics in general.