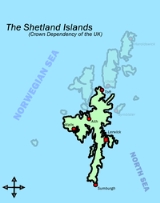 Encyclopedia
The Mainland is the main island
Island
An island or isle is any piece of sub-continental land that is surrounded by water. Very small islands such as emergent land features on atolls can be called islets, cays or keys. An island in a river or lake may be called an eyot , or holm...
of Shetland, Scotland
Scotland
Scotland is a country that is part of the United Kingdom. Occupying the northern third of the island of Great Britain, it shares a border with England to the south and is bounded by the North Sea to the east, the Atlantic Ocean to the north and west, and the North Channel and Irish Sea to the...
. The island contains Shetland's only burgh
Burgh
A burgh was an autonomous corporate entity in Scotland and Northern England, usually a town. This type of administrative division existed from the 12th century, when King David I created the first royal burghs. Burgh status was broadly analogous to borough status, found in the rest of the United...
, Lerwick
Lerwick
Lerwick is the capital and main port of the Shetland Islands, Scotland, located more than 100 miles off the north coast of mainland Scotland on the east coast of the Shetland Mainland...
, and is the centre of Shetland's ferry
Ferry
A ferry is a form of transportation, usually a boat, but sometimes a ship, used to carry primarily passengers, and sometimes vehicles and cargo as well, across a body of water. Most ferries operate on regular, frequent, return services...
and air connections.