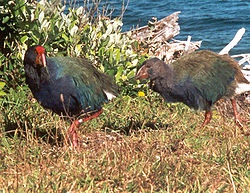 In paleontology
Paleontology
Paleontology "old, ancient", ὄν, ὀντ- "being, creature", and λόγος "speech, thought") is the study of prehistoric life. It includes the study of fossils to determine organisms' evolution and interactions with each other and their environments...
, a Lazarus taxon (plural taxa) is a taxon
Taxon
|thumb|270px|[[African elephants]] form a widely-accepted taxon, the [[genus]] LoxodontaA taxon is a group of organisms, which a taxonomist adjudges to be a unit. Usually a taxon is given a name and a rank, although neither is a requirement...
that disappears from one or more periods of the fossil record, only to appear again later. The term refers to the account in the Gospel of John
Gospel of John
The Gospel According to John , commonly referred to as the Gospel of John or simply John, and often referred to in New Testament scholarship as the Fourth Gospel, is an account of the public ministry of Jesus...
, in which Jesus
Jesus
Jesus of Nazareth , commonly referred to as Jesus Christ or simply as Jesus or Christ, is the central figure of Christianity...
raised Lazarus
Lazarus of Bethany
Lazarus of Bethany, also known as Saint Lazarus or Lazarus of the Four Days, is the subject of a prominent miracle attributed to Jesus in the Gospel of John, in which Jesus restores him to life four days after his death...
from the dead. Lazarus taxa are observational artifacts that appear to occur either because of (local) extinction
Extinction
In biology and ecology, extinction is the end of an organism or of a group of organisms , normally a species. The moment of extinction is generally considered to be the death of the last individual of the species, although the capacity to breed and recover may have been lost before this point...
, later resupplied, or as a sampling artifact
Sampling (statistics)
In statistics and survey methodology, sampling is concerned with the selection of a subset of individuals from within a population to estimate characteristics of the whole population....
. If the extinction is conclusively found to be total (global or worldwide) and the supplanting species is not a lookalike (an Elvis species
Elvis taxon
In paleontology, an Elvis taxon is a taxon which has been misidentified as having re-emerged in the fossil record after a period of presumed extinction, but is not actually a descendant of the original taxon, instead having developed a similar morphology through convergent evolution...
), the observational artifact is overcome. The fossil
Fossil
Fossils are the preserved remains or traces of animals , plants, and other organisms from the remote past...
record is inherently imperfect (only a very small fraction of organisms become fossilized) and contains gaps not necessarily caused by extinction, particularly when the number of individuals in a taxon becomes very low. If these gaps are filled by new fossil discoveries, a taxon will no longer be classified as a Lazarus taxon.

The terms "Lazarus effect" or "Lazarus species" have also found some acceptance in neontology
Neontology
Neontology is the part of biology which – in contrast to paleontology – deals with now living organisms. The term neontologist is usually used only by paleontologists to refer to non-paleontologists...
— the study of extant organisms, as contrasted with paleontology — as an organism that is rediscovered alive after having been widely considered extinct for years (a recurring IUCN Red List
IUCN Red List
The IUCN Red List of Threatened Species , founded in 1963, is the world's most comprehensive inventory of the global conservation status of biological species. The International Union for Conservation of Nature is the world's main authority on the conservation status of species...
species for example). Examples include Jerdon's courser
Jerdon's Courser
The Jerdon's Courser is a nocturnal bird belonging to the pratincole and courser family Glareolidae endemic to India. The bird was discovered by the surgeon-naturalist Thomas C. Jerdon in 1848 but not seen again until its rediscovery in 1986. This courser is a restricted-range endemic found...
, the ivory-billed woodpecker
Ivory-billed Woodpecker
The Ivory-billed Woodpecker is or was one of the largest woodpeckers in the world, at roughly 20 inches in length and 30 inches in wingspan. It was native to the virgin forests of the southeastern United States...
(disputed), the Mahogany Glider
Mahogany Glider
The mahogany glider is an endangered gliding possum native to a small region of coastal Queensland.-Appearance:A nocturnal arboreal marsupial, the mahogany glider closely resembles the sugar glider, the squirrel glider and the yellow-bellied glider., but is noticeably larger than any of its...
and the takahē
Takahe
The Takahē or South Island Takahē, Porphyrio hochstetteri is a flightless bird indigenous to New Zealand and belonging to the rail family. It was thought to be extinct after the last four known specimens were taken in 1898...
, a flightless bird endemic
Endemic (ecology)
Endemism is the ecological state of being unique to a defined geographic location, such as an island, nation or other defined zone, or habitat type; organisms that are indigenous to a place are not endemic to it if they are also found elsewhere. For example, all species of lemur are endemic to the...
to New Zealand. However, in these cases being "extinct" strongly relates to the sampling intensity of the IUCN, and that such a period of apparent extinction is too short for species to be designated as "Lazarus taxa" (in its paleontological meaning).

Lazarus taxa that reappear in nature after being known only as old enough fossils can be seen as an informal subcategory of the journalist's "living fossil
Living fossil
Living fossil is an informal term for any living species which appears similar to a species otherwise only known from fossils and which has no close living relatives, or a group of organisms which have long fossil records...
s", because a taxon cannot become globally extinct and reappear. If the original taxon went globally extinct, the new taxon must be an Elvis taxon
Elvis taxon
In paleontology, an Elvis taxon is a taxon which has been misidentified as having re-emerged in the fossil record after a period of presumed extinction, but is not actually a descendant of the original taxon, instead having developed a similar morphology through convergent evolution...
. On the other hand, all species "correctly considered living fossils" (with all conditions fulfilled, living and found through a considerable part of the geologic timescale) cannot be Lazarus taxa.

Animals that are Lazarus taxa are often cited by Cryptozoologists
Cryptozoology
Cryptozoology refers to the search for animals whose existence has not been proven...
as former Cryptids.