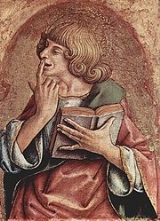 Overview
The Gospel According to John (Greek
Greek language
Greek is an independent branch of the Indo-European family of languages. Native to the southern Balkans, it has the longest documented history of any Indo-European language, spanning 34 centuries of written records. Its writing system has been the Greek alphabet for the majority of its history;...
τὸ κατὰ Ἰωάννην εὐαγγέλιον), commonly referred to as the Gospel of John or simply John, and often referred to in New Testament scholarship as the Fourth Gospel, is an account of the public ministry
Ministry of Jesus
In the Christian gospels, the Ministry of Jesus begins with his Baptism in the countryside of Judea, near the River Jordan and ends in Jerusalem, following the Last Supper with his disciples. The Gospel of Luke states that Jesus was "about 30 years of age" at the start of his ministry...
of Jesus
Jesus
Jesus of Nazareth , commonly referred to as Jesus Christ or simply as Jesus or Christ, is the central figure of Christianity...
. It begins with the witness and affirmation by John the Baptist
John the Baptist
John the Baptist was an itinerant preacher and a major religious figure mentioned in the Canonical gospels. He is described in the Gospel of Luke as a relative of Jesus, who led a movement of baptism at the Jordan River...
and concludes with the death, burial, Resurrection
Resurrection of Jesus
The Christian belief in the resurrection of Jesus states that Jesus returned to bodily life on the third day following his death by crucifixion. It is a key element of Christian faith and theology and part of the Nicene Creed: "On the third day he rose again in fulfillment of the Scriptures"...
, and post-Resurrection appearances
Resurrection appearances of Jesus
The major Resurrection appearances of Jesus in the Canonical gospels are reported to have occurred after his death, burial and resurrection, but prior to his Ascension. Among these primary sources, most scholars believe First Corinthians was written first, authored by Paul of Tarsus along with...
of Jesus. This account is fourth of the canonical gospels, after the synoptics Matthew
Gospel of Matthew
The Gospel According to Matthew is one of the four canonical gospels, one of the three synoptic gospels, and the first book of the New Testament. It tells of the life, ministry, death, and resurrection of Jesus of Nazareth...
, Mark
Gospel of Mark
The Gospel According to Mark , commonly shortened to the Gospel of Mark or simply Mark, is the second book of the New Testament. This canonical account of the life of Jesus of Nazareth is one of the three synoptic gospels. It was thought to be an epitome, which accounts for its place as the second...
and Luke
Gospel of Luke
The Gospel According to Luke , commonly shortened to the Gospel of Luke or simply Luke, is the third and longest of the four canonical Gospels. This synoptic gospel is an account of the life and ministry of Jesus of Nazareth. It details his story from the events of his birth to his Ascension.The...
.

The Gospel's authorship is anonymous.

John does not name the blelslsed mother Virgin Mary, but instead refers to her by the title The Mother of Jesus. How does this reflect Filial respect?

Who were the two disiples with John when he was baptising?
More
x