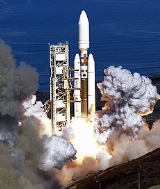 Encyclopedia
Space Launch Complex 4 was a launch site at Vandenberg Air Force Base
Vandenberg Air Force Base
Vandenberg Air Force Base is a United States Air Force Base, located approximately northwest of Lompoc, California. It is under the jurisdiction of the 30th Space Wing, Air Force Space Command ....
, used by Atlas and Titan rockets between 1963 and 2005. It consisted of two separate launch pads, SLC-4W and SLC-4E, which were formerly designated PALC2-3 and PALC2-4 respectively. Both pads were originally built for use by Atlas-Agena
Atlas-Agena
The Atlas-Agena was an American expendable launch system derived from the SM-65 Atlas missile. It was a member of the Atlas family of rockets, and was used for 119 orbital launches between 1960 and 1978....
rockets, but were later rebuilt to handle Titan rockets. The designation SLC-4 was applied at the time of the conversion to launch Titans.

Space Launch Complex 4E will be redeveloped and used by SpaceX
SpaceX
Space Exploration Technologies Corporation, or more popularly and informally known as SpaceX, is an American space transport company that operates out of Hawthorne, California...
as a launch site for the Falcon 9
Falcon 9
Falcon 9 is a rocket-powered spaceflight launch system designed and manufactured by SpaceX. Both stages of its two-stage-to-orbit vehicle use liquid oxygen and rocket-grade kerosene propellants...
rocket. The first launch is scheduled for summer 2012. , ground breaking has begun.

The first launch to use what is now SLC-4 occurred on 12 July 1963, when an Atlas-Agena D launched the first KH-7
KH-7
Codenamed Gambit, the KH-7 was a reconnaissance satellite used by the United States from July 1963 to June 1967. Like the older CORONA system, it acquired imagery intelligence by taking photographs and returning the undeveloped film to earth. It achieved a typical ground-resolution of to...
reconnaissance satellite, from PALC2-3. Twelve Atlas-Agenas launches were conducted from PALC2-3, with the last occurring on 12 March 1965.

Following this, it was rebuilt as SLC-4W, a Titan launch complex. The first Titan launch from SLC-4W was a Titan IIIB, on 29 July 1966. All 70 Titan IIIB launches occurred from SLC-4W, with the last on 12 February 1987. Subsequent to the retirement of the Titan IIIB, it became a Titan 23G
Titan 23G
The Titan 23G, Titan IIG, Titan 2G or Titan II SLV was an American expendable launch system derived from the LGM-25C Titan II intercontinental ballistic missile. Retired Titan II missiles were converted by Martin Marietta, into which the Glenn L. Martin Company, which built the original Titan II,...
launch site, and twelve Titan II launches, using the 23G orbital configuration, were conducted between 5 September 1988 and 18 October 2003. Following the retirement of the Titan 23G, SLC-4W was deactivated. 93 rockets were launched from SLC-4W.

SLC-4W was the site of the launch of Clementine, the only spacecraft to be launched from Vandenberg to the Moon
Moon
The Moon is Earth's only known natural satellite,There are a number of near-Earth asteroids including 3753 Cruithne that are co-orbital with Earth: their orbits bring them close to Earth for periods of time but then alter in the long term . These are quasi-satellites and not true moons. For more...
, which was launched by a Titan 23G on 25 January 1994.

The first launch from PALC2-4 occurred on 14 August 1964, when a KH-7 satellite was launched by an Atlas-Agena D
Atlas-Agena
The Atlas-Agena was an American expendable launch system derived from the SM-65 Atlas missile. It was a member of the Atlas family of rockets, and was used for 119 orbital launches between 1960 and 1978....
. After 27 Atlas-Agena launches, the last of which was on 4 June 1967, the complex was deactivated.

In 1971, it was reactivated as a Titan IIID
Titan III
The Titan IIIC was a space booster used by the United States Air Force. It was launched from Cape Canaveral Air Force Station, FL., and Vandenberg Air Force Base, CA. It was planned to be used as a launch vehicle in the cancelled Dyna-Soar and Manned Orbiting Laboratory programs...
launch site, designated SLC-4E, with the first launch occurring on 15 June. 22 Titan IIIDs were launched, until 17 November 1982, when the type was replaced by the Titan 34D
Titan 34D
The Titan 34D was an American rocket, used to launch a number of satellites for mostly military applications. After its retirement from military service, a small number were converted to the Commercial Titan III configuration, which included a stretched second stage, and a larger fairing...
. Seven 34Ds were launched between 20 June 1983, and 6 November 1988.
On 18 April 1986, a Titan 34D exploded less than nine seconds after launch, showering debris over the launch pad.

The last type to use the complex was the Titan IV
Titan IV
The Titan IV family of space boosters were used by the U.S. Air Force. They were launched from Cape Canaveral Air Force Station, Florida, and Vandenberg Air Force Base, California. At the time of its introduction, the Titan IV was the "largest unmanned space booster used by the Air Force."The...
, starting on 8 March 1991, with the launch of Lacrosse 2. On 19 October 2005, the last flight of a Titan rocket occurred, when a Titan IVB was launched from SLC-4E, with an Improved Crystal satellite. Following this launch, the complex was deactivated, having been used for 68 launches.

SpaceX
SpaceX
Space Exploration Technologies Corporation, or more popularly and informally known as SpaceX, is an American space transport company that operates out of Hawthorne, California...
will reactivate SLC–4E for Falcon Heavy
Falcon Heavy
Falcon Heavy, previously known as the Falcon 9 Heavy, is a spaceflight launch system that uses rocket engines currently being designed and manufactured by SpaceX. Both stages of the two-stage-to-orbit vehicles use liquid oxygen and rocket-grade kerosene propellants...
launches following a 24 month refurbishment due to start during 2011. The draft environmental impact assessment
Environmental impact assessment
An environmental impact assessment is an assessment of the possible positive or negative impact that a proposed project may have on the environment, together consisting of the natural, social and economic aspects....
with a finding of "no significant impact" was published in February 2011. As of August, demolition work is underway on the pad's fixed and mobile service towers, with most of the fixed tower removed and the hammerhead crane removed from the mobile service tower.

At a press conference at the National Press Club in Washington, DC. on 5 April 2011, Elon Musk
Elon Musk
Elon Musk is an American engineer and entrepreneur heritage best known for co-founding PayPal, SpaceX and Tesla Motors. He is currently the CEO and CTO of SpaceX, CEO and Product Architect of Tesla Motors and Chairman of SolarCity...
stated, "Falcon Heavy will arrive at our Vandenberg, California, launch complex by the end of next year, with liftoff to follow soon thereafter. First launch from our Cape Canaveral launch complex is planned for late 2013 or 2014."
The source of this article is wikipedia, the free encyclopedia.  The text of this article is licensed under the GFDL.