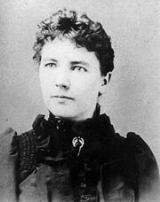 Overview
Laura Elizabeth Ingalls Wilder (February 7, 1867 – February 10, 1957) was an American author who wrote the Little House series
Little House on the Prairie
Little House is a series of children's books by Laura Ingalls Wilder that was published originally between 1932 and 1943, with four additional books published posthumously, in 1962, 1971, 1974 and 2006.-History:...
of books based on her childhood in a pioneer
Settler
A settler is a person who has migrated to an area and established permanent residence there, often to colonize the area. Settlers are generally people who take up residence on land and cultivate it, as opposed to nomads...
family. Laura's daughter, Rose, inspired Laura to write her books.
Laura Elizabeth Ingalls was born February 7, 1867, seven miles north the village of Pepin
Pepin, Wisconsin
Pepin is a village in Pepin County, Wisconsin, United States. The population was 837 at the 2010 census. The village is located within the Town of Pepin.-History:...
, in the "Big Woods" of Wisconsin, to Charles Phillip Ingalls
Charles Ingalls
Charles Phillip Ingalls was the father of Laura Ingalls Wilder, known for her Little House on the Prairie series of books...
and Caroline Lake (Quiner) Ingalls
Caroline Ingalls
Caroline Ingalls, born Caroline Lake Quiner was the mother of Laura Ingalls Wilder, author of the Little House books.-Biography:...
. She was the second of five children; her siblings were Mary Amelia
Mary Ingalls
Mary Amelia Ingalls was born near the town of Pepin, Wisconsin. She was the first child of Caroline and Charles Ingalls...
, who went blind; Caroline Celestia
Carrie Ingalls
Caroline Celestia "Carrie" Ingalls Swanzey was the third child of Charles and Caroline Ingalls, and was born in Montgomery County, Kansas...
, Charles Frederick, who died in infancy, and Grace Pearl
Grace Ingalls
Grace Pearl Ingalls Dow was the fifth and last child of Caroline and Charles Ingalls. She was the youngest sister of Laura Ingalls Wilder, known for her Little House on the Prairie books.-Biography:...
.

I disovered the Little House books as a child and tried to remember that they were fiction. I visited her home in Mansfield, MO summer 2009 and got th...
More

Royalties from Little House books and where they didn't go

Discrepancy between the first four years and these happy golden years

An Article I found