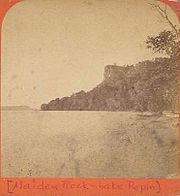 Princess Winona is the central Native American
Native Americans in the United States
Native Americans in the United States are the indigenous peoples in North America within the boundaries of the present-day continental United States, parts of Alaska, and the island state of Hawaii. They are composed of numerous, distinct tribes, states, and ethnic groups, many of which survive as...
character in a "Lover's Leap
Lover's Leap
Lovers' Leap , is a toponym given to a number of locations of varying height, usually isolated, with the risk of a fatal fall and the possibility of a deliberate jump...
" romantic legend set at Maiden Rock on the Wisconsin
Wisconsin
Wisconsin is a U.S. state located in the north-central United States and is part of the Midwest. It is bordered by Minnesota to the west, Iowa to the southwest, Illinois to the south, Lake Michigan to the east, Michigan to the northeast, and Lake Superior to the north. Wisconsin's capital is...
side of Lake Pepin
Lake Pepin
Lake Pepin is a naturally occurring lake, and the widest naturally occurring part of the Mississippi River, located approximately 60 miles downstream from Saint Paul, Minnesota. It is a widening of the river on the border between Minnesota and Wisconsin. The formation of the lake was caused by the...
in the United States
United States
The United States of America is a federal constitutional republic comprising fifty states and a federal district...
. Princess Winona leaps to her death from Maiden Rock rather than marry a suitor she does not love.

There are several variations of the story. Winona's father is sometimes said to be Chief Red Wing of what is now Red Wing, Minnesota
Red Wing, Minnesota
Red Wing is a city in Goodhue County, Minnesota, United States, on the Mississippi River. The population was 16,459 at the 2010 census. It is the county seat of Goodhue County....
or Chief Wabasha (Wapasha) of a village identified as Keoxa, now known as Winona, Minnesota
Winona, Minnesota
Winona is a city in and the county seat of Winona County, in the U.S. State of Minnesota. Located in picturesque bluff country on the Mississippi River, its most noticeable physical landmark is Sugar Loaf....
. Rather than marry a suitor she does not love, Winona chooses to leap from the cliff of Maiden Rock to her death. Who the suitor is depends on the version of the tale. Some versions featured him as a French
French people
The French are a nation that share a common French culture and speak the French language as a mother tongue. Historically, the French population are descended from peoples of Celtic, Latin and Germanic origin, and are today a mixture of several ethnic groups...
trapper; others say he is an Indian of another tribe.

In the traditional Dakota language
Dakota language
Dakota is a Siouan language spoken by the Dakota people of the Sioux tribes. Dakota is closely related to and mutually intelligible with the Lakota language.-Dialects:...
, "Winona" is not a personal name
Personal name
A personal name is the proper name identifying an individual person, and today usually comprises a given name bestowed at birth or at a young age plus a surname. It is nearly universal for a human to have a name; except in rare cases, for example feral children growing up in isolation, or infants...
but a general term for a first-born child of any class distinction who happens to be female.

The concept of the central figure as a "princess" is in keeping with a European-American stereotype about Native American "princesses." In fact, the Sioux
Sioux
The Sioux are Native American and First Nations people in North America. The term can refer to any ethnic group within the Great Sioux Nation or any of the nation's many language dialects...
do not have an equivalent title for "princess" in any of the major dialects.

Today "Winona" has become regularly used as a personal and place name throughout the United States. 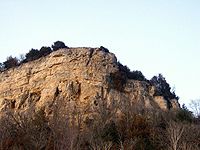 Winona, Minnesota is associated with the legend because it was formerly the site of Keoxa. The character of "Princess Winona" has entered popular regional culture. It has been featured in Watkins Incorporated
Watkins Incorporated
Watkins Incorporated is a manufacturer of health remedies, baking products, and other household items. The entire catalog includes 400 products. It is based in Winona, Minnesota, and largely relies on an independent sales force of 25,000 people to distribute its products...
advertising, a prominent statue (currently located by Huff St. between 5th and 6th Streets after being located in other city parks), a stained glass window, and elsewhere.

While the Upper Mississippi version of the legend is the most prominent, there are other sites with variations of this legend.

Mark Twain
Mark Twain
Samuel Langhorne Clemens , better known by his pen name Mark Twain, was an American author and humorist...
in Life on the Mississippi
Life on the Mississippi
Life on the Mississippi is a memoir by Mark Twain, of his days as a steamboat pilot on the Mississippi River before the American Civil War, and also a travel book, recounting his trip along the Mississippi many years after the War....
wrote: "There are fifty Lover's Leaps along the Mississippi from whose summit disappointed Indian girls have jumped." Other locations with a similar legend include Winona Falls in Pennsylvania
Pennsylvania
The Commonwealth of Pennsylvania is a U.S. state that is located in the Northeastern and Mid-Atlantic regions of the United States. The state borders Delaware and Maryland to the south, West Virginia to the southwest, Ohio to the west, New York and Ontario, Canada, to the north, and New Jersey to...
, Camden County, Missouri
Camden County, Missouri
Camden County is a county located in the U.S. state of Missouri. As of 2000, the population was 37,051. Its county seat is Camdenton. The county was organized in 1841 as Kinderhook County and renamed in 1843, for Charles Pratt, 1st Earl Camden, Chancellor of England, and leader of the Whig...
and Cameron Park in Waco, Texas
Waco, Texas
Waco is a city in and the county seat of McLennan County, Texas. Situated along the Brazos River and on the I-35 corridor, halfway between Dallas and Austin, it is the economic, cultural, and academic center of the 'Heart of Texas' region....
.

The Wenonah Fountain is located in downtown Winona, Minnesota at Windom Park, named after the Politician William Windom
William Windom
This page is about the former United States politician. William Windom was an American politician from Minnesota. He served as U.S. Representative from 1859 to 1869, and as U.S. Senator from 1870 to January 1871, from March 1871 to March 1881, and from November 1881 to 1883...
, and was donated by William J. Landon in memory of his wife Ida Cone Landon in 1900.