Encyclopedia
Al-Kūt is a city in eastern Iraq
Iraq
Iraq ; officially the Republic of Iraq is a country in Western Asia spanning most of the northwestern end of the Zagros mountain range, the eastern part of the Syrian Desert and the northern part of the Arabian Desert....
, on the left bank of the Tigris River, about 160 kilometres (100 mi) south east of Baghdad
Baghdad
Baghdad is the capital of Iraq, as well as the coterminous Baghdad Governorate. The population of Baghdad in 2011 is approximately 7,216,040...
. the estimated population is about 374,000 people. It is the capital of the province long known as Al Kut, but since the 1960s renamed Wasit.

The old town of Kut is within a sharp "U" bend of the river, almost making it an island but for a narrow connection to the shore. For centuries Kut was a regional center of the carpet
Carpet
A carpet is a textile floor covering consisting of an upper layer of "pile" attached to a backing. The pile is generally either made from wool or a manmade fibre such as polypropylene,nylon or polyester and usually consists of twisted tufts which are often heat-treated to maintain their...
trade. The area around Kut is a fertile cereal grain
Cereal
Cereals are grasses cultivated for the edible components of their grain , composed of the endosperm, germ, and bran...
growing region. The Kut Barrage
Kut Barrage
The Kut Barrage is a barrage on the Tigris river, located in the modern town of Kut in Wasit Governorate, Iraq. It is long, high and consists of 56 gates, each wide. The maximum discharge of the barrage is , but actual discharge has not exceeded in the last 10 years. The barrage supports a road...
was constructed in the city in the 1930s to provide irrigation water for the surrounding area. The Baghdad Nuclear Research Facility
Baghdad Nuclear Research Facility
The Baghdad Nuclear Research Facility adjacent to the Tuwaitha "Yellow Cake Factory" contains the remains of nuclear reactors bombed by Israel in 1981 and the United States in 1991. It was used as a storage facility for spent reactor fuel and industrial and medical wastes. The radioactive material...
, looted following the 2003 invasion of Iraq
2003 invasion of Iraq
The 2003 invasion of Iraq , was the start of the conflict known as the Iraq War, or Operation Iraqi Freedom, in which a combined force of troops from the United States, the United Kingdom, Australia and Poland invaded Iraq and toppled the regime of Saddam Hussein in 21 days of major combat operations...
, is located near Kut.


The siege of Kut 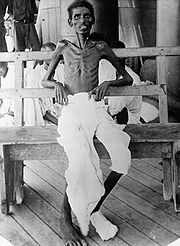 Al-Kut was the scene of fierce battle during World War I
World War I
World War I , which was predominantly called the World War or the Great War from its occurrence until 1939, and the First World War or World War I thereafter, was a major war centred in Europe that began on 28 July 1914 and lasted until 11 November 1918...
. The British
United Kingdom
The United Kingdom of Great Britain and Northern IrelandIn the United Kingdom and Dependencies, other languages have been officially recognised as legitimate autochthonous languages under the European Charter for Regional or Minority Languages...
Mesopotamian Expeditionary Force, led by General Townshend
Charles Vere Ferrers Townshend
Major General Sir Charles Vere Ferrers Townshend KCB, DSO was a British Indian Army officer who led the ultimately disastrous first British Expedition against Baghdad during World War I, and was later elected to Parliament....
, marched north from Basra
Basra
Basra is the capital of Basra Governorate, in southern Iraq near Kuwait and Iran. It had an estimated population of two million as of 2009...
in September 1915 in what became known as the Mesopotamian Campaign
Mesopotamian Campaign
The Mesopotamian campaign was a campaign in the Middle Eastern theatre of World War I fought between the Allies represented by the British Empire, mostly troops from the Indian Empire, and the Central Powers, mostly of the Ottoman Empire.- Background :...
. They reached Al-kut on September 26, where after three days of fighting they drove the Ottoman
Ottoman Empire
The Ottoman EmpireIt was usually referred to as the "Ottoman Empire", the "Turkish Empire", the "Ottoman Caliphate" or more commonly "Turkey" by its contemporaries...
forces from the town.

After a halt of nearly 9 months, Townshend then headed up river to Ctesiphon
Ctesiphon
Ctesiphon, the imperial capital of the Parthian Arsacids and of the Persian Sassanids, was one of the great cities of ancient Mesopotamia.The ruins of the city are located on the east bank of the Tigris, across the river from the Hellenistic city of Seleucia...
. Following a battle
Battle of Ctesiphon (1915)
The Battle of Ctesiphon was fought in November 1915 by the British Empire and British India, against the Ottoman Empire, within the Mesopotamian Campaign of World War I....
there, the British forces withdrew back to Kut. On December 7, 1915, the Turks
Turkey
Turkey , known officially as the Republic of Turkey , is a Eurasian country located in Western Asia and in East Thrace in Southeastern Europe...
, under their commander, the German Field Marshal Baron von der Goltz
Colmar Freiherr von der Goltz
Wilhelm Leopold Colmar Freiherr von der Goltz also known as Goltz Pasha, was a Prussian Field Marshal and military writer.-Military career:...
, arrived at Kut and began a siege
Siege
A siege is a military blockade of a city or fortress with the intent of conquering by attrition or assault. The term derives from sedere, Latin for "to sit". Generally speaking, siege warfare is a form of constant, low intensity conflict characterized by one party holding a strong, static...
. The British cavalry under Colonel Gerard Leachman
Gerard Leachman
Brevet Lieut.-Colonel Gerard Evelyn Leachman CIE DSO , was a British soldier and intelligence officer who travelled extensively in Arabia.Leachman was commissioned into the Royal Sussex Regiment and served in India and in the Boer War...
succeeded in breaking out, but Townshend and the bulk of the force remained besieged. Many attempts were made to relieve Townshend's forces, but all were defeated. Some 23,000 British and Indian soldiers died in the attempts to retake Kut, probably the worst loss of life for the British away from the European theater. Near the end of the siege, T. E. Lawrence
T. E. Lawrence
Lieutenant Colonel Thomas Edward Lawrence, CB, DSO , known professionally as T. E. Lawrence, was a British Army officer renowned especially for his liaison role during the Arab Revolt against Ottoman Turkish rule of 1916–18...
and Aubrey Herbert
Aubrey Herbert
Aubrey Nigel Henry Molyneux Herbert was a British diplomat, traveller and intelligence officer associated with Albanian independence. Twice he was offered the throne of Albania...
of British Intelligence unsuccessfully tried to bribe Khalil Pasha to allow the troops to escape.

Townshend, with some 8,000 surviving soldiers, finally surrendered Kut on April 29, 1916. The captured soldiers were divided, where the officers were sent to separate facilities, and many of the enlisted soldiers were impressed into hard labour until the surrender of the Ottoman Empire; more than half of them died. The British went back on the offensive in December 1916 with a larger and better-supplied force under General Sir Frederick Stanley Maude
Frederick Stanley Maude
Lieutenant General Sir Frederick Stanley Maude KCB, CMG, DSO was a British commander, most famous for his efforts in Mesopotamia during World War I and for conquering Baghdad in 1917.-Family:...
and reconquered Kut on February 23, 1917.

Contingency Operating Base (COB) Delta is an American military installation located on the right bank of the Tigris directly across from Kut. The COB is centered on a former Iraqi Air Force base.