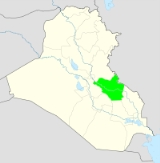 Encyclopedia
Wasit Governorate (or Wasit Province) is a province
Governorates of Iraq
||Iraq is composed of 18 provinces :#Baghdād #Salāh ad-Dīn #Diyālā #Wāsit #Maysān #Al-Basrah #Dhī Qār #Al-Muthannā #Al-Qādisiyyah...
in eastern Iraq
Iraq
Iraq ; officially the Republic of Iraq is a country in Western Asia spanning most of the northwestern end of the Zagros mountain range, the eastern part of the Syrian Desert and the northern part of the Arabian Desert....
. Its name comes from the Arabic word meaning "middle," as it lies along the Tigris
Tigris
The Tigris River is the eastern member of the two great rivers that define Mesopotamia, the other being the Euphrates. The river flows south from the mountains of southeastern Turkey through Iraq.-Geography:...
about midway between Baghdad
Baghdad
Baghdad is the capital of Iraq, as well as the coterminous Baghdad Governorate. The population of Baghdad in 2011 is approximately 7,216,040...
and Basra
Basra
Basra is the capital of Basra Governorate, in southern Iraq near Kuwait and Iran. It had an estimated population of two million as of 2009...
. Its major cities include the capital Al Kut, Al-Hai, and the city Wasit. Prior to 1976 it was known as Kut Province.