Encyclopedia
The Kooikerhondje or Kooiker Hound, is a small spaniel
Spaniel
A spaniel is a type of gun dog. It is assumed spaniels originated from Spain as the word spaniel may be derived from Hispania or possibly from the French phrase "Chiens de l’Espagnol" . Spaniels were especially bred to flush game out of dense brush. By the late 17th century spaniels had become...
-type breed of dog
Dog
The domestic dog is a domesticated form of the gray wolf, a member of the Canidae family of the order Carnivora. The term is used for both feral and pet varieties. The dog may have been the first animal to be domesticated, and has been the most widely kept working, hunting, and companion animal in...
of Dutch
Netherlands
The Netherlands is a constituent country of the Kingdom of the Netherlands, located mainly in North-West Europe and with several islands in the Caribbean. Mainland Netherlands borders the North Sea to the north and west, Belgium to the south, and Germany to the east, and shares maritime borders...
ancestry that was originally used as a working dog
Working dog
A working dog refers to a canine working animal, i.e., a type of dog that is not merely a pet but learns and performs tasks to assist and/or entertain its human companions, or a breed of such origin...
, particularly in duck
Duck
Duck is the common name for a large number of species in the Anatidae family of birds, which also includes swans and geese. The ducks are divided among several subfamilies in the Anatidae family; they do not represent a monophyletic group but a form taxon, since swans and geese are not considered...
hunting
Hunting
Hunting is the practice of pursuing any living thing, usually wildlife, for food, recreation, or trade. In present-day use, the term refers to lawful hunting, as distinguished from poaching, which is the killing, trapping or capture of the hunted species contrary to applicable law...
and tolling. Kooikers were popular in the 17th and 18th century and appeared in the paintings of Rembrandt and Jan Steen
Jan Steen
Jan Havickszoon Steen was a Dutch genre painter of the 17th century . Psychological insight, sense of humour and abundance of colour are marks of his trade.-Life:...
. The breed is rapidly gaining popularity in the United States
United States
The United States of America is a federal constitutional republic comprising fifty states and a federal district...
, Canada
Canada
Canada is a North American country consisting of ten provinces and three territories. Located in the northern part of the continent, it extends from the Atlantic Ocean in the east to the Pacific Ocean in the west, and northward into the Arctic Ocean...
and Scandinavia
Scandinavia
Scandinavia is a cultural, historical and ethno-linguistic region in northern Europe that includes the three kingdoms of Denmark, Norway and Sweden, characterized by their common ethno-cultural heritage and language. Modern Norway and Sweden proper are situated on the Scandinavian Peninsula,...
, where it is still relatively unknown. 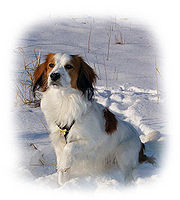 These dogs are around 35 to 40 cm (14 to 16 inches) high at the withers
Withers
The withers is the ridge between the shoulder blades of a four-legged animal. In many species it is the tallest point of the body, and in horses and dogs it is the standard place to measure the animal's height .-Horses:The withers in horses are formed by the dorsal spinal processes of roughly the...
with a nearly square body that is slightly longer than their height at the shoulders. Depending on the gender and the size a Kooikerhondje is not supposed to weigh more than 9-11 kilograms. They have medium long, hanging ear
Ear
The ear is the organ that detects sound. It not only receives sound, but also aids in balance and body position. The ear is part of the auditory system....
s with wispy tips, known as earrings , that are set close to the head and they have long, feathered tails with a white plume. The breed has a waterproof, medium long coat that doesn't hold much dirt and is easily cleaned by a simple brushing.
They have shiny bicoloured coats, often predominantly white with orange-red plates. The fur is medium long and either slightly wavy or straight. For conformation show
Conformation show
Conformation shows, also referred to as breed shows, are a kind of dog show in which a judge familiar with a specific dog breed evaluates individual purebred dogs for how well the dogs conform to the established breed type for their breed, as described in a breed's individual breed standard.A...
ing, dogs with black ear tips and white tails are preferred.

Cheerful, good natured, friendly, quiet, well-behaved, and alert; those are terms that are used to describe the Kooikerhondje. It is dependent on its domestic environment, kind, happy and lively. They are also intelligent, attentive and more than willing to please their owner. The Kooikerhondje adapts to situations rather quickly, changing his behavior from quiet to lively when the situation allows him to be. He will not always immediately like strangers, instead choosing to retreat. But once he warms up to someone, the trust will be there for the rest of his life.

Kooikers have good appetites and a tendency to put on weight easily. They have a relatively small genetic base, so hereditary diseases were earlier somewhat prevalent. These include:

Today (due to a lot of hard work in the national clubs) most Kooikers used for breeding are free from von Willebrands disease (most national clubs require both male and female dogs to be free from this disease to be allowed to breed).
Patellar luxation is no major problem in most countries at the moment, but is kept under a close watch to prevent it from becoming a problem again. In the Netherlands, eye tests are available and all breeders breeding according to the breed club's rules have to test their dogs. Only dogs that are free of eye diseases are allowed to be used for breeding.

The Kooikerhondje was developed in the Netherlands around the sixteenth century to be a tolling breed. They were used to lure and drive ducks into 'kooien' (cages
Cage (enclosure)
A cage is an enclosure made of mesh, bars or wires, used to confine, contain or protect something or someone. A cage can serve many purposes, including keeping an animal in captivity, capturing, and being used for display of an animal at a zoo.-History:...
in the form of canals with traps at the ends), where the hunter (the so called Kooiker) could easily catch the fowl. The dogs that were used by the Kooiker for this kind of hunting technique, were referred to as the 'Kooiker's hondjes' (literally: Kooiker's dogs). Eventually this led to this dog being called Kooikerhondje.

The breed almost became extinct after World War II
World War II
World War II, or the Second World War , was a global conflict lasting from 1939 to 1945, involving most of the world's nations—including all of the great powers—eventually forming two opposing military alliances: the Allies and the Axis...
until Baroness van Hardenbroek van Ammerstol rescued it. The breed was only officially recognized by the Raad van Beheer, the Dutch Kennel Club, in 1971 and has since been imported into other countries and recognised officially. The breed is still relatively unknown in North America and not yet recognized as a breed in the USA
United States
The United States of America is a federal constitutional republic comprising fifty states and a federal district...
or Canada
Canada
Canada is a North American country consisting of ten provinces and three territories. Located in the northern part of the continent, it extends from the Atlantic Ocean in the east to the Pacific Ocean in the west, and northward into the Arctic Ocean...
, although it has been accepted into the AKC
American Kennel Club
The American Kennel Club is a registry of purebred dog pedigrees in the United States. Beyond maintaining its pedigree registry, this kennel club also promotes and sanctions events for purebred dogs, including the Westminster Kennel Club Dog Show, an annual event which predates the official...
's FSS program and is assigned into the Sporting Group. In the United States, both the UKC
United Kennel Club
The United Kennel Club is the second oldest all-breed registry of purebred dog pedigrees in the United States and the second largest in the world. According to the website, the club records 250,000 registrations annually. The UKC is not part of the International Canine Organisation, Fédération...
and ARBA
American Rare Breed Association
The American Rare Breed Association or ARBA is a national dog association of the United States, based in Cheltenham, Prince George's County, Maryland. The club was formed to register, show, educate and promote the breeding of uncommon dog breeds...
recognize the breed.

In the UK
United Kingdom
The United Kingdom of Great Britain and Northern IrelandIn the United Kingdom and Dependencies, other languages have been officially recognised as legitimate autochthonous languages under the European Charter for Regional or Minority Languages...
, the breed has been removed from the import list and is now eligible to enter Crufts
Crufts
Crufts is an annual international Championship conformation show for dogs organised and hosted by the Kennel Club, currently held every March at the National Exhibition Centre in Birmingham, England. It is the largest annual dog show in the world, as declared by Guinness World Records, and lasts...
for the Best in Show award, despite there being only 76 of the breed in the UK.