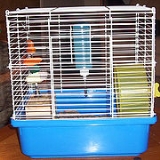 A cage is an enclosure
Enclosure
Enclosure or inclosure is the process which ends traditional rights such as mowing meadows for hay, or grazing livestock on common land. Once enclosed, these uses of the land become restricted to the owner, and it ceases to be common land. In England and Wales the term is also used for the...
made of mesh
Mesh
Mesh consists of semi-permeable barrier made of connected strands of metal, fiber, or other flexible/ductile material. Mesh is similar to web or net in that it has many attached or woven strands.-Types of mesh:...
, bars
Rod (geometry)
In geometry, a rod is a three-dimensional, solid cylinder....
or wire
Wire
A wire is a single, usually cylindrical, flexible strand or rod of metal. Wires are used to bear mechanical loads and to carry electricity and telecommunications signals. Wire is commonly formed by drawing the metal through a hole in a die or draw plate. Standard sizes are determined by various...
s, used to confine, contain or protect something or someone. A cage can serve many purposes, including keeping an animal in captivity
Captivity
Captivity or Captive may refer to:*Imprisonment or hostage, the state of being confined to a space from which it is difficult or impossible to escape**Captive company...
, capturing, and being used for display of an animal at a zoo
Zoo
A zoological garden, zoological park, menagerie, or zoo is a facility in which animals are confined within enclosures, displayed to the public, and in which they may also be bred....
.

Cages have been usually been used to capture or trap
Trap (tactic)
A trap is a device intended to catch an intruder or prey. "Trap" may also refer to the tactic of catching or harming an adversary. Conversely it may also mean a hindrance for change, being caught in a trap.-Device:*Animal trapping*Bird trapping...
a certain life form. For this reason, they've been known as a hunting
Hunting
Hunting is the practice of pursuing any living thing, usually wildlife, for food, recreation, or trade. In present-day use, the term refers to lawful hunting, as distinguished from poaching, which is the killing, trapping or capture of the hunted species contrary to applicable law...
accessory, often used for poaching animals or simply seizing them.

Cages are often used now as a source to confine
Confine
Confine is a village located in San Marino. It belongs to the municipality of Chiesanuova. Its name, in Italian language, means "border".-Geography:...
animals. These provide as a habitat to the animal, and since they've advanced so greatly, they are now specially designed to fit that species of animal. Captive Breed
Breed
A breed is a group of domestic animals or plants with a homogeneous appearance, behavior, and other characteristics that distinguish it from other animals or plants of the same species. Despite the centrality of the idea of "breeds" to animal husbandry, there is no scientifically accepted...
s of bird
Bird
Birds are feathered, winged, bipedal, endothermic , egg-laying, vertebrate animals. Around 10,000 living species and 188 families makes them the most speciose class of tetrapod vertebrates. They inhabit ecosystems across the globe, from the Arctic to the Antarctic. Extant birds range in size from...
s, rodents, reptiles, and even larger animals have also been known to be confined in a cage as a domesticated animal (also known as a pet
Pet
A pet is a household animal kept for companionship and a person's enjoyment, as opposed to wild animals or to livestock, laboratory animals, working animals or sport animals, which are kept for economic or productive reasons. The most popular pets are noted for their loyal or playful...
). Captivity is a common purpose of the cage.

Cages also serve a purpose as a hunting tool, often used to seize
Seize
Seize may refer to:*Seisin, legal possession*Seizing, a class of knots used to semi-permanently bind together two ropes*Seize , a British electronic band*The jamming of machine parts against each other, usually due to insufficient lubrication...
an animal. This is a common and illegal purpose of the cage, as poaching is illegal itself. These type of cages are used to trap an animal, or hold them for a certain period of time. President Theodore Roosevelt used a cage himself to capture a bear
Bear
Bears are mammals of the family Ursidae. Bears are classified as caniforms, or doglike carnivorans, with the pinnipeds being their closest living relatives. Although there are only eight living species of bear, they are widespread, appearing in a wide variety of habitats throughout the Northern...
, as the cage serves a purpose for capturing large animals.