Encyclopedia
The Kingdom of Portugal was Portugal
Portugal
Portugal , officially the Portuguese Republic is a country situated in southwestern Europe on the Iberian Peninsula. Portugal is the westernmost country of Europe, and is bordered by the Atlantic Ocean to the West and South and by Spain to the North and East. The Atlantic archipelagos of the...
's general designation under the monarchy. The kingdom was located in the west of the Iberian Peninsula
Iberian Peninsula
The Iberian Peninsula , sometimes called Iberia, is located in the extreme southwest of Europe and includes the modern-day sovereign states of Spain, Portugal and Andorra, as well as the British Overseas Territory of Gibraltar...
, Europe
Europe
Europe is, by convention, one of the world's seven continents. Comprising the westernmost peninsula of Eurasia, Europe is generally 'divided' from Asia to its east by the watershed divides of the Ural and Caucasus Mountains, the Ural River, the Caspian and Black Seas, and the waterways connecting...
and existed from 1139 to 1910. It was replaced by the Portuguese First Republic
Portuguese First Republic
The Portuguese First Republic spans a complex 16 year period in the history of Portugal, between the end of the period of constitutional monarchy marked by the 5 October 1910 revolution and the 28 May coup d'état of 1926...
after the Lisbon Regicide
Lisbon Regicide
The Lisbon Regicide was the name given for the assassinations of King Carlos I of Portugal and his heir, Luis Filipe, the Prince Royal by assassins sympathetic to republican interests...
(1908) and ultimately, the 5 October 1910 revolution
5 October 1910 revolution
The revolution of 1910 was a republican coup d'état that occurred in Portugal on 5 October 1910, which deposed King Manuel II and established the Portuguese First Republic....
.

The Second County of Portugal (1093–1139), successor to the First County of Portugal (868–1071), became a kingdom
Monarchy
A monarchy is a form of government in which the office of head of state is usually held until death or abdication and is often hereditary and includes a royal house. In some cases, the monarch is elected...
on 26 July 1139 when Afonso I
Afonso I of Portugal
Afonso I or Dom Afonso Henriques , more commonly known as Afonso Henriques , nicknamed "the Conqueror" , "the Founder" or "the Great" by the Portuguese, and El-Bortukali and Ibn-Arrik by the Moors whom he fought, was the first King of Portugal...
was proclaimed king
King
- Centers of population :* King, Ontario, CanadaIn USA:* King, Indiana* King, North Carolina* King, Lincoln County, Wisconsin* King, Waupaca County, Wisconsin* King County, Washington- Moving-image works :Television:...
of Portugal
Portugal
Portugal , officially the Portuguese Republic is a country situated in southwestern Europe on the Iberian Peninsula. Portugal is the westernmost country of Europe, and is bordered by the Atlantic Ocean to the West and South and by Spain to the North and East. The Atlantic archipelagos of the...
.

In 1908, King Carlos I of Portugal was killed in a regicide
Regicide
The broad definition of regicide is the deliberate killing of a monarch, or the person responsible for the killing of a monarch. In a narrower sense, in the British tradition, it refers to the judicial execution of a king after a trial...
at Lisbon
Lisbon
Lisbon is the capital city and largest city of Portugal with a population of 545,245 within its administrative limits on a land area of . The urban area of Lisbon extends beyond the administrative city limits with a population of 3 million on an area of , making it the 9th most populous urban...
. The Portuguese monarchy lasted until 5 October 1910, when through a revolution, it was overthrown and Portugal was proclaimed a republic
Republic
A republic is a form of government in which the people, or some significant portion of them, have supreme control over the government and where offices of state are elected or chosen by elected people. In modern times, a common simplified definition of a republic is a government where the head of...
. The overthrow of the Portuguese monarchy in 1910 led to a 16 year struggle to sustain parliamentary democracy under republicanism.

Through the times, the Kingdom of Portugal built what was known as the Portuguese Empire
Portuguese Empire
The Portuguese Empire , also known as the Portuguese Overseas Empire or the Portuguese Colonial Empire , was the first global empire in history...
since 1415, traditionally referring to its vast colonies, the largest of which was Brazil
Colonial Brazil
In the history of Brazil, Colonial Brazil, officially the Viceroyalty of Brazil comprises the period from 1500, with the arrival of the Portuguese, until 1815, when Brazil was elevated to kingdom alongside Portugal as the United Kingdom of Portugal, Brazil and the Algarves.During the over 300 years...
(established in 1500 and an independent country since 1822). The remaining empire passed under control of the Portuguese Republic until the late 20th century, when the last overseas territories of Portugal were handed over (most notably Portuguese Africa, which included the overseas provinces of Angola and Mozambique, in 1975, and finally Macau
Macau
Macau , also spelled Macao , is, along with Hong Kong, one of the two special administrative regions of the People's Republic of China...
in 1999).


|- style="background:lavender;"
|align=center| 4 || Sancho II
Sancho II of Portugal
Sancho II , nicknamed "the Pious" and "the Caped" or "the Capuched" , , fourth King of Portugal, was the eldest son of Afonso II of Portugal by his wife, Infanta Urraca of Castile...

Alphonso or Alphonse III (English),
Affonso III (Old Portuguese),
|| the Bolognian (o Bolonhês) || brother of Sancho II
younger son of Afonso II
|- style="background:lavender;"
|align=center| 6 || Dinis
Denis of Portugal
Dinis , called the Farmer King , was the sixth King of Portugal and the Algarve. The eldest son of Afonso III of Portugal by his second wife, Beatrice of Castile and grandson of king Alfonso X of Castile , Dinis succeeded his father in 1279.-Biography:As heir to the throne, Infante Dinis was...

|| 16 February 1279 || 7 January 1325 ||
Denis (English) or
Diniz (Old Portuguese) || the Farmer (o Lavrador)
the Poet-King (o Rei-Poeta)
the Troubadour-King (o Rei-Trovador) || son of Afonso III
|- style="background:lavender;"
|align=center| 7 || Afonso IV
Afonso IV of Portugal
Afonso IV , called the Brave , was the seventh king of Portugal and the Algarve from 1325 until his death. He was the only legitimate son of King Denis of Portugal by his wife Elizabeth of Aragon.-Biography:...

|| 7 January 1325 || 28 May 1357 ||
Alphonso or Alphonse IV (English),
Affonso IV (Old Portuguese),the Brave (o Bravo) || son of Dinis
|- style="background:lavender;"
|align=center| 8 || Pedro I
Peter I of Portugal
Peter I , called the Just , was the eighth King of Portugal and the Algarve from 1357 until his death. He was the third but only surviving son of Afonso IV of Portugal and his wife, princess Beatrice of Castile....

Peter I (English) || the Just (o Justiceiro)
or the Cruel (o Cruel)
the Vengeful (o Vingativo) or
the Until-the-End-of-the-World-In-Love
(o Até-ao-Fim-do-Mundo-Apaixonado) || son of Afonso IV
|- style="background:lavender;"
|align=center| 9 || Fernando I
Ferdinand I of Portugal
Ferdinand I , sometimes referred to as the Handsome or rarely as the Inconstant , was the ninth King of Portugal and the Algarve, the second son of Peter I and his wife, Constance of Castile...

the Master of Avis (o Mestre de Avis),
the One of Good Memory (o de Boa Memória),
the Good (o Bom)
or the Great (o Grande) Half-brother of Fernando I
Illegitimate son of Pedro I 11 Duarte

14 August 1433 9 September 1438 Edward (English) the Eloquent (o Eloquente) or
the Philosopher-King (o Rei-Filósofo) son of João I 12 Afonso V
Afonso V of Portugal
Afonso V KG , called the African , was the twelfth King of Portugal and the Algarves. His sobriquet refers to his conquests in Northern Africa.-Early life:... 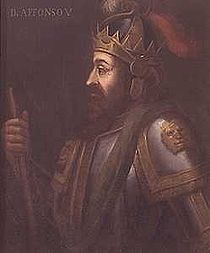 9 September 1438 11 November 1477 Alphonzo V (English),
Alphonse V (English),
Affonso V (Old Portuguese) the African (o Africano) son of Duarte Abdicated in favor of his son, who has assumed the duties of a regent of the kingdom. 13 João II
John II of Portugal
John II , the Perfect Prince , was the thirteenth king of Portugal and the Algarves...

11 November 1477 15 November 1477 John II (English) the Perfect Prince (o Príncipe Perfeito)
or
the Tyrant (o Tirano) son of Afonso V Acclaimed King by the Cortes of Santarém, only to abdicate and return the throne to his father. 12 Afonso V
Afonso V of Portugal
Afonso V KG , called the African , was the twelfth King of Portugal and the Algarves. His sobriquet refers to his conquests in Northern Africa.-Early life:...


House of Braganza-Saxe-Coburg and Gotha