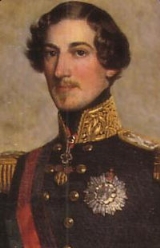 Encyclopedia
Ferdinand of Saxe-Coburg and Gotha (29 October 1816 – 15 December 1885), named Prince Ferdinand Augustus Francis Anthony of Saxe-Coburg-Gotha-Koháry, was King of Portugal as husband of Queen Maria II of Portugal from the birth of their son in 1837 to her death in 1853.

In keeping with Portuguese law, only after the birth of his son in 1837 did he acquire the title of King, reigning as Ferdinand II of Portugal. His reign came to end with the death of his wife in 1853, but he was regent
Regent
A regent, from the Latin regens "one who reigns", is a person selected to act as head of state because the ruler is a minor, not present, or debilitated. Currently there are only two ruling Regencies in the world, sovereign Liechtenstein and the Malaysian constitutive state of Terengganu...
for his son Pedro V
Pedro V of Portugal
* Duke of Barcelos* Marquis of Vila Viçosa* Count of Ourém* Count of Barcelos* Count of Arraiolos* Count of Guimarães-Honours:* Knight of the Garter* Knight of the Golden Fleece-Ancestry:...
to 1855. He was born a German prince of the House of Saxe-Coburg-Gotha.

Ferdinand was the son of Prince Ferdinand of Saxe-Coburg and Gotha and his wife Princess Maria Antonia Koháry de Csábrág
Maria Antonia Koháry de Csábrág
Mária Antónia, Prinzessin Koháry de Csábrág et Szitnya was a Hungarian noblewoman and the ancestress of many European monarchs.-Family and marriage:...
. Prince Ferdinand grew up in several places: the family's lands in modern-day Slovakia
Slovakia
The Slovak Republic is a landlocked state in Central Europe. It has a population of over five million and an area of about . Slovakia is bordered by the Czech Republic and Austria to the west, Poland to the north, Ukraine to the east and Hungary to the south...
, the imperial court of Austria
Austria
Austria , officially the Republic of Austria , is a landlocked country of roughly 8.4 million people in Central Europe. It is bordered by the Czech Republic and Germany to the north, Slovakia and Hungary to the east, Slovenia and Italy to the south, and Switzerland and Liechtenstein to the...
, and Germany
Germany
Germany , officially the Federal Republic of Germany , is a federal parliamentary republic in Europe. The country consists of 16 states while the capital and largest city is Berlin. Germany covers an area of 357,021 km2 and has a largely temperate seasonal climate...
. He was a nephew of King Leopold I of Belgium
Leopold I of Belgium
Leopold I was from 21 July 1831 the first King of the Belgians, following Belgium's independence from the Netherlands. He was the founder of the Belgian line of the House of Saxe-Coburg-Gotha...
and a first cousin to his children Leopold II of Belgium
Leopold II of Belgium
Leopold II was the second king of the Belgians. Born in Brussels the second son of Leopold I and Louise-Marie of Orléans, he succeeded his father to the throne on 17 December 1865 and remained king until his death.Leopold is chiefly remembered as the founder and sole owner of the Congo Free...
and Empress Carlota of Mexico
Charlotte of Belgium
Charlotte of Belgium is remembered today as Carlota of Mexico as empress consort of Emperor Maximilian I of Mexico, ex-Archduke of Austria.-Princess of Belgium:The only daughter of Leopold I, King of the Belgians by his second wife,...
, as well as Queen Victoria of the United Kingdom
Victoria of the United Kingdom
Victoria was the monarch of the United Kingdom of Great Britain and Ireland from 20 June 1837 until her death. From 1 May 1876, she used the additional title of Empress of India....
and her husband Prince Albert.

According to Portuguese law, the husband of a queen regnant could only be titled king after the birth of a child from that marriage (that was the reason the Queen's first husband, Auguste, Duke of Leuchtenberg, never earned title of king). After the birth of the future Peter V of Portugal, Ferdinand was proclaimed King Ferdinand II of Portugal.

Although it was Maria to whom the ruling power belonged, the royal couple formed a good team and together resolved many problems in Maria's reign. The king played a very important part in Portuguese political history, reigning by himself during his wife's pregnancies.

Eventually, Maria died as a result of the birth of their eleventh child. Ferdinand's reign ended, but assumed the regency of Portugal in the years 1853–1855 during the minority of his son King Peter V.

In 1869 he rejected an offer to assume the throne of Spain
Spain
Spain , officially the Kingdom of Spain languages]] under the European Charter for Regional or Minority Languages. In each of these, Spain's official name is as follows:;;;;;;), is a country and member state of the European Union located in southwestern Europe on the Iberian Peninsula...
.

Ferdinand was an intelligent and artistically-minded man with modern and liberal ideas. He was adept at etching, pottery and painting aquarelles. He was the president of the Royal Academy of Sciences and the Arts, lord-protector of the university of Coimbra
Coimbra
Coimbra is a city in the municipality of Coimbra in Portugal. Although it served as the nation's capital during the High Middle Ages, it is better-known for its university, the University of Coimbra, which is one of the oldest in Europe and the oldest academic institution in the...
and Grand-Master of the Rosicrucians.

In 1838 he built near Sintra
Sintra
Sintra is a town within the municipality of Sintra in the Grande Lisboa subregion of Portugal. Owing to its 19th century Romantic architecture and landscapes, becoming a major tourist centre, visited by many day-trippers who travel from the urbanized suburbs and capital of Lisbon.In addition to...
the Pena National Palace
Pena National Palace
The Pena National Palace is a Romanticist palace in São Pedro de Penaferrim, municipality of Sintra, Portugal. The palace stands on the top of a hill above the town of Sintra, and on a clear day it can be easily seen from Lisbon and much of its metropolitan area. It is a national monument and...
, a wild architectural fantasy in an eclectic
Eclecticism
Eclecticism is a conceptual approach that does not hold rigidly to a single paradigm or set of assumptions, but instead draws upon multiple theories, styles, or ideas to gain complementary insights into a subject, or applies different theories in particular cases.It can sometimes seem inelegant or...
style full of symbolism that could be compared with the castle Neuschwanstein of king Ludwig II of Bavaria
Ludwig II of Bavaria
Ludwig II was King of Bavaria from 1864 until shortly before his death. He is sometimes called the Swan King and der Märchenkönig, the Fairy tale King...
. He spent his last years in this castle with his second wife, receiving the greatest artists of his time.

Ferdinand married Maria II, Queen-regnant of Portugal, daughter of Peter IV of Portugal (I Emperor of Brazil). Later in his life, after the death of Maria, he married in Lisbon on 10 June 1869 actress Elisa Hensler (Neuchâtel, 22 May 1836 – Lisbon, Coração de Jesus, 21 May 1929), created Gräfin von Edla
Edla
Edla, traditionally called Edla, Duchess of Venden , was a Slavic Viking age woman. She was the mother of King Emund of Sweden and Queen Astrid of Norway....
, without issue.

He outlived eight of his eleven children.