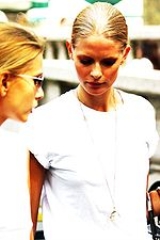 Encyclopedia
Julia Stegner is a German model
Model (person)
A model , sometimes called a mannequin, is a person who is employed to display, advertise and promote commercial products or to serve as a subject of works of art....
.

Stegner, the daughter of Günter Stegner, the Director Central and Eastern Europe for LSI Corporation
LSI Corporation
LSI Corporation is an electronics company based in Milpitas, California that designs semiconductors and software that accelerate storage and networking in datacenters and mobile networks.-History:...
, and Erika Stegner, an accountant
Accountant
An accountant is a practitioner of accountancy or accounting , which is the measurement, disclosure or provision of assurance about financial information that helps managers, investors, tax authorities and others make decisions about allocating resources.The Big Four auditors are the largest...
, was raised in an animal-loving household with many dogs alongside her older sister Jeanette, who currently works in film production. For seven years she was a child model, appearing in commercials and children's catalogs, and for nine years was trained in dance.

In high school she discovered a passion for playing basketball
Basketball
Basketball is a team sport in which two teams of five players try to score points by throwing or "shooting" a ball through the top of a basketball hoop while following a set of rules...
, and eventually she joined a club team in Munich
Munich
Munich The city's motto is "" . Before 2006, it was "Weltstadt mit Herz" . Its native name, , is derived from the Old High German Munichen, meaning "by the monks' place". The city's name derives from the monks of the Benedictine order who founded the city; hence the monk depicted on the city's coat...
. Being 180 cm tall by that time, she was naturally fit for the sport; her classmates even called her "Beanpole" because of her towering height.

Shortly before her 15th birthday, while celebrating Oktoberfest
Oktoberfest
Oktoberfest, or Wiesn, is a 16–18 day beer festival held annually in Munich, Bavaria, Germany, running from late September to the first weekend in October. It is one of the most famous events in Germany and is the world's largest fair, with more than 5 million people attending every year. The...
in her hometown, she was discovered by a Louisa von Minckwitz of Louisa Models. Tilla Lindig, a Munich and London based couture label as well as designer of happycoat of which Claudia Schiffer is equally a fan, first booked her. Although planning to study accounting when she left high school, Stegner moved to Paris to pursue modeling afterwards instead.

In Paris, she made her first major cover appearance, for Elle
Elle (magazine)
Elle is a worldwide magazine of French origin that focuses on women's fashion, beauty, health, and entertainment. Elle is also the world's largest fashion magazine. It was founded by Pierre Lazareff and his wife Hélène Gordon in 1945. The title, in French, means "she".-History:Elle was founded in...
magazine. She was eventually signed by Supreme Management and, within four months, she opened the fall 2003 Yves Saint Laurent
Yves Saint Laurent (brand)
Yves Saint Laurent or YSL is a luxury fashion house founded by Yves Saint Laurent and his partner, Pierre Bergé. Today, its chief designer is Stefano Pilati. Yves Saint Laurent, founder of the brand, died in 2008.-History:...
show. In 2003, she did Strenesse and Sportmax campaigns, among others and appeared on the cover of Vogue
Vogue (magazine)
Vogue is a fashion and lifestyle magazine that is published monthly in 18 national and one regional edition by Condé Nast.-History:In 1892 Arthur Turnure founded Vogue as a weekly publication in the United States. When he died in 1909, Condé Montrose Nast picked up the magazine and slowly began...
(French, Italian, Nippon, and German editions).

By the summer 2004, she had done advertisement work for Celine
Celine (brand)
Céline is a French luxury house founded in 1945 by Céline Vipiana. Today, it is an international luxury goods brand owned by LVMH, purchased in 1996 for 2.7 billion French francs ....
, Yves Saint Laurent
Yves Saint Laurent (brand)
Yves Saint Laurent or YSL is a luxury fashion house founded by Yves Saint Laurent and his partner, Pierre Bergé. Today, its chief designer is Stefano Pilati. Yves Saint Laurent, founder of the brand, died in 2008.-History:...
, Dolce & Gabbana
Dolce & Gabbana
Dolce & Gabbana is an Italian luxury industry fashion house. The company was started by the Italian designers Domenico Dolce and Stefano Gabbana in Milan, Italy. By 2005 their turnover was €597 million....
, Ralph Lauren
Ralph Lauren
Ralph Lauren is an American fashion designer and business executive; best known for his Polo Ralph Lauren clothing brand.-Early life:...
, and Dior
Christian Dior SA
Christian Dior S.A. is a French company which owns the high-fashion clothing producer and retailer Christian Dior Couture, as well as holding 42% of LVMH Moët Hennessy • Louis Vuitton, the world's largest luxury goods firm. Both Dior and LVMH are controlled and chaired by businessman Bernard...
. She also has been the Hugo Boss
Hugo Boss
Hugo Ferdinand Boss was the founder of clothing company Hugo Boss.-Early life:Boss was born in Metzingen, Germany. After completing his apprenticeship and one year of employment, he founded his own company in Metzingen in 1923.-Support of Nazism:Boss joined the Nazi Party in 1931, two years before...
house model for several seasons. Stegner has appeared in a 2005 campaign for French fashion house Chloé
Chloé
Chloé is a French fashion house founded in 1952 by Gaby Aghion. Its headquarters is in Paris.-History:Gaby Aghion was born in Alexandria, Egypt in the year 1921...
and shows such as Anna Sui
Anna Sui
Anna Sui is an American fashion designer. Her luxury brand retails globally in the Americas, Europe, Asia and the Middle East. Her clothing, fragrance, cosmetic, and accessories lines sell at Anna Sui stores in over 50 countries and are also widely distributed at leading department stores...
, Shiatzy Chen
Shiatzy Chen
Shiatzy Chen is a Taiwanese fashion house, whose founder and brand innovator Wang Chen Tsai-Hsia is often referred to as the Chanel of Taiwan,and is the eponym of her luxury goods brand. She was born in 1951 in Changhua, Taiwan and founded the company in 1978...
, Lanvin
Lanvin (clothing)
Lanvin is a high fashion house founded by Jeanne Lanvin.-History:Lanvin made such beautiful clothes for her daughter that they began to attract the attention of a number of wealthy people who requested copies for their own children...
, Gucci
Gucci
The House of Gucci, better known simply as Gucci , is an Italian fashion and leather goods label, part of the Gucci Group, which is owned by French company PPR...
, Versace and Valentino
Valentino SpA
Valentino SpA is a clothing company founded in 1959 by Valentino Garavani. Nowadays it is a part of Valentino Fashion Group. New creative directors Maria Grazia Chiuri and Pier Paolo Piccioli will take Alessandra Facchinetti's seat as creative designer...
. She also appeared in the 2005, 2006, 2007, 2008, 2009, 2010, and 2011 Victoria's Secret
Victoria's Secret
Victoria's Secret is an American retailer of women's wear, lingerie and beauty products. It is the largest segment of publicly-traded Limited Brands with sales of over US$5 billion and an operating income of $1 billion in 2006...
Fashion Shows.

She also modeled for the 2005 Pirelli Calendar
Pirelli Calendar
The Pirelli Calendar is a trade calendar published by the Pirelli company's UK subsidiary. It has become an annual publication that dates back to 1964....
, where she appeared half-nude. Stegner has done print and runway work for the fur industry
Fur farming
Fur farming is the practice of breeding or raising certain types of animals for their fur.Fur used from wild caught animals is not farmed, and is instead known as 'free range fur' because the animals have lived their lives free and natural in the wild....
, wearing fur clothing
Fur clothing
Fur clothing is clothing made of the fur of animals. Fur is one of the oldest forms of clothing; thought to have been widely used as hominids first expanded outside of Africa. Some view fur as luxurious and warm; others reject it due to moral beliefs...
for American Legend Minks
American Legend Cooperative
The American Legend Cooperative is an agricultural marketing cooperative of mink fur farmers in the United States and Canada, best known for its "Blackglama" and "American Legend", brands of fur....
and others.

She has been the face of Aquascutum
Aquascutum
"Aquascutum" is a UK-based luxury clothing manufacturer and retailer, owned by Jaeger.-Company history:Aquascutum was established in 1851, the year of the Great Exhibition, when tailor and entrepreneur John Emary opened a high quality menswear shop at 46 Regent Street...
, Guerlain
Guerlain
Guerlain is a French perfume house, among the oldest in the world. It has a large and loyal customer following, and is held in high esteem in the perfume industry...
KissKiss, Hugo Boss
Hugo Boss
Hugo Ferdinand Boss was the founder of clothing company Hugo Boss.-Early life:Boss was born in Metzingen, Germany. After completing his apprenticeship and one year of employment, he founded his own company in Metzingen in 1923.-Support of Nazism:Boss joined the Nazi Party in 1931, two years before...
Eyewear and the Hugo Boss perfume, and Femme. In 2008, she became a face of Maybelline
Maybelline
Maybelline is an American makeup brand sold worldwide and owned by L'Oréal. Their motto is Maybe she's born with it. Maybe it's Maybelline.-History:...
and Gianfranco Ferré
Gianfranco Ferrè
Gianfranco Ferré was a fashion designer also known as "the architect of fashion" for his background and his original attitude toward creating fashion design....
. In 2009 she became the new face of Mercedes Benz advertising.

She usually rides a bicycle.