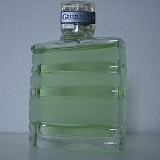 Encyclopedia
Guerlain is a French perfume
Perfume
Perfume is a mixture of fragrant essential oils and/or aroma compounds, fixatives, and solvents used to give the human body, animals, objects, and living spaces "a pleasant scent"...
house, among the oldest in the world. It has a large and loyal customer following, and is held in high esteem in the perfume industry. Perfumes by Guerlain are often said to be characterized by a common olfactory accord known as the "Guerlinade." A perfume by the same name was launched by Guerlain in 1921.

The House of Guerlain was owned and managed by members of the Guerlain family from 1828 to 1994. It was acquired in 1994 by the LVMH
LVMH
LVMH Moët Hennessy • Louis Vuitton S.A., better known as LVMH, is a French multinational luxury goods conglomerate headquartered in Paris, Île-de-France, France. The company was formed after the 1987 merger of fashion house Louis Vuitton with Moët Hennessy, a company formed after the 1971 merger...
group, a multinational investment corporation specializing in luxury brands.

The House of Guerlain was founded in 1828, when Pierre-François Pascal Guerlain opened his perfume store at 42, rue de Rivoli in Paris. As both the founder and first perfumer of the house, Pierre-François composed and manufactured custom fragrances with the help of his two sons, Aimé and Gabriel. Through continued success and the patronage of members in high society, Guerlain opened its flagship store at 15, rue de la Paix in 1840, and put its mark on the Parisian fashion scene.

The success of the house under Pierre-François peaked in 1853 with the creation of Eau de Cologne Impériale for French Emperor Napoleon III and his wife Empress Eugénie
Eugénie de Montijo
Doña María Eugenia Ignacia Augustina de Palafox-Portocarrero de Guzmán y Kirkpatrick, 16th Countess of Teba and 15th Marquise of Ardales; 5 May 1826 – 11 July 1920), known as Eugénie de Montijo , was the last Empress consort of the French from 1853 to 1871 as the wife of Napoleon III, Emperor of...
. This perfume earned Pierre-François the prestigious title of being His Majesty's Official Perfumer. Guerlain went on to create perfumes for Queen Victoria of the United Kingdom and Queen Isabella II of Spain, among other royalty.

With the death of Pierre-François in 1864, the house was left to his sons Aimé Guerlain and Gabriel Guerlain. The roles of perfumer and manager were divided between the two brothers, with Gabriel managing and further expanding the house, and Aimé becoming the master perfumer. The House of Guerlain thus began a long tradition whereby the position of master perfumer was handed down through the Guerlain family.

As Guerlain's second generation in-house perfumer, Aimé was the creator of many classic compositions, including Fleur d'Italie (1884), Rococo (1887) and Eau de Cologne du Coq (1894). However, many would argue that his greatest composition was 1889's Jicky, the first fragrance described as a "parfum" and among the first to use synthetic ingredients alongside natural extracts.

The business was handed down to the sons of Gabriel Guerlain: Jacques Guerlain and Pierre Guerlain. Jacques, Aimé's nephew, became Guerlain's third master perfumer; he was the author of many of Guerlain's most famous classics, which are still held in high esteem in the modern perfume industry. Many of his perfumes are still sold and marketed today. Among Jacques Guerlain's most important creations are Mouchoir de Monsieur (1904), Après L'Ondée (1906), L'Heure Bleue (1912), Mitsouko
Mitsouko (perfume)
Mitsouko is a 1919 perfume by Guerlain. Its name is derived from the French transliteration of a Japanese female personal name. Its top notes are a fruity chypre, with floral middle notes and spice base notes.-History:...
(1919), Vol de Nuit (1933), and Guerlain's flagship fragrance Shalimar
Shalimar (perfume)
Shalimar is a women’s fragrance originally created by Jacques Guerlain in 1921 as a classic soft amber parfum, and currently produced by Guerlain.-History:...
(1925). Jacques composed his final perfume, Ode (1955), with the assistance of his grandson, the then-18-year-old Jean-Paul Guerlain.

Jean-Paul Guerlain was the last family master perfumer. He created Guerlain's classic men's fragrances Vétiver (1959) and Habit Rouge (1965); the latter is considered by many to be the first oriental fragrance for men. He also created Chamade (1969), Nahéma (1979), Jardins de Bagatelle (1983), and Samsara (1989), as well as Héritage and Coriolan in the 1990s. With the retirement of Jean-Paul in 2002, and no heir from inside the family to take over, the role of master perfumer is no longer tied to family succession.


Purchase by the LVMH Group

In a decision widely seen as a break with tradition, the Guerlain family sold the company to the luxury goods conglomerate Moët Hennessy Louis Vuitton (LVMH) in 1994. Though Jean-Paul Guerlain remained as an in-house perfumer until 2002, other perfumers were brought in after 1994 to compose perfumes for Guerlain, and Jean-Paul had to submit his compositions against those of others. Fans of the house viewed the LVMH purchase as a step towards the cheapening and commercialization of the legendary firm's legacy. Most were unhappy with the first post-LVMH release, the 1996 sweet mimosa floral Champs-Elysées, composed by Olivier Cresp, whose entry was selected over that of Jean-Paul Guerlain.

Among the outside perfumers to compose perfumes for the firm after 1994 was Mathilde Laurent, who worked for Guerlain at the end of the 1990s and in the early 2000s. She composed Aqua Allegorica Pamplelune (1999) and Shalimar Light (2003, reattributed to Jean-Paul Guerlain and relaunched in 2004 following reformulation). Maurice Roucel
Maurice Roucel
thumb|Maurice Roucel. Photo: Guillaume Luisetti.Maurice Roucel is a contemporary perfumer who has worked at companies IFF, Quest, Dragoco and presently Symrise. Roucel began his career in perfumery on February 19, 1973 while working as the head chromatography chemist at Chanel for 6 years. He...
, a perfumer of Symrise
Symrise
Symrise is a major producer of flavors and fragrances with sales of € 1,572 million in 2010. Major competitors include Firmenich, Givaudan, International Flavors and Fragrances and Takasago International.-History:...
, composed L'Instant de Guerlain (2004) and Insolence (2006).

In May 2008, Thierry Wasser
Thierry Wasser
Thierry Wasser is a contemporary perfumer who as of 2008 was appointed as the in-house perfumer of Guerlain. Prior to this he worked under the fragrance firms Firmenich and Givaudan....
was named the in-house perfumer for Guerlain. Wasser, a Swiss
Switzerland
Switzerland name of one of the Swiss cantons. ; ; ; or ), in its full name the Swiss Confederation , is a federal republic consisting of 26 cantons, with Bern as the seat of the federal authorities. The country is situated in Western Europe,Or Central Europe depending on the definition....
perfumer who used to work for Firmenich
Firmenich
Firmenich SA is a private Swiss company in the perfume and flavor business, it is the largest privately-owned company in the perfume and flavor business, and ranks number two worldwide., Firmenich has created many of the world’s favorite perfumes for over 100 years and produced a number of the most...
, created Iris Ganache (2007) and Quand Vient la Pluie (2007) for Guerlain before his appointment the following year. Jean-Paul Guerlain is staying on in an advisory consultant role, both for fragrance design and ingredients. Wasser will work closely with Sylvaine Delacourte, Guerlain's Artistic Director. 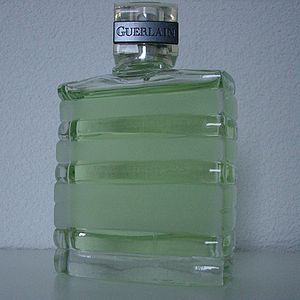 Guerlain's creations have long influenced the trends of perfumery with fragrances such as Jicky, Shalimar, and Vétiver. Guerlain is among the few older houses (such as Caron
Parfums Caron
Parfums Caron is a French perfume house, established by Ernest Daltroff in 1904.-External links:**...
) that exist solely to produce and market perfumes. (Nowadays this includes a range of makeup and skincare products.) Many brands in the perfume industry, such as Chanel
Chanel
Chanel S.A. is a French fashion house founded by the couturier Gabrielle "Coco" Chanel, well established in haute couture, specializing in luxury goods . She gained the name "Coco" while maintaining a career as a singer at a café in France...
and Jean Patou
Jean Patou
- Early life :Patou was born in Normandy, France in 1880. Patou's family's business was tanning and furs. Patou worked with his uncle in Normandy, then moved to Paris in 1910, intent on becoming a couturier.-1910s - World War I and later:...
are in fact divisions of fashion houses or Multi National conglomerates that license the name such as P&G Prestige Beaute with Gucci
Gucci
The House of Gucci, better known simply as Gucci , is an Italian fashion and leather goods label, part of the Gucci Group, which is owned by French company PPR...
, which produce perfumes as part of a broader range of products.

Since its foundation in 1828, Guerlain has created over 300 fragrances. A non-exhaustive list is as follows:

In October 2010, several black and anti-racist associations called for an international boycott of Guerlain and LVMH products, in response to remarks made by Jean-Paul Guerlain on French television. Speaking about the making of the famous Samsara fragrance, Jean-Paul Guerlain said: "And for once I started working like a nigger. I don't know if niggers ever worked that hard".

Since its acquisition by LVMH, Guerlain has reformulated some of its classics for health compliance reasons. These could potentially mean the end of the traditional formulations of many classics such as Mitsouko and Shalimar.