Bendemann was born in Dresden
Dresden
Dresden is the capital city of the Free State of Saxony in Germany. It is situated in a valley on the River Elbe, near the Czech border. The Dresden conurbation is part of the Saxon Triangle metropolitan area....
, Kingdom of Saxony
Kingdom of Saxony
The Kingdom of Saxony , lasting between 1806 and 1918, was an independent member of a number of historical confederacies in Napoleonic through post-Napoleonic Germany. From 1871 it was part of the German Empire. It became a Free state in the era of Weimar Republic in 1918 after the end of World War...
. He was the son of the painter Eduard Julius Friedrich Bendemann (1811–1889) and Lida Schadow, who was the daughter of the sculptor Johann Gottfried Schadow
Johann Gottfried Schadow
Johann Gottfried Schadow was a German sculptor.-Biography:Schadow was born in Berlin, where his father was a poor tailor....
. The painter Rudolf Bendemann was his brother.

Bendemann and three brothers served in the Franco-Prussian War
Franco-Prussian War
The Franco-Prussian War or Franco-German War, often referred to in France as the 1870 War was a conflict between the Second French Empire and the Kingdom of Prussia. Prussia was aided by the North German Confederation, of which it was a member, and the South German states of Baden, Württemberg and...
in 1870-71. He was in the Prussian Navy
Prussian Navy
Throughout the centuries, Prussia’s military consistently concentrated on its land power, and never sought a similar power at sea. Yet historically there were always Prussian naval forces , beginning in the days when "Prussia" meant only the Margraviate of Brandenburg.- The Navy of Electoral...
as an officer on the gunboat SMS Meteor in Key West
Key West
Key West is an island in the Straits of Florida on the North American continent at the southernmost tip of the Florida Keys. Key West is home to the southernmost point in the Continental United States; the island is about from Cuba....
when the war began. On October 23 the news of the outbreak of war reached the ship’s captain, Eduard von Knorr
Eduard von Knorr
Ernst Wilhelm Eduard von Knorr was a German admiral of the Kaiserliche Marine who helped establish the German colonial empire.-Life:...
. The SMS Meteor sailed for Cuba where, on November 9 they fought the only serious naval battle of the war with the French aviso
Aviso
An aviso , a kind of dispatch boat or advice boat, survives particularly in the French navy, they are considered equivalent to the modern sloop....
Bouvet commanded by capitaine de frégate Alexandre Franquet. After an artillery exchange and an attempts by the Bouvet to ram the Meteor, both ships were incapacitated. Although the French left the scene of battle, the outcome was indecisive. As a result of this wartime conduct, he was honored with the then rarely given Iron Cross
Iron Cross
The Iron Cross is a cross symbol typically in black with a white or silver outline that originated after 1219 when the Kingdom of Jerusalem granted the Teutonic Order the right to combine the Teutonic Black Cross placed above a silver Cross of Jerusalem....
.

Bendeman was enrolled in the German Imperial Naval Academy (Marineakademie) in 1874. In his class would be three other future admirals: Otto von Diederichs
Otto von Diederichs
Ernst Otto von Diederichs was an Admiral of the German Imperial Navy, serving in the predecessor Prussian Navy and the Navy of the North German Confederation.-Education, war and peace:Diederichs entered the Prussian...
, Viktor Valois
Viktor Valois
Victor Valois , was a vice-admiral in the German Imperial Navy. He graduated from the post-graduate Naval War College, the German Imperial Naval Academy 1872-1918 in 1874 in a class with three other future admirals: Otto von Diederichs, Felix von Bendemann, Gustav von Senden-Bibran.He married...
and Gustav von Senden-Bibran
Gustav von Senden-Bibran
Gustav Freiherr von Senden-Bibran was an admiral of the German Imperial Navy. His father was a Silesian landowner who had served in the Austro-Hungarian Calvary. He entered the Prussian Navy at age 15, never married, and dedicated his life to building a strong German Navy...
.
Lieutenant-Commander (Korvettenkapitän) Bendemann commanded the SMS Olga in 1884 as part of the newly formed West African-cruiser squadron (Westafrikanische Geschwader), again under Rear Admiral Eduard von Knorr, to carry out "gunboat diplomacy
Gunboat diplomacy
In international politics, gunboat diplomacy refers to the pursuit of foreign policy objectives with the aid of conspicuous displays of military power — implying or constituting a direct threat of warfare, should terms not be agreeable to the superior force....
" in Germany’s Western African area of interest, the colony of Kamerun
Kamerun
German Cameroon was a West African colony of the German Empire from 1884 to 1916 in the region of today's Republic of Cameroon.-History:-1800s:...
, against a local revolt. Troops landed from Knorr’s SMS Fürst Bismarck
SMS Fürst Bismarck (1896)
SMS Fürst Bismarck"SMS" stands for "Seiner Majestät Schiff", or "His Majesty's Ship" in German. was Germany's first armored cruiser, built for the Kaiserliche Marine before the turn of the 20th century. She was named for the German statesman Otto von Bismarck...
and the Olga stormed the rebels and by 22 December succeeded in defeating the rebels. This led to treaties with France and Britain recognizing Cameroon as a German Colony. Afterward, a pleased Kaiser Wilhelm I awarded Bendemann the Prussian Order of the Royal Crown
Order of the Crown (Prussia)
The Order of the Crown was Prussia's lowest ranking order of chivalry. Instituted in 1861 as an award equal in rank to the Order of the Red Eagle, it could only be awarded to commissioned officers , but there was a medal associated with the order which could be earned by non-commissioned officers...
, 3rd Class with Swords.

From March 14 through December 31, 1899, he served as Chief of the Admiralty Staff
German Imperial Admiralty
The German Imperial Admiralty was an imperial authority in the German Empire. By order of Kaiser Wilhelm I the Northern German Federal Navy Department of the North German Confederation , which had been formed from the Prussian Navy Department , became on 1 January 1872 the German Imperial Admiralty...
(Admiralstab). In this position he expressed his concern for what he saw as Germany's hopeless situation with a weak navy and facing Britain in isolation. One solution he saw an alliance with the United States, which was already a valuable trading partner of Germany.
He also favored such realpolitik
Realpolitik
Realpolitik refers to politics or diplomacy based primarily on power and on practical and material factors and considerations, rather than ideological notions or moralistic or ethical premises...
actions as the violation of Danish
Denmark
Denmark is a Scandinavian country in Northern Europe. The countries of Denmark and Greenland, as well as the Faroe Islands, constitute the Kingdom of Denmark . It is the southernmost of the Nordic countries, southwest of Sweden and south of Norway, and bordered to the south by Germany. Denmark...
neutrality, in case of war with Great Britain, by immediately occupying the waterways of the Danish archipelago (The Belts
The Belts
The Belts are two straits in the Danish archipelago, Little Belt and Great Belt.See also the march across the Belts.See also danish straits....
) to deny the Royal Navy
Royal Navy
The Royal Navy is the naval warfare service branch of the British Armed Forces. Founded in the 16th century, it is the oldest service branch and is known as the Senior Service...
access to the Baltic Sea
Baltic Sea
The Baltic Sea is a brackish mediterranean sea located in Northern Europe, from 53°N to 66°N latitude and from 20°E to 26°E longitude. It is bounded by the Scandinavian Peninsula, the mainland of Europe, and the Danish islands. It drains into the Kattegat by way of the Øresund, the Great Belt and...
and Russia
Russia
Russia or , officially known as both Russia and the Russian Federation , is a country in northern Eurasia. It is a federal semi-presidential republic, comprising 83 federal subjects...
. 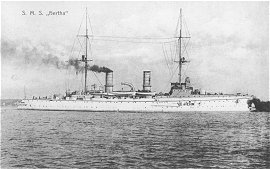 Admiral von Bendemann died in Halensee
Halensee
Halensee is a locality of Berlin in the district of Charlottenburg-Wilmersdorf. Until 2004 the former neighbourhood established about 1880 was part of the Wilmersdorf locality, and until 2001 of the same-named former borough...
(Berlin
Berlin
Berlin is the capital city of Germany and is one of the 16 states of Germany. With a population of 3.45 million people, Berlin is Germany's largest city. It is the second most populous city proper and the seventh most populous urban area in the European Union...
) on October 31, 1915.