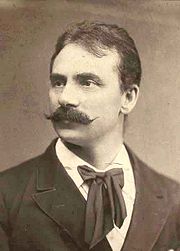 Johan Severin Svendsen was a Norwegian
Norway
Norway , officially the Kingdom of Norway, is a Nordic unitary constitutional monarchy whose territory comprises the western portion of the Scandinavian Peninsula, Jan Mayen, and the Arctic archipelago of Svalbard and Bouvet Island. Norway has a total area of and a population of about 4.9 million...
composer
Composer
A composer is a person who creates music, either by musical notation or oral tradition, for interpretation and performance, or through direct manipulation of sonic material through electronic media...
, conductor
Conducting
Conducting is the art of directing a musical performance by way of visible gestures. The primary duties of the conductor are to unify performers, set the tempo, execute clear preparations and beats, and to listen critically and shape the sound of the ensemble...
and violin
Violin
The violin is a string instrument, usually with four strings tuned in perfect fifths. It is the smallest, highest-pitched member of the violin family of string instruments, which includes the viola and cello....
ist. Born in Christiania (now Oslo
Oslo
Oslo is a municipality, as well as the capital and most populous city in Norway. As a municipality , it was established on 1 January 1838. Founded around 1048 by King Harald III of Norway, the city was largely destroyed by fire in 1624. The city was moved under the reign of Denmark–Norway's King...
), Norway, he lived most his life in Copenhagen
Copenhagen
Copenhagen is the capital and largest city of Denmark, with an urban population of 1,199,224 and a metropolitan population of 1,930,260 . With the completion of the transnational Øresund Bridge in 2000, Copenhagen has become the centre of the increasingly integrating Øresund Region...
, Denmark
Denmark
Denmark is a Scandinavian country in Northern Europe. The countries of Denmark and Greenland, as well as the Faroe Islands, constitute the Kingdom of Denmark . It is the southernmost of the Nordic countries, southwest of Sweden and south of Norway, and bordered to the south by Germany. Denmark...
.
Svendsen's output includes two symphonies, a violin concerto, and the Romance for violin, as well as a number of Norwegian Rhapsodies for orchestra. At one time Svendsen was intimate friends with the German composer Richard Wagner
Richard Wagner
Wilhelm Richard Wagner was a German composer, conductor, theatre director, philosopher, music theorist, poet, essayist and writer primarily known for his operas...
.

His father was a music teacher and Svendsen learned both the violin and clarinet from him. By the time he finished school, he was working as an orchestral musician, and occasionally made short concert tours as a violinist. In Lübeck, on one of his tours, he came to the attention of a wealthy merchant who made it possible for him to study from 1863-67 at the Leipzig Conservatory. He began his studies with Ferdinand David, but problems with his hand forced him to switch to composition, which he studied with Carl Reinecke
Carl Reinecke
Carl Heinrich Carsten Reinecke was a German composer, conductor, and pianist.-Biography:Reinecke was born in Altona, Hamburg, Germany; until 1864 the town was under Danish rule. He studied with his father, Johann Peter Rudolph Reinecke, a music teacher...
. He completed his studies in Leipzig in 1867, receiving first prize in composition. During this period, Svendsen had a son out of wedlock, Johann Richard Rudolph (1867–1933).

Gradually his attention turned to conducting. After spending time in Paris (1868–70) and Leipzig (1870–72), he returned to Christiania. In the summer of 1871, he went to New York City to marry Sarah (Sally, later changed to Bergljot) Levett Schmidt, whom he had met in Paris. He was conductor of the Musical Society Concerts in Christiania (1872–77), then spent three years in Germany, Italy, England and France. He returned to teach and conduct in Kristiania (1880–1883). In 1883, he was appointed principal conductor of the Royal Theater Orchestra in Copenhagen, where he lived until his death.

In 1884, he and his wife separated, and she moved to Paris. Their relationship had been chaotic for several years. In 1883, in a fit of anger, she had thrown the only copy of his Symphony No. 3 in the fire. This incident was used by Henrik Ibsen
Henrik Ibsen
Henrik Ibsen was a major 19th-century Norwegian playwright, theatre director, and poet. He is often referred to as "the father of prose drama" and is one of the founders of Modernism in the theatre...
in Hedda Gabler
Hedda Gabler
Hedda Gabler is a play first published in 1890 by Norwegian playwright Henrik Ibsen. The play premiered in 1891 in Germany to negative reviews, but has subsequently gained recognition as a classic of realism, nineteenth century theatre, and world drama...
. Following a divorce from Sarah (10 December 1901), he married (23 December 1901) Juliette Haase with whom he had been living and had three children. His younger son from this marriage was the famous Danish actor Eyvind Johan-Svendsen
Eyvind Johan-Svendsen
Eyvind Johan-Svendsen was a Danish stage and film actor. He worked in Danish theatre between 1917 and 1939 and appeared at the Det Kongelige Teater in Copenhagen from 1926 to 1939...
(1896–1946).

In stark contrast to his more famous contemporary and close friend, Edvard Grieg
Edvard Grieg
Edvard Hagerup Grieg was a Norwegian composer and pianist. He is best known for his Piano Concerto in A minor, for his incidental music to Henrik Ibsen's play Peer Gynt , and for his collection of piano miniatures Lyric Pieces.-Biography:Edvard Hagerup Grieg was born in...
, Svendsen was famous for his skill of orchestration rather than that of harmonic value. While Grieg composed mostly for small instrumentation, Svendsen composed primarily for orchestras and large ensembles. His most famous work is his Romance
Romance (music)
The term romance has a centuries-long history. Applied to narrative ballads in Spain, it came to be used by the 18th century for simple lyrical pieces not only for voice, but also for instruments alone. During the 18th and 19th centuries Russian composers developed the French variety of the...
for Violin
Violin
The violin is a string instrument, usually with four strings tuned in perfect fifths. It is the smallest, highest-pitched member of the violin family of string instruments, which includes the viola and cello....
and Orchestra
Orchestra
An orchestra is a sizable instrumental ensemble that contains sections of string, brass, woodwind, and percussion instruments. The term orchestra derives from the Greek ορχήστρα, the name for the area in front of an ancient Greek stage reserved for the Greek chorus...
, Op. 26. He was very popular in Denmark and Norway during his lifetime, both as a composer and a conductor, winning many national awards and honors. However this popularity did not translate into acceptance into the international repertory of classical music. He died in Copenhagen, aged 70.

Svendsen's first published work, the String Quartet in A minor, Op. 1, achieved great popular success. He quickly followed with the String Octet, Op. 3 and String Quintet, Op. 5, both of which added to his early fame. All of Svendsen's chamber music was written while he was at the Leipzig Conservatory, yet these works are not considered student works. By general consensus, Svendsen was regarded as one of the most talented students then at the Conservatory. His works won prizes and received public performances to much acclaim.

In parentheses, composition years and premiere place and date

About 50 other minor works, not included in his numbered catalog.