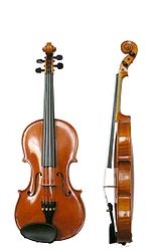 The violin is sometimes informally called a fiddle
Fiddle
The term fiddle may refer to any bowed string musical instrument, most often the violin. It is also a colloquial term for the instrument used by players in all genres, including classical music...
, regardless of the type of music played on it. The word violin comes from the Middle Latin word vitula, meaning stringed instrument; this word is also believed to be the source of the Germanic
Germanic languages
The Germanic languages constitute a sub-branch of the Indo-European language family. The common ancestor of all of the languages in this branch is called Proto-Germanic , which was spoken in approximately the mid-1st millennium BC in Iron Age northern Europe...
"fiddle".