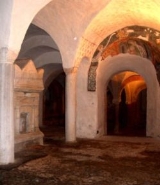 Encyclopedia
Ivrea is a town and comune
Comune
In Italy, the comune is the basic administrative division, and may be properly approximated in casual speech by the English word township or municipality.-Importance and function:...
of the province of Turin
Province of Turin
The Province of Turin is a province in the Piedmont region of Italy. Its capital is the city of Turin.It has an area of 6,830 km², and a total population of 2,277,686 . There are 315 comuni in the province – the most of any province in Italy...
in the Piedmont
Piedmont
Piedmont is one of the 20 regions of Italy. It has an area of 25,402 square kilometres and a population of about 4.4 million. The capital of Piedmont is Turin. The main local language is Piedmontese. Occitan is also spoken by a minority in the Occitan Valleys situated in the Provinces of...
region of northwestern Italy
Italy
Italy , officially the Italian Republic languages]] under the European Charter for Regional or Minority Languages. In each of these, Italy's official name is as follows:;;;;;;;;), is a unitary parliamentary republic in South-Central Europe. To the north it borders France, Switzerland, Austria and...
. Situated on the road leading to the Aosta Valley (part of the medieval Via Francigena
Via Francigena
The Via Francigena is an ancient road between Rome and Canterbury, passing through England, France, Switzerland and Italy. In mediaeval times it was an important road and pilgrimage route...
), it straddles the Dora Baltea
Dora Baltea
Dora Baltea or Doire Baltée , is a river in northern Italy. It is a left-hand tributary of the Po River, and is about 160 km long...
and is regarded as the centre of the Canavese
Canavese
thumb|250px|Church of Santa Croce at [[Sparone]].Canavese is a subalpine geographical and historical area of north-west Italy which lies today within the Province of Turin in Piedmont. Its main town is Ivrea and it is famous for its castles.-Location:...
area. Ivrea lies in a basin that, in prehistoric times, formed a great lake. Today a number of five smaller lakes — Sirio, San Michele, Pistono, Nero and Campagna — dot the area around the town.

During the 20th century its primary claim to fame was as the base of operations for Olivetti
Olivetti
Olivetti S.p.A. is an Italian manufacturer of computers, printers and other business machines.- Founding :The company was founded as a typewriter manufacturer in 1908 in Ivrea, near Turin, by Camillo Olivetti. The firm was mainly developed by his son Adriano Olivetti...
, a renowned manufacturer of typewriter
Typewriter
A typewriter is a mechanical or electromechanical device with keys that, when pressed, cause characters to be printed on a medium, usually paper. Typically one character is printed per keypress, and the machine prints the characters by making ink impressions of type elements similar to the pieces...
s, mechanical calculator
Calculator
An electronic calculator is a small, portable, usually inexpensive electronic device used to perform the basic operations of arithmetic. Modern calculators are more portable than most computers, though most PDAs are comparable in size to handheld calculators.The first solid-state electronic...
s and, later, computer
Computer
A computer is a programmable machine designed to sequentially and automatically carry out a sequence of arithmetic or logical operations. The particular sequence of operations can be changed readily, allowing the computer to solve more than one kind of problem...
s. The company no longer has an independent existence, though its name still appears as a registered trademark on office equipment manufactured by others. In 1970 about 90,000 people (including commuters from Southern Italy) lived and worked in the Ivrea Area. When Olivetti closed its operations the population dropped to 30% of its former level.

The town first appears in history as a cavalry station of the army of the Roman Empire
Roman Empire
The Roman Empire was the post-Republican period of the ancient Roman civilization, characterised by an autocratic form of government and large territorial holdings in Europe and around the Mediterranean....
, founded in 100 BC and set to guard one of the traditional invasion routes into northern Italy over the Alps
Alps
The Alps is one of the great mountain range systems of Europe, stretching from Austria and Slovenia in the east through Italy, Switzerland, Liechtenstein and Germany to France in the west....
. The Latin
Latin
Latin is an Italic language originally spoken in Latium and Ancient Rome. It, along with most European languages, is a descendant of the ancient Proto-Indo-European language. Although it is considered a dead language, a number of scholars and members of the Christian clergy speak it fluently, and...
name of the town was Eporedia.
After the fall of the Western Roman Empire
Western Roman Empire
The Western Roman Empire was the western half of the Roman Empire after its division by Diocletian in 285; the other half of the Roman Empire was the Eastern Roman Empire, commonly referred to today as the Byzantine Empire....
, Ivrea became seat of a duchy under the Lombards
Lombards
The Lombards , also referred to as Longobards, were a Germanic tribe of Scandinavian origin, who from 568 to 774 ruled a Kingdom in Italy...
(6th-8th centuries).
Alessandro Manzoni
Alessandro Manzoni
Alessandro Francesco Tommaso Manzoni was an Italian poet and novelist.He is famous for the novel The Betrothed , generally ranked among the masterpieces of world literature...
in his Adelchi
Adelchi (tragedy)
Adelchi is the second tragedy written by Alessandro Manzoni. It was first published in 1822.The main character is Adelchi, a Longobard prince torn by the inner conflict between his father Desiderio's will and his own desire for peace....
, names one duke Guinigi of Ivrea, chosen by king Desiderius
Desiderius
Desiderius was the last king of the Lombard Kingdom of northern Italy...
as defender of Pavia
Pavia
Pavia , the ancient Ticinum, is a town and comune of south-western Lombardy, northern Italy, 35 km south of Milan on the lower Ticino river near its confluence with the Po. It is the capital of the province of Pavia. It has a population of c. 71,000...
. Under the Franks
Franks
The Franks were a confederation of Germanic tribes first attested in the third century AD as living north and east of the Lower Rhine River. From the third to fifth centuries some Franks raided Roman territory while other Franks joined the Roman troops in Gaul. Only the Salian Franks formed a...
(9th century), Ivrea was a county capital. In the year 1001, after a period of disputes with bishop Warmund, ruler of the city, Arduin conquered March of Ivrea
March of Ivrea
The March of Ivrea was a large frontier county in the northwest of the medieval Italian kingdom from the late 9th to the early 11th century. Its capital was Ivrea in present-day Piedmont, and it was held by a Burgundian family of margraves called the Anscarids...
. Later he became King of Italy and set a dynasty that lasted until the 11th century, when the city switched again to the bishops' suzerainty.
The following century Ivrea became a free commune, but succumbed in the first decades of the 13th century. In 1238 Emperor Frederick II
Frederick II, Holy Roman Emperor
Frederick II , was one of the most powerful Holy Roman Emperors of the Middle Ages and head of the House of Hohenstaufen. His political and cultural ambitions, based in Sicily and stretching through Italy to Germany, and even to Jerusalem, were enormous...
put it under his domains. Later Ivrea was disputed between the bishops, the marquis of Monferrato and the House of Savoy
House of Savoy
The House of Savoy was formed in the early 11th century in the historical Savoy region. Through gradual expansion, it grew from ruling a small county in that region to eventually rule the Kingdom of Italy from 1861 until the end of World War II, king of Croatia and King of Armenia...
.

In 1356 Ivrea was acquired by Amadeus VI of Savoy. With the exception of the brief French conquest at the end of the 16th century, Ivrea remained under Savoy until 1800 – it was a subsidiary title of the king of Sardinia. The only Marquis of Ivrea was Benedetto of Savoy (who later fought in the French Revolutionary wars). On May 26, 1800 Napoleon Bonaparte entered the city along with his victorious troops, establishing control that ended in 1814 after his fall. 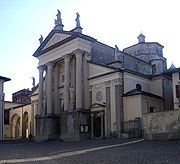 Battle of the Oranges 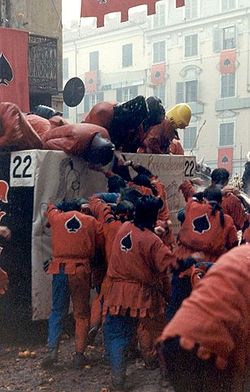 Ivrea today is best known for its peculiar traditional carnival
Carnival
Carnaval is a festive season which occurs immediately before Lent; the main events are usually during February. Carnaval typically involves a public celebration or parade combining some elements of a circus, mask and public street party...
. The core celebration centres around the locally famous Battle of the Oranges
Battle of the Oranges
The Battle of the Oranges is a carnival and festival in the Northern Italian city of Ivrea, which includes a tradition of throwing of oranges between organized groups. It is the largest food fight in Italy.-History of festival:...
. This involves some thousands of townspeople, divided into nine combat teams, who throw oranges at each other — with considerable violence — during the traditional carnival days: Sunday, Monday and Tuesday. The carnival takes place in February; it ends on the night of "Fat Tuesday" with a solemn funeral. Traditionally, at the end of the silent march that closes the carnival the "General" says goodbye to everyone with the traditional phrase "See you next Fat Thursday at 1 p.m."

One of the citizens is elected Mugnaia. The legend has that a miller's daughter (the eponymous "Mugnaia") once refused to accept the "right" of the local duke to spend a night with each newly wed woman
Droit de seigneur
Droit du seigneur is an alleged legal right allowing the lord of a medieval estate to take the virginity of his serfs' maiden daughters. There is no historical evidence that such a right ever existed.-Terminology:...
and chopped his head off. Today the carriages represent the duke's guard and the orange throwers the revolutionaries. Spectators are not allowed to throw oranges, but visitors are allowed to enlist in the teams. If they wear a red hat they are considered part of the revolutionaries and will not have oranges thrown at them.

Before oranges were thrown they used apples. Later, oranges came to represent the duke's chopped off head. The origin of the tradition to throw oranges is not well understood, particularly as oranges do not grow in the foothills of the Italian Alps and must be imported from Sicily. In 1994 an estimate of 265000 kilograms (584,225 lb) of oranges were brought to the city, mainly coming from the leftovers of the winter crop in southern Italy.

The town's football club, A.S.D. Montalto Ivrea, currently plays in Promozione Piemonte
Promozione
Promozione is the name of a level of football in Italy. It is considered to be the 7th level in the Italian football league system. Each individual league winner within the Promozione level progresses to their closest regional league in the Eccellenza level...
.