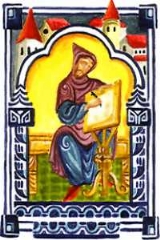 Overview
and Before Christ (abbreviated as BC or B.C.) are designations used to label or number years used with the Julian
Julian calendar
The Julian calendar began in 45 BC as a reform of the Roman calendar by Julius Caesar. It was chosen after consultation with the astronomer Sosigenes of Alexandria and was probably designed to approximate the tropical year .The Julian calendar has a regular year of 365 days divided into 12 months...
and Gregorian calendar
Gregorian calendar
The Gregorian calendar, also known as the Western calendar, or Christian calendar, is the internationally accepted civil calendar. It was introduced by Pope Gregory XIII, after whom the calendar was named, by a decree signed on 24 February 1582, a papal bull known by its opening words Inter...
s.
This calendar era
Calendar era
A calendar era is the year numbering system used by a calendar. For example, the Gregorian calendar numbers its years in the Western Christian era . The instant, date, or year from which time is marked is called the epoch of the era...
is based on the traditionally reckoned year of the conception
Annunciation
The Annunciation, also referred to as the Annunciation to the Blessed Virgin Mary or Annunciation of the Lord, is the Christian celebration of the announcement by the angel Gabriel to Virgin Mary, that she would conceive and become the mother of Jesus the Son of God. Gabriel told Mary to name her...
or birth
Nativity of Jesus
The Nativity of Jesus, or simply The Nativity, refers to the accounts of the birth of Jesus in two of the Canonical gospels and in various apocryphal texts....
of Jesus of Nazareth, with AD counting years after the start of this epoch
Epoch (reference date)
In the fields of chronology and periodization, an epoch is an instance in time chosen as the origin of a particular era. The "epoch" then serves as a reference point from which time is measured...
, and BC denoting years before the start of the epoch.
Alternatively, the secular abbreviations CE and BCE
Common Era
Common Era ,abbreviated as CE, is an alternative designation for the calendar era originally introduced by Dionysius Exiguus in the 6th century, traditionally identified with Anno Domini .Dates before the year 1 CE are indicated by the usage of BCE, short for Before the Common Era Common Era...
are used, respectively.
There is no year zero
Year zero
"Year zero" does not exist in the widely used Gregorian calendar or in its predecessor, the Julian calendar. Under those systems, the year 1 BC is followed by AD 1...
in this scheme, so the year AD 1 immediately follows the year 1 BC.

Does anyone have details about a proposed alternative to the AD-BC:BCE-CE mess. Remember reading about system based on the known 10,000 years of huma...
More
x