Encyclopedia
Dora Baltea ˈdɔːra ˈbaltea or Doire Baltée dwaʁ balte ( or Duria Bautica), is a river in northern Italy
Italy
Italy , officially the Italian Republic languages]] under the European Charter for Regional or Minority Languages. In each of these, Italy's official name is as follows:;;;;;;;;), is a unitary parliamentary republic in South-Central Europe. To the north it borders France, Switzerland, Austria and...
. It is a left-hand tributary
Tributary
A tributary or affluent is a stream or river that flows into a main stem river or a lake. A tributary does not flow directly into a sea or ocean...
of the Po River
Po River
The Po |Ligurian]]: Bodincus or Bodencus) is a river that flows either or – considering the length of the Maira, a right bank tributary – eastward across northern Italy, from a spring seeping from a stony hillside at Pian del Re, a flat place at the head of the Val Po under the northwest face...
, and is about 160 km (99 mi) long. It originates by Mont Blanc
Mont Blanc
Mont Blanc or Monte Bianco , meaning "White Mountain", is the highest mountain in the Alps, Western Europe and the European Union. It rises above sea level and is ranked 11th in the world in topographic prominence...
as the confluence of the Dora di Ferret, fed by the Pré de Bar Glacier in Val Ferret
Val Ferret
Val Ferret is the name of the two valleys departing from the Col Ferret on the border between Italy and Switzerland, on the southern side the Mont Blanc Massif. To the northeast, the Swiss valley, which drains into the Rhône basin; to the southwest, the Italian valley, which drains into the Po...
, and the Dora di Veny, fed by the Miage Glacier
Miage Glacier
The Miage Glacier is a debris-covered glacier in northwestern Italy. It is situated on the southwest flank of the Mont Blanc massif, flowing from Col de Bionnassay into Val Veny. At around in length, it is Italy's longest glacier and also the largest debris-covered glacier in Europe...
in Val Veny
Val Veny
Val Veny is a lateral valley of the Mont Blanc massif, lying to the south-west of Courmayeur. The valley head is at the col de la Seigne, over which lies the Tarentaise Valley.- Geography:...
. 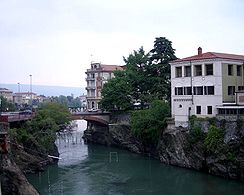 As it crosses the Aosta Valley, the Dora Baltea flows through the city of Aosta
Aosta
Aosta is the principal city of the bilingual Aosta Valley in the Italian Alps, north-northwest of Turin. It is situated near the Italian entrance of the Mont Blanc Tunnel, at the confluence of the Buthier and the Dora Baltea, and at the junction of the Great and Little St. Bernard routes...
(where the Buthier runs into it) and then Saint-Vincent
Saint-Vincent, Italy
Saint-Vincent is a town and comune in the Aosta Valley region of north-western Italy. Saint-Vincent , is a popular summer holiday resort with mineral springs .-Geography:...
. After it enters Piedmont
Piedmont
Piedmont is one of the 20 regions of Italy. It has an area of 25,402 square kilometres and a population of about 4.4 million. The capital of Piedmont is Turin. The main local language is Piedmontese. Occitan is also spoken by a minority in the Occitan Valleys situated in the Provinces of...
, it passes through the city of Ivrea
Ivrea
Ivrea is a town and comune of the province of Turin in the Piedmont region of northwestern Italy. Situated on the road leading to the Aosta Valley , it straddles the Dora Baltea and is regarded as the centre of the Canavese area. Ivrea lies in a basin that, in prehistoric times, formed a great lake...
and a good part of Canavese
Canavese
thumb|250px|Church of Santa Croce at [[Sparone]].Canavese is a subalpine geographical and historical area of north-west Italy which lies today within the Province of Turin in Piedmont. Its main town is Ivrea and it is famous for its castles.-Location:...
, reaching the Po at Crescentino
Crescentino
Crescentino is a comune in the Province of Vercelli in the Italian region Piedmont, located about 35 km northeast of Turin and about 30 km southwest of Vercelli...
, a little downstream from Chivasso
Chivasso
Chivasso is a comune in the Province of Turin in the Italian region Piedmont, located about 20 km northeast of Turin. Chivasso has a population of about 25,000...
.

It is a popular place for whitewater rafting
Rafting
Rafting or white water rafting is a challenging recreational outdoor activity using an inflatable raft to navigate a river or other bodies of water. This is usually done on white water or different degrees of rough water, in order to thrill and excite the raft passengers. The development of this...
and kayaking
Kayaking
Kayaking is the use of a kayak for moving across water. Kayaking and canoeing are also known as paddling. Kayaking is distinguished from canoeing by the sitting position of the paddler and the number of blades on the paddle...
. Early in the summer, in May and June, the rivers are usually high with snow melt from the mountains. During July, August and September the water levels are usually lower and the temperature warmer.
The source of this article is wikipedia, the free encyclopedia.  The text of this article is licensed under the GFDL.