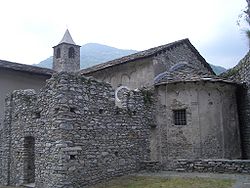 Canavese is a subalpine geographical and historical area of north-west Italy which lies today within the Province of Turin
Province of Turin
The Province of Turin is a province in the Piedmont region of Italy. Its capital is the city of Turin.It has an area of 6,830 km², and a total population of 2,277,686 . There are 315 comuni in the province – the most of any province in Italy...
in Piedmont
Piedmont
Piedmont is one of the 20 regions of Italy. It has an area of 25,402 square kilometres and a population of about 4.4 million. The capital of Piedmont is Turin. The main local language is Piedmontese. Occitan is also spoken by a minority in the Occitan Valleys situated in the Provinces of...
. Its main town is Ivrea
Ivrea
Ivrea is a town and comune of the province of Turin in the Piedmont region of northwestern Italy. Situated on the road leading to the Aosta Valley , it straddles the Dora Baltea and is regarded as the centre of the Canavese area. Ivrea lies in a basin that, in prehistoric times, formed a great lake...
and it is famous for its castles.

To the north it borders on the Aosta Valley and to the east on the provinces of Biella
Province of Biella
The Province of Biella is a province of Italy located in Piedmont. It was created in 1992 and its capital is the city of Biella.It has an area of 913 km², and a total population of 187,249...
and Vercelli
Province of Vercelli
Vercelli is a province in the Piedmont region of northern Italy. Its capital is Vercelli., it has an area of 2,088 km², and a total population of 176,829...
. To the south and west the borders have varied over time but might be taken as being the rivers Stura di Lanzo
Stura di Lanzo
Stura di Lanzo is a 65 km long river in north-western Italy . It is formed from several tributaries near Lanzo Torinese. It flows into the river Po in Turin.The name Stura has Celtic origin: stur, which means "to fall".-External links:...
and Po
Po River
The Po |Ligurian]]: Bodincus or Bodencus) is a river that flows either or – considering the length of the Maira, a right bank tributary – eastward across northern Italy, from a spring seeping from a stony hillside at Pian del Re, a flat place at the head of the Val Po under the northwest face...
. The valley of the river Orco
Orco
The Orco is an Italian river. It originates in the glaciers of the Piedmontese slopes of Gran Paradiso, and after about 90 km reaches the Po River near Chivasso...
and the area around Corio
Corio
Corio may refer to*Corio, Victoria*Division of Corio*Corio, Piedmont, a commune in the province of Turin, northern Italy*Corio, a Dutch real property company...
fall within the Canavese. Turin, however, is entirely excluded.

The first inhabitants of Canavese were the Salassi
Salassi
The Salassi were an Alpine tribe whose lands lay on the Italian side of the Little St Bernard Pass across the Graian Alps to Lyons, and the Great St Bernard Pass over the Pennine Alps...
, a tribe of Celto
Celt
The Celts were a diverse group of tribal societies in Iron Age and Roman-era Europe who spoke Celtic languages.The earliest archaeological culture commonly accepted as Celtic, or rather Proto-Celtic, was the central European Hallstatt culture , named for the rich grave finds in Hallstatt, Austria....
-Ligurian
Ligures
The Ligures were an ancient people who gave their name to Liguria, a region of north-western Italy.-Classical sources:...
roots; the Romans arrived in 22 BCE.

When the Roman Empire
Roman Empire
The Roman Empire was the post-Republican period of the ancient Roman civilization, characterised by an autocratic form of government and large territorial holdings in Europe and around the Mediterranean....
fell, Canavese fell under the domination of Byzantium
Byzantium
Byzantium was an ancient Greek city, founded by Greek colonists from Megara in 667 BC and named after their king Byzas . The name Byzantium is a Latinization of the original name Byzantion...
. It was then conquered by Lombards
Lombards
The Lombards , also referred to as Longobards, were a Germanic tribe of Scandinavian origin, who from 568 to 774 ruled a Kingdom in Italy...
and later by Franks
Franks
The Franks were a confederation of Germanic tribes first attested in the third century AD as living north and east of the Lower Rhine River. From the third to fifth centuries some Franks raided Roman territory while other Franks joined the Roman troops in Gaul. Only the Salian Franks formed a...
.

After the death of Arduino, marquis of Ivrea and the first to bear the title of king of Italy (1015), the Counts of Canavese (who all claimed to be his descendents) shared out the region. This was the beginning of the big families of Canavese: San Martino, Valperga, de Candia, Castellamonte, and later the Biandrate family from Novara
Novara
Novara is the capital city of the province of Novara in the Piedmont region in northwest Italy, to the west of Milan. With c. 105,000 inhabitants, it is the second most populous city in Piedmont after Turin. It is an important crossroads for commercial traffic along the routes from Milan to Turin...
.

The House of Savoy
House of Savoy
The House of Savoy was formed in the early 11th century in the historical Savoy region. Through gradual expansion, it grew from ruling a small county in that region to eventually rule the Kingdom of Italy from 1861 until the end of World War II, king of Croatia and King of Armenia...
started its political expansion in Canavese in the 14th century, and the Commune of Ivrea as well as the Canavese Counts became their subjects.

Canavese is also home to numerous castles of medieval origin, such as those of Ivrea, Parella, Malgrà, Agliè and others.