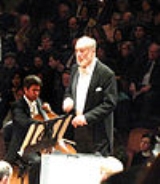 Kurt Masur is a German
Germany
Germany , officially the Federal Republic of Germany , is a federal parliamentary republic in Europe. The country consists of 16 states while the capital and largest city is Berlin. Germany covers an area of 357,021 km2 and has a largely temperate seasonal climate...
conductor
Conducting
Conducting is the art of directing a musical performance by way of visible gestures. The primary duties of the conductor are to unify performers, set the tempo, execute clear preparations and beats, and to listen critically and shape the sound of the ensemble...
, particularly noted for his interpretation of German Romantic music
Romantic music
Romantic music or music in the Romantic Period is a musicological and artistic term referring to a particular period, theory, compositional practice, and canon in Western music history, from 1810 to 1900....
.

Masur conducted the Dresden Philharmonic Orchestra
Dresden Philharmonic Orchestra
The Dresdner Philharmoniker is a symphony orchestra based in Dresden, Germany. The orchestra was founded in 1870 and gave its first concert in the Gewerbehaussaal on 29 November 1870, under the name Gewerbehausorchester. The orchestra acquired its current name in 1915...
for three years ending in 1958 and again from 1967 to 1972. He also worked with the Komische Oper of East Berlin
East Berlin
East Berlin was the name given to the eastern part of Berlin between 1949 and 1990. It consisted of the Soviet sector of Berlin that was established in 1945. The American, British and French sectors became West Berlin, a part strongly associated with West Germany but a free city...
. In 1970, he became Kapellmeister
Kapellmeister
Kapellmeister is a German word designating a person in charge of music-making. The word is a compound, consisting of the roots Kapelle and Meister . The words Kapelle and Meister derive from the Latin: capella and magister...
of the Gewandhausorchester Leipzig, serving in that post until 1996.

In 1991, Masur succeeded Zubin Mehta
Zubin Mehta
Zubin Mehta is an Indian conductor of western classical music. He is the Music Director for Life of the Israel Philharmonic Orchestra.-Biography:...
as music director of the New York Philharmonic
New York Philharmonic
The New York Philharmonic is a symphony orchestra based in New York City in the United States. It is one of the American orchestras commonly referred to as the "Big Five"...
(NYP). During his tenure, there were reports of tension between Masur and the NYP's Executive Director at the time, Deborah Borda
Deborah Borda
Deborah Borda is the President and Chief Executive Officer of the Los Angeles Philharmonic. She joined the Los Angeles Philharmonic Association as Executive Director after serving over eight seasons in the same capacity at the New York Philharmonic....
, which eventually contributed to his contract not being renewed beyond 2002. In a television interview with Charlie Rose
Charlie Rose
Charles Peete "Charlie" Rose, Jr. is an American television talk show host and journalist. Since 1991 he has hosted Charlie Rose, an interview show distributed nationally by PBS since 1993...
, Masur stated that regarding his leaving the NYP, "it was not my wish". The root of the problem was a fundamental discordance in status between the Americas and Germany regarding employed personalities of standing. In the former case, the hired beneficiary is expected "to report" to the benefactor, in the latter, he expects a free hand to execute his tasks as he feels best on account of his (to be) recognized experience. Masur stepped down as the NYP's Music Director in 2002, and was named its Music Director Emeritus, a new title created for him. The critical consensus is that Masur improved the playing of the orchestra compared to his more pliable and forbearing predecessor.

For years, Masur was loyal to the GDR leadership. In 1982, he received the National Prize of East Germany
National Prize of East Germany
The National Prize of the German Democratic Republic was an award of the German Democratic Republic given out in three different classes for scientific, artistic, and other meritorious achievement...
. His attitude to the regime began to change in 1989, after the arrest of a street musician in Leipzig. On October 9, 1989, he intervened in anti-government demonstrations in Leipzig in communist East Germany. He negotiated an end to a confrontation that could have resulted in security forces attacking the protesters as occurred at Tiananmen Square
Tiananmen Square
Tiananmen Square is a large city square in the center of Beijing, China, named after the Tiananmen Gate located to its North, separating it from the Forbidden City. Tiananmen Square is the third largest city square in the world...
.

A professor at the Leipzig Academy of Music since 1975, Masur has received numerous honors: In 1995, he received the Cross of the Order of Merits of the Federal Republic of Germany; in 1996 he received the Gold Medal of Honor for Music from the National Arts Club; in 1997 he received the titles of Commander of the Legion of Honor from the French government and New York City Cultural Ambassador from the City of New York; in April 1999 he received the Commander Cross of Merit of the Polish Republic; in March 2002, the President of Germany, Johannes Rau, awarded him the Cross with Star of the Order of Merits of the Federal Republic of Germany; in September 2007, the President of Germany, Horst Köhler, bestowed upon him the Great Cross of the Legion of Honor with Star and Ribbon; in September 2008, he received the Furtwängler Prize in Bonn, Germany. Masur is also an Honorary Citizen of his hometown Brieg. In 2001 Kurt Masur became an Honorary Member of the Royal Academy of Music
Royal Academy of Music
The Royal Academy of Music in London, England, is a conservatoire, Britain's oldest degree-granting music school and a constituent college of the University of London since 1999. The Academy was founded by Lord Burghersh in 1822 with the help and ideas of the French harpist and composer Nicolas...
. In 2010, he received the Leo Baeck Medal (Leo Baeck Institute
Leo Baeck Institute
The Leo Baeck Institute-New York in Manhattan is a library, archive, and exhibition centre devoted to the study of the history and culture of German-speaking Jewry. The Institutes's offices and collections are housed in Center for Jewish History in New York City...
) for his humanitarian work promoting tolerance and social justice.