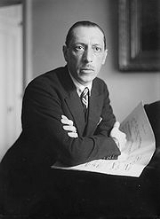 He is widely acknowledged as one of the most important and influential composers of 20th century music.

Does anyone know why, when he died in New York, Stravinsky was buried in the cemetery, San Michele, Venice?

During the period about 1920 to 1951, Stravinsky drew inspiration largely from what?

Why does he become famous at the period of neoclassicism?
More

Why did Igor Stravinsky had to leave Europe
More

"The phenomenon of music is given to us with the sole purpose of establishing an order in things, including, and particularly, the co-ordination between man [sic] and time."

Music's exclusive function is to structure the flow of time and keep order in it.

"One has a nose. The nose scents and it chooses. An artist is simply a kind of pig snouting truffles."

"My music is best understood by children and animals."

"It is the transcendent (or 'abstract' or 'self-contained') nature of music that the new so called concretism--Pop Art, eighteen-hour slices-of-reality films, musique concrete--opposes. But instead of bringing art and reality closer together, the new movement merely thins out the distinction."

"What I cannot follow are the manic-depressive fluctuations from total control to no control, from the serialization of all elements to chance."

"Much of the music is a Merzbild, put together from whatever came to hand. I mean, for example...the Alberti-bass horn solo accompanying the Messenger. I also mean the fusion of such widely divergent types of music as the Folies Bergeres tune at No. 40 ('The girls enter, kicking') and the Wagnerian 7th-chords at Nos. 58 and 74."