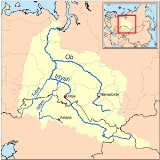 From its origins as the Kara-Irtysh (Black Irtysh) in the Mongolia
Mongolia
Mongolia is a landlocked country in East and Central Asia. It is bordered by Russia to the north and China to the south, east and west. Although Mongolia does not share a border with Kazakhstan, its western-most point is only from Kazakhstan's eastern tip. Ulan Bator, the capital and largest...
n Altay mountains in Xinjiang
Xinjiang
Xinjiang is an autonomous region of the People's Republic of China. It is the largest Chinese administrative division and spans over 1.6 million km2...
, China
China
Chinese civilization may refer to:* China for more general discussion of the country.* Chinese culture* Greater China, the transnational community of ethnic Chinese.* History of China* Sinosphere, the area historically affected by Chinese culture...
, the Irtysh flows north-west through Lake Zaysan
Lake Zaysan
Lake Zaysan is a freshwater lake, ca. 1,810 km² , in eastern Kazakhstan, in a hollow between the Altai and Tarbagatai Mountains. It is the largest lake in the East Kazakhstan Province....
in Kazakhstan
Kazakhstan
Kazakhstan , officially the Republic of Kazakhstan, is a transcontinental country in Central Asia and Eastern Europe. Ranked as the ninth largest country in the world, it is also the world's largest landlocked country; its territory of is greater than Western Europe...
, meeting the Ishim
Ishim River
Ishim River is a river running through Kazakhstan and Russia. Its length is 2,450 km , average discharge is 56,3 m³/s . It is a left tributary of the Irtysh River. The Ishim River is partly navigable in its lower reaches. The upper course of the Ishim passes through Astana, the capital of Kazakhstan...
and Tobol rivers before merging with the Ob near Khanty-Mansiysk
Khanty-Mansiysk
Khanty-Mansiysk experiences a subarctic climate . The climate is extreme, with temperatures as low as -49 C° and as high as 34.5 C°. On average, however, the region is very cold, with an average tempurature of -1.1 C°...
in western Siberia, Russia
Russia
Russia or , officially known as both Russia and the Russian Federation , is a country in northern Eurasia. It is a federal semi-presidential republic, comprising 83 federal subjects...
after 4248 kilometres (2,639.6 mi).

Tankers and passenger and freight boats navigate the river between April and October, when it does not freeze over. Omsk
Omsk
-History:The wooden fort of Omsk was erected in 1716 to protect the expanding Russian frontier along the Ishim and the Irtysh rivers against the Kyrgyz nomads of the Steppes...
, home to the headquarters of the state-owned Irtysh River Shipping Company, functions as the largest river-port in Western Siberia. Major hydroelectric
Hydroelectricity
Hydroelectricity is the term referring to electricity generated by hydropower; the production of electrical power through the use of the gravitational force of falling or flowing water. It is the most widely used form of renewable energy...
plants at Ust-Kamenogorsk and Bakhtarminsk
Bukhtarminskaya Hydro Power Plant
The Bukhtarma Hydroelectric Power Plant is a hydroelectric power plant on the Irtysh River 5 km upstream of the town of Serebryansk, in East Kazakhstan Province of Kazakhstan. It has 9 individual turbines with a total generating capacity of 750 megawatts and generates...
use the Irtysh near the Kazakhstan-Chinese border. The world's deepest lock
Lock (water transport)
A lock is a device for raising and lowering boats between stretches of water of different levels on river and canal waterways. The distinguishing feature of a lock is a fixed chamber in which the water level can be varied; whereas in a caisson lock, a boat lift, or on a canal inclined plane, it is...
, with a drop of 42 metres, allows river traffic to by-pass the dam
Dam
A dam is a barrier that impounds water or underground streams. Dams generally serve the primary purpose of retaining water, while other structures such as floodgates or levees are used to manage or prevent water flow into specific land regions. Hydropower and pumped-storage hydroelectricity are...
at Ust-Kemenogorsk.

Some of the Northern river reversal
Northern river reversal
The Northern river reversal or Siberian river reversal was an ambitious project to divert the flow of the Northern rivers in the Soviet Union, which "uselessly" drain into the Arctic Ocean, southwards towards the populated agricultural areas of Central Asia, which lack water.Research and planning...
proposals, widely discussed in the 1960s and 1970s, would have seen the direction of flow of the Irtysh reversed so as to supply water to central Kazakhstan and Uzbekistan
Uzbekistan
Uzbekistan , officially the Republic of Uzbekistan is a doubly landlocked country in Central Asia and one of the six independent Turkic states. It shares borders with Kazakhstan to the west and to the north, Kyrgyzstan and Tajikistan to the east, and Afghanistan and Turkmenistan to the south....
. While these gigantic water management schemes were not implemented, a smaller Irtysh-Karaganda irrigation canal
Canal
Canals are man-made channels for water. There are two types of canal:#Waterways: navigable transportation canals used for carrying ships and boats shipping goods and conveying people, further subdivided into two kinds:...
was built between 1962 and 1974 to supply water to the dry Kazakh steppe
Steppe
In physical geography, steppe is an ecoregion, in the montane grasslands and shrublands and temperate grasslands, savannas, and shrublands biomes, characterized by grassland plains without trees apart from those near rivers and lakes...
s and to one of the country's main industrial centers, Karaganda
Karaganda
Karagandy , more commonly known by its Russian name Karaganda, , is the capital of Karagandy Province in Kazakhstan. It is the fourth most populous city in Kazakhstan, behind Almaty , Astana and Shymkent, with a population of 471,800 . In the 1940s up to 70% of the city's inhabitants were ethnic...
. In 2002, pipelines were constructed to supply water from the canal to the Ishim River and Kazakhstan's capital, Astana
Astana
Astana , formerly known as Akmola , Tselinograd and Akmolinsk , is the capital and second largest city of Kazakhstan, with an officially estimated population of 708,794 as of 1 August 2010...
.

In the 2000s, projects for diverting a significant amounts of Irtysh water within China, such as the proposed Black Irtysh - Karamai Canal, have been decried by Kazakh and Russian environmentalists.

A number of Mongol
Mongols
Mongols ) are a Central-East Asian ethnic group that lives mainly in the countries of Mongolia, China, and Russia. In China, ethnic Mongols can be found mainly in the central north region of China such as Inner Mongolia...
and Turkic peoples occupied the river banks for many centuries. In the 15th and 16th centuries the lower and middle courses of the Irtysh lay within the Tatar Khanate of Sibir, which the Russians conquered
Conquest of the Khanate of Sibir
The Khanate of Sibir was a Muslim state located just east of the middle Ural Mountains. Its conquest by Ermak in 1582 was the first event in the Russian conquest of Siberia.-Russia:...
in the 1580s. In the 17th century the Zunghar Khanate
Zunghar Khanate
The Zunghar Khanate was a nomadic power on the Eurasian steppe. It covered the area called Dzungaria and stretched from the west end of the Great Wall of China to present-day eastern Kazakhstan, and from present-day northern Kyrgyzstan to southern Siberia .In 1678 Galdan received from the Dalai...
, formed by the Mongol Oirat
Oirats
Oirats are the westernmost group of the Mongols who unified several tribes origin whose ancestral home is in the Altai region of western Mongolia. Although the Oirats originated in the eastern parts of Central Asia, the most prominent group today is located in the Republic of Kalmykia, a federal...
people, became Russia's southern neighbor, and controlled the upper Irtysh. The Russians founded the cities of Omsk
Omsk
-History:The wooden fort of Omsk was erected in 1716 to protect the expanding Russian frontier along the Ishim and the Irtysh rivers against the Kyrgyz nomads of the Steppes...
in 1716, Semipalatinsk in 1718, Ust-Kamenogorsk in 1720, and Petropavl
Petropavl
Petropavl is a city on the Ishim River in North Kazakhstan Province of Kazakhstan close to the border with Russia, about 261 km west of Omsk along the Trans-Siberian Railway. It is capital of the North Kazakhstan Province...
ovsk in 1752.

The Chinese Qing Empire conquered the Zunghar state in the 1750s. The border between the Russian and the Qing empires (the present border between Russia and Kazakhstan in the north and Mongolia and China in the south) was settled in the early 19th century.


Cities along the river

The main cities on the Irtysh, from source to mouth, are: