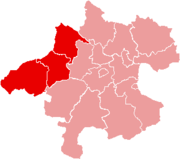 Located within the Alpine foothills, the rural Innviertel is approximately 2250 km² in area and comprises the broad Inn valley, which is largely flat and fertile, and the adjacent undulating landscape in the east, which is rich in granite
Granite
Granite is a common and widely occurring type of intrusive, felsic, igneous rock. Granite usually has a medium- to coarse-grained texture. Occasionally some individual crystals are larger than the groundmass, in which case the texture is known as porphyritic. A granitic rock with a porphyritic...
in the north and coal
Coal
Coal is a combustible black or brownish-black sedimentary rock usually occurring in rock strata in layers or veins called coal beds or coal seams. The harder forms, such as anthracite coal, can be regarded as metamorphic rock because of later exposure to elevated temperature and pressure...
.

Since the Early Middle Ages
Early Middle Ages
The Early Middle Ages was the period of European history lasting from the 5th century to approximately 1000. The Early Middle Ages followed the decline of the Western Roman Empire and preceded the High Middle Ages...
the region had belonged to the German stem duchy
Stem duchy
Stem duchies were essentially the domains of the old German tribes of the area, associated with the Frankish Kingdom, especially the East, in the Early Middle Ages. These tribes were originally the Franks, the Saxons, the Alamanni, the Burgundians, the Thuringii, and the Rugii...
of Bavaria
History of Bavaria
The history of Bavaria stretches from its earliest settlement and its formation as a stem duchy in the 6th century through its inclusion in the Holy Roman Empires to its status as an independent kingdom and, finally, as a large and significant Bundesland of the modern Federal Republic of...
and was called Innbaiern. Administered from the town of Burghausen
Burghausen, Altötting
Burghausen is the largest city in the Altötting district of Oberbayern in Germany. It is situated on the Salzach river, near the border with Austria. Its castle, atop a ridge, is the longest castle in Europe .- History :...
, the lands beyond the Inn river for centuries had two important roles: strategically as an eastern defence line against the rising Archduchy of Austria
Archduchy of Austria
The Archduchy of Austria , one of the most important states within the Holy Roman Empire, was the nucleus of the Habsburg Monarchy and the predecessor of the Austrian Empire...
, and economically as arable land
Arable land
In geography and agriculture, arable land is land that can be used for growing crops. It includes all land under temporary crops , temporary meadows for mowing or pasture, land under market and kitchen gardens and land temporarily fallow...
for crop
Crop
Crop may refer to:* Crop, a plant grown and harvested for agricultural use* Crop , part of the alimentary tract of some animals* Crop , a modified whip used in horseback riding or disciplining humans...
farming. In the course of the Bavarian People's Uprising
Bavarian People's Uprising
The Bavarian People's Uprising, or Bavarian Popular Uprising is the name of a revolt in 1705-06 against the Austrian occupation during the War of Spanish Succession . It lasted from early November 1705 to 18 January 1706, approximately 75 days. Henric L...
against the occupation by the Habsburg Emperor Joseph I
Joseph I, Holy Roman Emperor
Joseph I , Holy Roman Emperor, King of Bohemia, King of Hungary, King of the Romans was the elder son of Emperor Leopold I and his third wife, Eleonor Magdalene of Neuburg....
, the short-lived Braunau Parliament convened in 1705, an early occurrence of a parliamentary system
Parliamentary system
A parliamentary system is a system of government in which the ministers of the executive branch get their democratic legitimacy from the legislature and are accountable to that body, such that the executive and legislative branches are intertwined....
in the Holy Roman Empire
Holy Roman Empire
The Holy Roman Empire was a realm that existed from 962 to 1806 in Central Europe.It was ruled by the Holy Roman Emperor. Its character changed during the Middle Ages and the Early Modern period, when the power of the emperor gradually weakened in favour of the princes...
.

Following the War of the Bavarian Succession and the Treaty of Teschen
Treaty of Teschen
The Treaty of Teschen was signed on May 13, 1779, in Cieszyn , Austrian Silesia, between Austria and Prussia, which officially ended the War of the Bavarian Succession sparked by the death of Elector Maximilian III Joseph...
in 1779 it was ceded to Austria. During the Napoleonic Wars
Napoleonic Wars
The Napoleonic Wars were a series of wars declared against Napoleon's French Empire by opposing coalitions that ran from 1803 to 1815. As a continuation of the wars sparked by the French Revolution of 1789, they revolutionised European armies and played out on an unprecedented scale, mainly due to...
it was once again restored to Bavaria after the 1809 Treaty of Schönbrunn
Treaty of Schönbrunn
The Treaty of Schönbrunn , sometimes known as the Treaty of Vienna, was signed between France and Austria at the Schönbrunn Palace of Vienna on 14 October 1809. This treaty ended the Fifth Coalition during the Napoleonic Wars...
, but finally attached to the Austrian Empire
Austrian Empire
The Austrian Empire was a modern era successor empire, which was centered on what is today's Austria and which officially lasted from 1804 to 1867. It was followed by the Empire of Austria-Hungary, whose proclamation was a diplomatic move that elevated Hungary's status within the Austrian Empire...
in 1816 according to the Final Act of the Vienna Congress
Congress of Vienna
The Congress of Vienna was a conference of ambassadors of European states chaired by Klemens Wenzel von Metternich, and held in Vienna from September, 1814 to June, 1815. The objective of the Congress was to settle the many issues arising from the French Revolutionary Wars, the Napoleonic Wars,...
.

Today the Innviertel has about 200,000 people in its towns, villages and hamlets. Its Bavarian roots show in the local German
German language
German is a West Germanic language, related to and classified alongside English and Dutch. With an estimated 90 – 98 million native speakers, German is one of the world's major languages and is the most widely-spoken first language in the European Union....
dialect, Innviertlerisch, a Western Central Austro-Bavarian
Central Austro-Bavarian
The Central Bavarian Germanic dialects forming a subgroup of the Bavarian dialects. The subgroup covers all dialects spoken along the rivers Isar and Danube, on the northern side of the Alps....
variant similar to the languages spoken in adjacent Lower Bavaria
Lower Bavaria
Lower Bavaria is one of the seven administrative regions of Bavaria, Germany, located in the east of the state.- Geography :Lower Bavaria is subdivided into two regions - Landshut and Donau-Wald. Recent election results mark it as the most conservative part of Germany, generally giving huge...
.

The Innviertel is the birth place of the physicist Anton Zeilinger
Anton Zeilinger
Anton Zeilinger is an Austrian quantum physicist. He is currently professor of physics at the University of Vienna, previously University of Innsbruck. He is also the director of the Vienna branch of the Institute for Quantum Optics and Quantum Information IQOQI at the Austrian Academy of Sciences...
, of Franz Xaver Gruber, the composer of the Silent Night
Silent Night
"Silent Night" is a popular Christmas carol. The original lyrics of the song "Stille Nacht" were written in Oberndorf bei Salzburg, Austria, by the priest Father Joseph Mohr and the melody was composed by the Austrian headmaster Franz Xaver Gruber...
Christmas carol, of the Schwanthaler
Schwanthaler
Schwanthaler:* The Schwanthaler Family of Ried im Innkreis** Ludwig Schwanthaler...
family of Baroque sculptors, but also of the SS official Ernst Kaltenbrunner
Ernst Kaltenbrunner
Ernst Kaltenbrunner was an Austrian-born senior official of Nazi Germany during World War II. Between January 1943 and May 1945, he held the offices of Chief of the Reichssicherheitshauptamt , President of Interpol and, as a Obergruppenführer und General der Polizei und Waffen-SS, he was the...
and the conscientious objector Franz Jägerstätter
Franz Jägerstätter
Blessed Franz Jägerstätter, O.F.S., was an Austrian conscientious objector during World War II. Jägerstätter was sentenced to death and executed...
. Adolf Hitler
Adolf Hitler
Adolf Hitler was an Austrian-born German politician and the leader of the National Socialist German Workers Party , commonly referred to as the Nazi Party). He was Chancellor of Germany from 1933 to 1945, and head of state from 1934 to 1945...
was born at the border town of Braunau am Inn
Braunau am Inn
Braunau am Inn is a town in the Innviertel region of Upper Austria , the north-western state of Austria. It lies about 90 km west of Linz and about 60 km north of Salzburg, on the border with the German state of Bavaria. The population in 2001 was 16,372...
, as well as the diplomat Egon Ranshofen-Wertheimer
Egon Ranshofen-Wertheimer
Egon Ranshofen-Wertheimer was a diplomat, journalist, doctor of laws and state.-Early life:...
.
The source of this article is wikipedia, the free encyclopedia.  The text of this article is licensed under the GFDL.