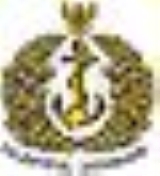 Encyclopedia
The role of the Indonesian Navy is to patrol of Indonesia
Indonesia
Indonesia , officially the Republic of Indonesia , is a country in Southeast Asia and Oceania. Indonesia is an archipelago comprising approximately 13,000 islands. It has 33 provinces with over 238 million people, and is the world's fourth most populous country. Indonesia is a republic, with an...
's immense coastline, to ensure safeguard the territorial waters and Exclusive Economic Zone (EEZ), to protect Indonesia's maritime strategic interests, to protect the islands surrounded Indonesia and to defend against seaborne threats. The TNI AL is the largest navy in the region of South East Asia. It currently aims to become the most technologically advanced navies in the region.

All commissioned ships of the TNI-AL have the prefix KRI (in Indonesian, Kapal Perang Republik Indonesia), which means Republic of Indonesia warship. The Indonesian Navy at the moment has about 74,000 active personnel and more than 150 naval warships including attack submarines.

The Indonesian Navy was formed on August 22, 1945. It was formed as the Agency of the People’s Security Sea Service (Badan Keamanan Rakyat-Laut). Later on October 5, 1945, BKR Laut became known as Angkatan Laut Republik Indonesia (ALRI). This was later changed to Tentara Nasional Indonesia Angkatan Laut (TNI-AL) in the 1970s.

Total personnel of the Indonesian Navy was estimated at 74,000 in 2008. The Indonesian Navy purchased a number of ships of the Parchim, Frosch and Kondor Class from the former East German Navy
Volksmarine
Volksmarine was the official designation of the maritime forces of the German Democratic Republic . It was part of the National People's Army, established in 1956.-History:...
in the 1990s. Navy vessels include KRI Cobra
KRI Cobra
KRI Cobra, alternatively KRI Kobra, is an Indonesian naval vessel of the Waigeo class patrol boats.-Notable deployments:Cobra helped recover 22 of the bodies of the deceased from the Levina 1....
and others. In 2006, Indonesian Navy purchased 2 sets of Yakhont missiles and 20 BMP-3F amphibious light tanks with option of 100 more BMP-3
BMP-3
The BMP-3 is a Russian amphibious infantry fighting vehicle, successor to the BMP-1 and BMP-2. BMP stands for Boyevaya Mashina Pekhoty .- Production history :...
from Russia. Indonesia also plans to buy landing craft from Russia.

The Indonesian Navy is modernizing its fleet. New corvettes ordered from Netherlands are being added. The Navy also plans to induct 60 patrol vessels within a decade to maintain adequate force level while replacing obsolete ships in service. This will help in the fight against sea piracy and other maritime crime.

The navy comprises the following:

Plans exist to have a single HQ at Surabaya, with commands at Riau (West), Papua (East), and Makassar
Makassar
Makassar, is the provincial capital of South Sulawesi, Indonesia, and the largest city on Sulawesi Island. From 1971 to 1999, the city was named Ujung Pandang, after a precolonial fort in the city, and the two names are often used interchangeably...
(Central).


Ships of the Indonesian Navy 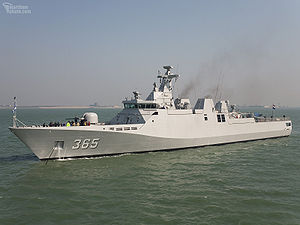 The majority of the vessels in the Indonesian navy are from the Netherlands and Britain. However, since 2003, Indonesian shipyards have producde many of their own small vessels, in particular those of smaller displacement like patrol boats and fast attack crafts. Recently, two Makassar class LPDs have been launched by PT. PAL, with assistance from Daewoo Shipbuilding & Marine Engineering Co.(DSME) of South Korea
South Korea
The Republic of Korea , , is a sovereign state in East Asia, located on the southern portion of the Korean Peninsula. It is neighbored by the People's Republic of China to the west, Japan to the east, North Korea to the north, and the East China Sea and Republic of China to the south...
, and there are a plans to build indigenous missile-armed corvettes (Kornas).

In the 1960s, the Indonesian Navy Naval Aviation had a long-range strike capability with Indonesian Navy had Il-28
Il-28
IL28 or IL-28 may be:* Ilyushin Il-28, a Cold War era Soviet ground attack aircraft* Interleukin 28, a cytokine for stimulating the growth of T cell lymphocytes...
medium bombers. In 1975-79, the Dinas Penerbangan Angkatan Laut (Naval Aviation Service) received 12 GAF Nomad Searchmaster B's and six Searchmaster L twin-turboprops to form a maritime patrol Squadron (800 Skwadron). In mid 1996 six NC.212-MPAs also join the squadron. All aircraft fly from the Naval headquarters base of Surabaya, but detachments are at times sent to Tanjung pinang and Manado.

|
| Basic Prop Trainer
| TB-9 Tampico GT
----
TB-10 Tobago GT
| 4
----
5
|
|-
! style="align: center; background: lavender;" colspan="8" | Transport Aircraft
Military transport aircraft
Military transport aircraft are typically fixed and rotary wing cargo aircraft which are used to deliver troops, weapons and other military equipment by a variety of methods to any area of military operations around the surface of the planet, usually outside of the commercial flight routes in...

|
| VIP Transport
| DHC-5D Buffalo
| 2
|
|-
| GAF Nomad
GAF Nomad
The GAF Nomad is a twin-engine turboprop, high-winged, "short take off and landing" aircraft . It was designed and built by the Australian Government Aircraft Factories at Fishermens Bend, Melbourne. Major users of the design have included the Royal Flying Doctor Service of Australia, the...

|-
| Bell 412
Bell 412
The Bell 412 is a utility helicopter manufactured by Bell Helicopter. It is a development of the Bell 212 model, the major difference being the composite four-blade main rotor.-Design and development:...

The Korps Marinir are the Indonesia
Indonesia
Indonesia , officially the Republic of Indonesia , is a country in Southeast Asia and Oceania. Indonesia is an archipelago comprising approximately 13,000 islands. It has 33 provinces with over 238 million people, and is the world's fourth most populous country. Indonesia is a republic, with an...
n Navy
Navy
A navy is the branch of a nation's armed forces principally designated for naval and amphibious warfare; namely, lake- or ocean-borne combat operations and related functions...
's ground troops
Marine corps
A marine is a member of a force that specializes in expeditionary operations such as amphibious assault and occupation. The marines traditionally have strong links with the country's navy...
. It was created on November 15, 1945 and has the duties of being the main amphibious warfare
Amphibious warfare
Amphibious warfare is the use of naval firepower, logistics and strategy to project military power ashore. In previous eras it stood as the primary method of delivering troops to non-contiguous enemy-held terrain...
force and quick reaction force of defence against enemy invasion.

In 2009 President Susilo Bambang Yudhoyono allocated 70billion rupiah for an helicopter carrier, to be built by PT. PAL - Indonesia.

In April 2011, PT PAL, in cooperation with Netherlands' Naval Shipbuilding, started designing a new light corvette for ASW purposes. It will be the largest warship built by PT PAL.

At the same time, Indonesian Navy has accepted a grant of 2 used patrol boats equipped with guided missiles made in Britain from Brunei
Brunei
Brunei , officially the State of Brunei Darussalam or the Nation of Brunei, the Abode of Peace , is a sovereign state located on the north coast of the island of Borneo, in Southeast Asia...
after upgrading itself with newer vessels.

April 2011: The State-owned Bank Mandiri
Bank Mandiri
Bank Mandiri , headquartered in Jakarta, is the largest bank in Indonesia in term of assets, loans and deposits. Total assets as of Q2 2010 were IDR 402.1 trillion . It also has Capital Adequacy Ratio of 23% , Return on Asset of 0.71 %, and Return on Equity of 7.38 %...
finances constructions of two 40-meter fast missile boats (Kapal Cepat Rudal - KCR-40s), worth Rp.65,97 billion (about $7.65 million). It is to be designed and built solely locally.
The KCR-40s will operate in Indonesia's western waters which are geographically dotted by small islands and divided by straits.

June 2011: After rejecting the Russian submarine offering, due to the fact of being too big for an archipelagic country, Indonesia will pick one of three countries offering: French
France
The French Republic , The French Republic , The French Republic , (commonly known as France , is a unitary semi-presidential republic in Western Europe with several overseas territories and islands located on other continents and in the Indian, Pacific, and Atlantic oceans. Metropolitan France...
Scorpene, Germany
Germany
Germany , officially the Federal Republic of Germany , is a federal parliamentary republic in Europe. The country consists of 16 states while the capital and largest city is Berlin. Germany covers an area of 357,021 km2 and has a largely temperate seasonal climate...
U-209 and South Korea
South Korea
The Republic of Korea , , is a sovereign state in East Asia, located on the southern portion of the Korean Peninsula. It is neighbored by the People's Republic of China to the west, Japan to the east, North Korea to the north, and the East China Sea and Republic of China to the south...
similar class with U-209.

July 2011: Indonesia will build 2 submarine
Submarine
A submarine is a watercraft capable of independent operation below the surface of the water. It differs from a submersible, which has more limited underwater capability...
s in 2012. One will be built jointly with another country and one more by PT PAL, Surabaya
Surabaya
Surabaya is Indonesia's second-largest city with a population of over 2.7 million , and the capital of the province of East Java...
.