Encyclopedia
The Mil
Mil Moscow Helicopter Plant
Mil Helicopters is the short name of the Soviet Russian helicopter producer Mil Moscow Helicopter Plant , named after the constructor Mikhail Mil. Mil participates in the Euromil joint venture with Eurocopter....
Mi-2 (NATO reporting name
NATO reporting name
NATO reporting names are classified code names for military equipment of the Eastern Bloc...
is Hoplite) is a small, lightly armored transport helicopter that could also provide close air support
Close air support
In military tactics, close air support is defined as air action by fixed or rotary winged aircraft against hostile targets that are close to friendly forces, and which requires detailed integration of each air mission with fire and movement of these forces.The determining factor for CAS is...
when armed with 57 mm rockets and a 23 mm cannon.

The Mi-2 was produced exclusively in Poland
Poland
Poland , officially the Republic of Poland , is a country in Central Europe bordered by Germany to the west; the Czech Republic and Slovakia to the south; Ukraine, Belarus and Lithuania to the east; and the Baltic Sea and Kaliningrad Oblast, a Russian exclave, to the north...
, in the WSK "PZL-Świdnik"
PZL-Swidnik
PZL Świdnik S.A is the biggest helicopter manufacturer in Poland. Its main products are PZL W-3 Sokół and PZL SW-4 Puszczyk helicopters...
factory in Świdnik
Swidnik
Świdnik is a town in eastern Poland with 42,797 inhabitants , situated in the Lublin Voivodeship, very near the city of Lublin. It is the capital of Świdnik County.-History:The village of Świdnik is first mentioned in historical records from 1392...
. Production ended in 1985
1985 in aviation
This is a list of aviation-related events from 1985: 1985 was the worst year in history for aviation disasters, among the crashes were Delta Air Lines Flight 191, killing 137 people, Japan Airlines Flight 123 killing 520 people, British Airtours Flight 28M, killing 55, Iberia Airlines Flight 610...
after about 7,200 were made.

The first production helicopter in the Soviet Union was the Mil Mi-1
Mil Mi-1
The Mil Mi-1 The Mil Mi-1 The Mil Mi-1 ( (USAF/DoD reporting name "Type 32", NATO reporting name "Hare") was a Soviet three- or four-seat light utility helicopter. It was the first Soviet helicopter to enter serial production. It is powered by one 575 hp Ivchenko AI-26V radial. It entered...
, modelled along the lines of the S-51 and Bristol Sycamore
Bristol Sycamore
-See also:-External links:* on the Bristol Sycamore* on the Bristol Sycamore*...
and flown by Mikhail Mil
Mikhail Mil
Mikhail Leontyevich Mil ; 22 November 1909 - 31 January 1970 was a Soviet aerospace engineer. He was founder of the Mil Moscow Helicopter Plant, which is responsible for many well-known Soviet helicopter models.-Biography:...
's bureau in September 1948. During the 1950s it became evident, and confirmed by American and French development, that helicopters could be greatly improved with turbine engines. S. P. Isotov developed the GTD-350 engine and Mil used two of these in the far superior Mi-2. After initial development at the Mil bureau (Soviet designation V-2) this was transferred to Poland in 1964, after the first Świdnik-built example had flown. PZL-Świdnik
PZL-Swidnik
PZL Świdnik S.A is the biggest helicopter manufacturer in Poland. Its main products are PZL W-3 Sokół and PZL SW-4 Puszczyk helicopters...
has since delivered many hundreds, possibly one-third of them to military customers, and developed plastic rotor blades and the wide-body Mi-2M seating 10 passengers instead of eight. Most typical role kits include four stretchers, as air ambulance
Air ambulance
An air ambulance is an aircraft used for emergency medical assistance in situations where either a traditional ambulance cannot reach the scene easily or quickly enough, or the patient needs to be transported over a distance or terrain that makes air transportation the most practical transport....
, or aerospraying or cropdusting device.

In Poland, there were also developed several specialized military variants, first of all support or reconnaissance ones, with 23 mm autocannon
Autocannon
An autocannon or automatic cannon is a rapid-fire projectile weapon firing a shell as opposed to the bullet fired by a machine gun. Autocannons often have a larger caliber than a machine gun . Usually, autocannons are smaller than a field gun or other artillery, and are mechanically loaded for a...
, machine guns and/or two 57 mm rocket pods, four 9K11 Malyutka anti-tank missiles or Strela-2 AA missiles.

It was first introduced into the Soviet Air Force
Soviet Air Force
The Soviet Air Force, officially known in Russian as Военно-воздушные силы or Voenno-Vozdushnye Sily and often abbreviated VVS was the official designation of one of the air forces of the Soviet Union. The other was the Soviet Air Defence Forces...
in 1965
1965 in aviation
This is a list of aviation-related events from 1965:-January:* January 2 - Denis Healey, the United Kingdoms Secretary of Defence, cancels the nation's fighter and military transport programmes and orders the purchase of the US-built F-4 Phantom and C-130 Hercules in their place.* January 26 -...
. The Mi-2 is used by mainly former Soviet
Soviet Union
The Soviet Union , officially the Union of Soviet Socialist Republics , was a constitutionally socialist state that existed in Eurasia between 1922 and 1991....
and Eastern Bloc
Eastern bloc
The term Eastern Bloc or Communist Bloc refers to the former communist states of Eastern and Central Europe, generally the Soviet Union and the countries of the Warsaw Pact...
countries, although it is used by Mexico
Mexican Air Force
The Mexican Air Force is the aviation branch of the Mexican Army and depends on the National Defense Secretariat . Since 2008, its commander is Gen...
and Myanmar
Myanmar
Burma , officially the Republic of the Union of Myanmar , is a country in Southeast Asia. Burma is bordered by China on the northeast, Laos on the east, Thailand on the southeast, Bangladesh on the west, India on the northwest, the Bay of Bengal to the southwest, and the Andaman Sea on the south....
as well.

Most of armed Mi-2 variants were used by Poland
Poland
Poland , officially the Republic of Poland , is a country in Central Europe bordered by Germany to the west; the Czech Republic and Slovakia to the south; Ukraine, Belarus and Lithuania to the east; and the Baltic Sea and Kaliningrad Oblast, a Russian exclave, to the north...
. Some were also used by the former East Germany (with machine gun and unguided rocket armament only).

North Korea
North Korea
The Democratic People’s Republic of Korea , , is a country in East Asia, occupying the northern half of the Korean Peninsula. Its capital and largest city is Pyongyang. The Korean Demilitarized Zone serves as the buffer zone between North Korea and South Korea...
still maintains a large active fleet of Mi-2s. In the event of a war with the ROK
RoK
RoK is a three-letter acronym. It can refer to:* Republic of Korea * Realms of Kaos, a roleplaying game* EverQuest: The Ruins of Kunark, an Everquest expansion* EverQuest II: Rise of Kunark, an Everquest II expansion...
, the primary mission of the 200+ aircraft would be the insertion of nK SOF forces behind enemy lines. These SOF forces would be tasked with opening the "second front" against the allied forces, in order to disrupt their ability to counter the nK invasion. The life-expectancy for the Mi-2s would be short, and many would likely not return from their initial mission.


Mi-2RS Padalec
Anguis fragilis
Anguis fragilis, or slow worm, slow-worm or slowworm, is a limbless reptile native to Eurasia. It is also sometimes referred to as the blindworm or blind worm, though the Royal Society for the Protection of Birds considers this to be incorrect.Slow worms are semi-fossorial lizards spending much...

Armed version fitted with a fixed 23mm NS-23
Nudelman-Suranov NS-23
The NS-23 was a aircraft cannon designed by A. E. Nudelman, A. Suranov, G. Zhirnykh, V. Nemenov, S. Lunin, and M. Bundin during World War II as a replacement for the Volkov-Yartsev VYa-23 cannon. It entered service in 1944...
cannon, 4 x 7,62mm PKT
PK machine gun
The PK is a 7.62 mm general-purpose machine gun designed in the Soviet Union and currently in production in Russia. The PK machine gun was introduced in the 1960s and replaced the SGM and RPD machine guns in Soviet service...
machine gun pods and optional cabin PK machine gun.


Mi-2URN Żmija ('Viper
Viperidae
The Viperidae are a family of venomous snakes found all over the world, except in Antarctica, Australia, Ireland, Madagascar, Hawaii, various other isolated islands, and above the Arctic Circle. All have relatively long, hinged fangs that permit deep penetration and injection of venom. Four...
')


Mi-2URP Salamandra ('Salamander
Salamander
Salamander is a common name of approximately 500 species of amphibians. They are typically characterized by a superficially lizard-like appearance, with their slender bodies, short noses, and long tails. All known fossils and extinct species fall under the order Caudata, while sometimes the extant...
')

Gunship and anti-tank variant, armed with 23mm NS-23 gun, optional window-mounted 7,62mm PK machine gun, and 4x AT-3 Sagger
AT-3 Sagger
The 9K11 Malyutka is a Manual Command to Line-of-Sight wire-guided anti-tank guided missile developed in the Soviet Union. It was the first man-portable anti-tank guided missile of the Soviet Union and is probably the most widely produced ATGM of all time—with Soviet production peaking at...
(9M14M Malutka) wire-guided missiles on external weapons racks and 4x additional missiles in the cargo compartment.


Mi-3
Mil Mi-3
The Mil Mi-3 was a Soviet light-utility helicopter originally designed in the 1960s as a heavier and larger version of the Mil Mi-2 helicopter. It is also a Russian designation for the Polish-Soviet co-operation on larger helicopters based on the Mi-2 that could replace the Mi-4 from 1971. The...

Planned Mi-2 derivative that lacked suitable engines for the program to continue. 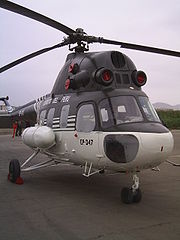 : Passed on to successor states.