Can any1 whr d base paper of bmp-2 for final year project ????
More

The design of the BMP-3 or Obyekt 688M can be traced back to the Obyekt 685 light tank prototype with 100 mm gun 2A48-1 from 1975. This vehicle didn't enter series production but the chassis, with a new engine, was used for the next-generation infantry combat vehicle Obyekt 688 from A. Blagonravov's design bureau. The Ob. 688 weapons configuration—an externally-mounted 30 mm gun and twin Konkurs ATGM launcher—was rejected; instead the new 2K23 armament system was selected. The resulting BMP-3 was developed in the early 1980s and entered service with the Soviet army officially in 1987. It was shown for the first time in public during the 1990 May Day parade and was given the NATO code IFV M1990/1.

The BMP-3 is designed and produced by the Kurgan Machine Building Plant (Kurganmashzavod - KMZ)
Kurganmashzavod
JSC Kurganmashzavod is a manufacturing company based in Kurgan, Russia. It is known for its BMP series of infantry fighting vehicles.- Overview :...
, some variants however are build by the Rubtsovsk
Rubtsovsk
Rubtsovsk is a city in Altai Krai, Russia, located on the Aley River southwest of Barnaul. Population: 167,000 ; 111,000 ; 38,000 ....
Machine Building Plant (RMZ), for example the BRM-3K.

The BMP-3 is one of the most heavily armed infantry combat vehicles in service, fitted with a low-velocity 2A70 100mm rifled gun, which can fire conventional shells or ATGMs 9M117 (AT-10 Stabber) (40 100mm rounds and 8 ATGMs are carried), a 2A72 30mm dual feed autocannon
Autocannon
An autocannon or automatic cannon is a rapid-fire projectile weapon firing a shell as opposed to the bullet fired by a machine gun. Autocannons often have a larger caliber than a machine gun . Usually, autocannons are smaller than a field gun or other artillery, and are mechanically loaded for a...
with 500 rounds and a rate of fire of 350 to 400 RPM, and a 7.62mm PKT machine gun
Machine gun
A machine gun is a fully automatic mounted or portable firearm, usually designed to fire rounds in quick succession from an ammunition belt or large-capacity magazine, typically at a rate of several hundred rounds per minute....
with 2,000 rounds, all mounted coaxially in the turret. The main gun elevates from −5° to +60°. There are also two 7.62mm PKT bow machine guns, again with 2,000 rounds each. The BMP-3 is capable of engaging targets out to 5,000–6,000 meters with its ATGM weapon system 9K116-3 "Basnya". If the missile launcher is destroyed, missile guidance ceases and the missile may miss its target. The minimum engagement distance, flight time and vulnerability of launcher are typical of command-guided, rather than fire-and-forget
Fire-and-forget
Fire-and-forget is a third-generation method of missile guidance. The military uses the term for a type of missile which does not require further guidance after launch such as illumination of the target or wire guidance , and can hit its target without the launcher being in line-of-sight of the...
, ATGM systems; most systems in service are command-guided. With conventional ammunition, such as the HE-Frag shell
Shell (projectile)
A shell is a payload-carrying projectile, which, as opposed to shot, contains an explosive or other filling, though modern usage sometimes includes large solid projectiles properly termed shot . Solid shot may contain a pyrotechnic compound if a tracer or spotting charge is used...
3OF32, the 2A70 gun has a range of 4,000 meters. The 3BM25 APFSDS round can also be used. 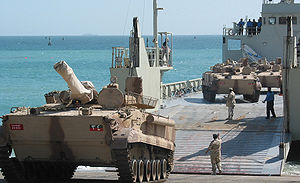 According to the manufacturer's web-site, all weapons can be fired from the halt, on the move, and afloat with the same effectiveness. The ability to hit targets on the move with missiles was successfully demonstrated during competitive evaluations in the UAE in 1991.

The turret is fitted with the 2K23 system which consists of an automatic loader with 22 rounds (the remaining 18 rounds are stored in the hull), a ballistic computer 1V539, a cross-wind sensor, a 2E52-2 stabilising system, the 1D16-3 laser range finder, the 1K13-2 gunner's sight/guidance device, the PPB-1 gunner's sight and an OU-5-1 IR search light. The commander has a combined optical sight 1PZ-10, a day/night vision device TKN-3MB and an IR search light OU-3GA2. Since 2005, the BMP-3 can be fitted with a new fire control system from "Peleng" Joint Stock Company from Belarus. This consists of the SOZH-M gunner's main sight with integrated laser range-finder and missile-guidance channel, the Vesna-K targeting system with thermal imaging camera and automatic target tracker AST-B, an armament stabilisation system, a ballistic computer with data input sensors and a PL-1 IR laser projector.

Early models were powered by a 450 hp engine UTD-29, but most BMP-3s are equipped with the 500 hp UTD-29M version. The engine was developed at the Transmash Diesel Engine Plant in Barnaul.
The BMP-3 can pass more than 300 km without stopping or realigning equipment, further, it has built in toilet inside the hull for crew to use.

The hull and turret are made of aluminium, with the front being provided with a layer of spaced armor. Over the frontal 60 degree arc the vehicle is protected against 30 mm armor-piercing rounds of 2A42 gun at a range of 300 m. In an effort to improve battlefield survivability the fuel tanks are also located in the floor of the vehicle.

The BMP-3 can lay its own smoke screen by injecting fuel into the exhaust. A chemical agent detector, an FVU filtration system, an automatic fire extinguisher and six smoke grenade launchers 81mm 902V "Tucha-2" are standard.

An ERA reactive armour
Reactive armour
Reactive armour is a type of vehicle armour that reacts in some way to the impact of a weapon to reduce the damage done to the vehicle being protected. It is most effective in protecting against shaped charges and specially hardened long rod penetrators...
kit is currently available providing increased protection, however, using ERA on a IFV is considered problematic by some experts since it can possibly pose a threat to friendly troops located in the vicinity of the vehicle.

The BMP-3 has also an ability to carry Shtora electro-optical jammer that disrupts semiautomatic command to line of sight (SACLOS) antitank guided missiles, laser rangefinders and target designators. Shtora is a soft-kill, or passive-countermeasure system.


The turret of the BMP-3 has been fitted to the Patria Armoured Modular Vehicle.

The majority of BMP-3s are in use outside of Russia with the United Arab Emirates being the largest foreign operator: